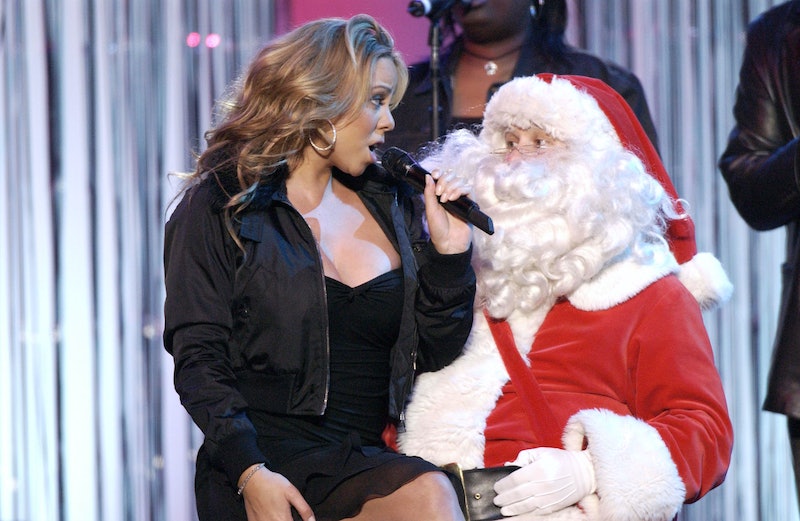 Mariah Carey is the Undisputed Queen of Christmas. Seriously, can you think of anyone else, other than Santa (maybe), who publicly advocates for Christmas as much as Mariah Carey? NO, YOU CAN'T BECAUSE MARIAH RULES THE HOLIDAYS. A Mimi Christmas record is a must for everyone, not just her fans. I know this because my mother "does not care for Mariah Carey" and yet you can still hear "All I Want For Christmas" being played in her house every December, which is exactly as it should be. No matter your opinion on Mariah, you can't deny it: She's the Christmas Queen.

Mariah Carey is to Christmas what turkey is to Thanksgiving. She is what fireworks are to the 4th of July. She is what the bunny is to Easter. Forget Santa—Mariah is the magical entity that makes the holiday season all the more exciting. It's not like you're waiting for anyone else to belt it out at the Rockefeller Center tree lighting, are you? She's the Mrs. Claus you never saw coming, Christmas' ultimate cheerleader, believer and bringer of glittery things! OK, I'm getting worked but, but if you're in doubt, ask yourself: What would Christmas be like if Mariah didn't exist? You're probably weeing in your own pants right now, as that is how terrifying that alternate reality would be. To further convince you, here are 23 reasons why Mariah is the Undisputed Queen of Christmas.

1. BECAUSE SHE IS CHRISTMAS' ULTIMATE HYPE MAN

4. WHICH SHE'S TOTALLY SELF-AWARE OF

5. EVEN HER ACCESSORIES ARE FESTIVE

6. BECAUSE IT'S POSSIBLE SHE'S ACTUALLY MRS. CLAUS, AND MRS. CLAUS IS THE QUEEN OF CHRISTMAS

7. DO YOU THINK SANTA WOULD LOOK AT SOMEONE WHO WASN'T THE QUEEN OF CHRISTMAS LIKE THIS?

9. BECAUSE BEING FESTIVE IS A LIFELONG COMMITMENT FOR MARIAH

10. SHE KNOWS HER REFERENCES

11. BECAUSE SHE'S THE ONLY ANGEL YOU WANT ON TOP OF YOUR TREE

12. BECAUSE SHE OWNS CHRISTMAS R&B

13. AND SHE'S EVEN GOT CHRISTMAS TUNES FOR THE LONELY HEARTED

14. BECAUSE FOR CHRISTMAS SHE GAVE US THE JOY OF HER BEING CONDESCENDING TO JUSTIN BEIBER

15. BECAUSE THERE'S NO ONE ELSE THAT COULD LOOK THIS GLAMOROUS NEXT TO A DANCING ELF

16. BECAUSE NO ONE CAN COMPETE WITH MARIAH WHEN IT COMES TO CHRISTMAS SPIRIT

17. SERIOUSLY, YOU CAN'T ARGUE WITH THE NUMBERS

18. BECAUSE NO ONE ELSE LOOKS THIS ADORABLE DANCING IN THE SNOW

19. AND ABSOLUTELY NO ONE ELSE CAN PULL OF CHRISTMAS TWERKING

20. BECAUSE EVEN AT HALLOWEEN, SHE'S IN THE CHRISTMAS SPIRIT

21. BECAUSE JUST WHEN YOU THOUGHT SHE WAS OUT, SHE PULLED YOU BACK IN

22. BUT MOSTLY BECAUSE DUH

23. ALL WE WANT FOR CHRISTMAS IS MIMI