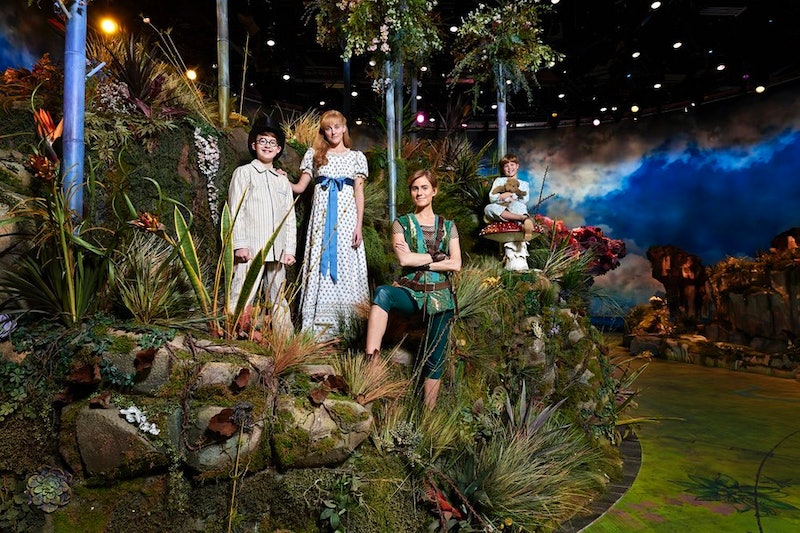 Last winter, NBC took a risk and aired a live musical production of The Sound of Music, appropriately titled The Sound of Music Live! Musical theater lovers and hate-watchers alike gathered 'round to watch Carrie Underwood belt it out as the beloved Maria to the tune of 18.62 million viewers. So, NBC did what any other TV network would do after seeing those numbers — the peacock network ordered another family-friendly live musical from exec producers Neil Meron and Craig Zadan, the duo that produces the Academy Awards. This year, Girls actress Allison Williams will step into some boyish tattered greens in Peter Pan Live! premiering Thursday night. But that won't be the only night you can see Williams fly: NBC will air Peter Pan Live! a few more times before Christmas.

NBC being the network that it is, you know it will definitely give you another opportunity to see Williams as the Boy Who Never Grew Up and Christopher Walken as a tap-dancing Captain Hook. Just how many times will you be able to indulge your inner child, poke fun this musical extravaganza, and relive any live-on-the-air flying gaffes? Because believe me, you'll probably want to — you've seen the commercials, right? You can visit Neverland more than once in the following ways.

Already have a hot date to a holiday party on Thursday night? And every night for the next week? Never fear, you popular people — NBC will rebroadcast Peter Pan Live! on Saturday, Dec. 13. Of course, this won't have the thrill of being live and could be edited. But if you absolutely can't see it live, because you have a life and don't have a DVR, here's your next option.

Can't wait so long for NBC's re-airing? I hear ya. By then, you'll already be spoiled and tired of all the GIFs and live-tweets floating around about it. You can then opt for streaming the special online. Last year's Sound of Music Live! was available on NBC.com and Hulu the next day after it aired. Again, this won't be live and could be edited, but you'll at least understand what everyone was live-tweeting about.

For now, you can stream last week's Making of Peter Pan Live! special to get your Neverland fix.

Get It On DVD

If last year's Sound of Music Live! is any indication, we can definitely expect Peter Pan Live! available for purchase on DVD about a week and a half after its original broadcast. Amazon lists the musical extravaganza as currently available for pre-order and the DVD will be released on Tuesday, Dec. 16 for repeat viewings — ironically and/or unironically. Either way, don't worry — I won't judge.

If you fall in love with any of the new or old songs from the telecast, Broadway Records will be releasing the Peter Pan Live! soundtrack also on Dec. 16. I won't judge you for ordering that, either.