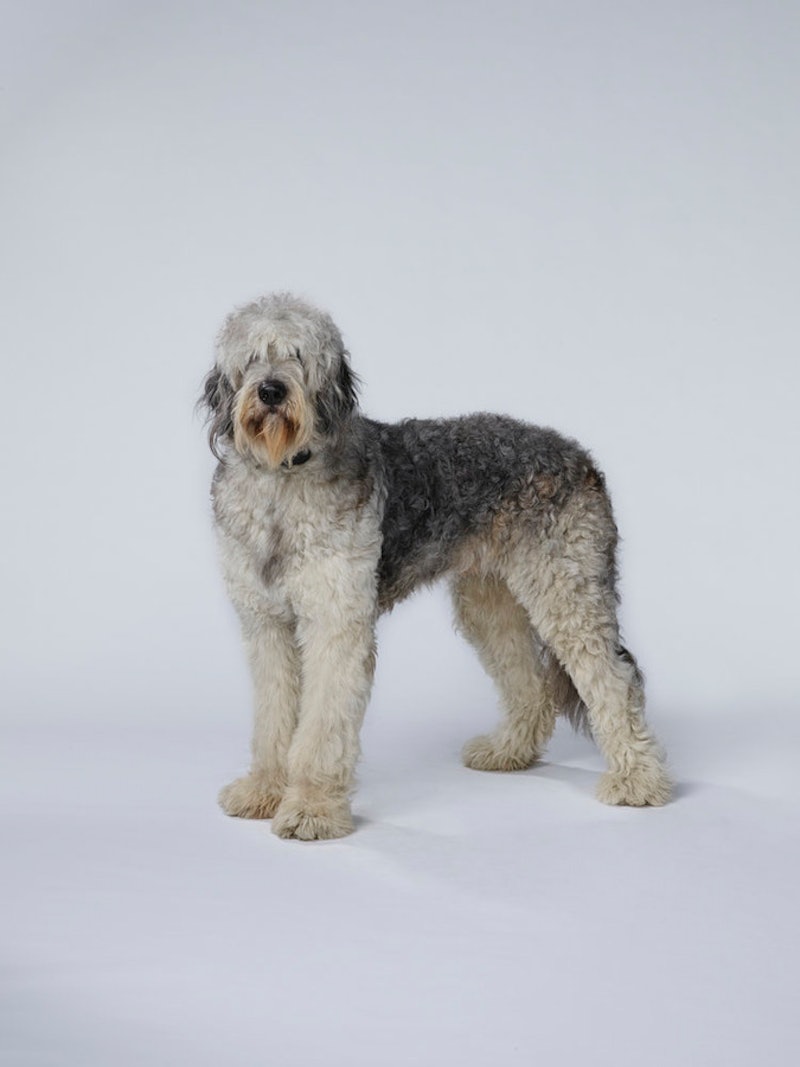 When Peter Pan is performed on the stage, there are many unique traditions it usually follows. The first and foremost: The title role is almost always played by a woman. NBC's following that one in Thursday night's musical special Peter Pan Live! where HBO's Girls star Allison Williams will embody the Boy Who Never Grew Up. Another Neverland tradition from the stage is that the Darling's family dog Nana is usually played by a human in a dog suit. Laugh all you want at that poor actor on stage during other performances, because Peter Pan Live! exec producers Neil Meron and Craig Zadan decided to cast a real, live dog as Nana: musical pro Bowdie The Dog.

That's right, this cannine is all about the Great White Way. Bowdie, who was born last February, is owned by theatrical animal trainers William and Dorothy Berloni. William "Bill" Berloni is best known for training the original Sandy for the Broadway show Annie when he was just 20 years old. Since then, he's been training animals for the stage — and now screen, for Peter Pan Live! and HBO's The Leftovers. He even trained the new Sandy in the new feature film version of Annie starring Jamie Foxx, Cameron Diaz, and Quvenzhané Wallis.

But back to Bowdie — the Berlonis have also trained him for Because of Winn-Dixie, a new musical by Duncan Sheik and Nell Benjamin that's in the process of being workshopped.

Here's what else we know about your soon-to-be new favorite pooch:

In last week's Making of Peter Pan Live! special, Meron admitted that this is the first time he's used a real dog in any production and, of course, that comes with risks. But it also comes with record amounts of cuteness. Berloni has trained the pup to know its cues as Nana during certain lines and it looks like it's going to be adorable.

But most dog-actors do. "We always have one, but we never want the understudy to go on," Berloni told Classticalite. "We try to avoid that at all costs. We spend so much time getting the actor and the main dog up to speed, so putting an understudy on, whether human or dog, upsets that balance."

Checking out the competition or supporting NBC? If only this dog could talk.

Peter Pan is Cool With Bowdie

The dog has definitely gotten in good with the musical's star, Williams. I mean, how could Bowdie not?

As a key member of the Darling family, Bowdie has been working with Taylor Louderman (plays Wendy Darling), Jake Lucas (plays John Darling), John Allyn (plays Michael Darling) and they look like they're having a blast with the pup.

The cast seems to love posing and posting about this pooch to social media, but can you blame them? The Lost Boys are played by a whole crew of Broadway alums, including former Newsies stars Jacob Guzman, David Guzman, Ryan Steele, Daniel Quadrino, and Garrett Hawe.

O'Hara and Borle can't get enough of this lovable puppy, either. The duo play Mr. and Mrs. Darling — while Borle also plays Smee in Neverland — but you might recognize them from other roles. This isn't Borle's first foray into live musical theater on NBC — he starred in the short-lived series Smash on the network and as Max Dettweiler in last year's Sound of Music Live.

O'Hara has been nominated for a Tony Award five times and most recently portrayed of Francesca in the Broadway musical adaptation of The Bridges of Madison County.

It looks like it was the right choice for the producers to go with a real dog. After all, an actor in a dog suit wouldn't be nearly as much fun, would it?

More like this
Idris Elba "Breaks Out" Of London In 'Luther' Film First Look
By Sam Ramsden
Here’s Everything Coming To & Leaving Netflix In December
By Jake Viswanath
Idris Elba & Tom Hollander Lead This Year’s Must-Watch Christmas Flick
By Maxine Harrison
Robert Downey Jr.’s New Film Is A Tender Story of Fatherhood & Forgiveness
By El Hunt
Get Even More From Bustle — Sign Up For The Newsletter