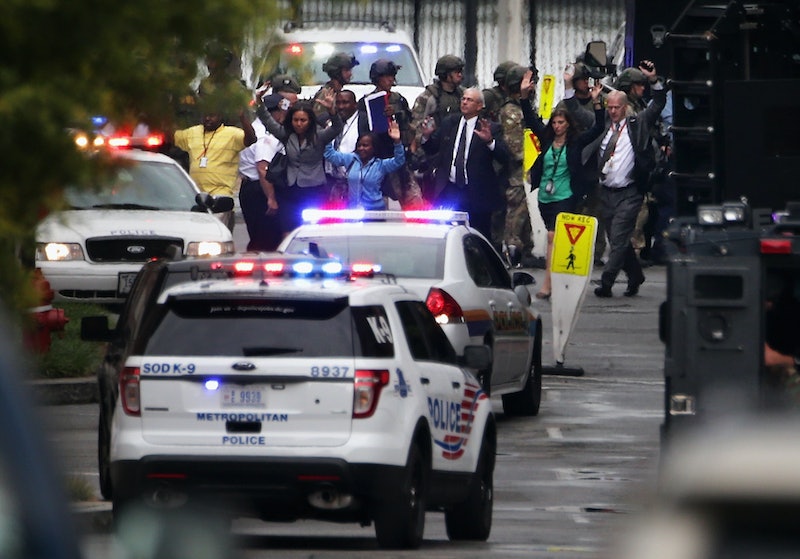 On Monday morning at 8.20 a.m., one gunman began shooting, apparently at random, at the Navy Yard in Washington, DC. He killed at least 12 people, and wounded an unknown number of others.

The shooter, who died amid the gunfire — it's not yet clear exactly how — has now been identified by the FBI as Aaron Alexis, a 34-year-old from Texas. He brings the death toll to 13, and officials have confirmed that there were no other gunman involved, as was originally reported. The Senate has locked itself down following the incident, citing "uncertainty."

Two police officers were shot, said authorities, and three more people are in critical condition. Police officials are updating press every two hours. At the last conference, the police chief spokesperson said that no motive was yet known, and that there was no evidence that this was a terrorist attack. They also confirmed that there was not more than one gunman. It appears that Alexis had a criminal record in Texas, apparently from discharging a gun on Sept. 5, and he appears to have been able to enter the Navy Yard by using someone else's identified card.

The Senate sent out a mass e-mail locking down the premises around 3 p.m., meaning that those who are those can move between buildings, but can't leave the site. This will be in effect until we deem the situation safe in the neighboring community,” said the e-mail. “We do not have any information to suggest the Senate, its Members, or staff are in any danger, but out of an abundance of caution, we feel this is the best course of action to keep everyone safe.”

In his planned Monday speech regarding the economy, President Obama spoke about the tragedy.

We still don’t know all the facts. But we do know that several people have been shot, and some have been killed. So we are confronting yet another mass shooting. And today it happened on a military installation in our nation’s capital. It’s a shooting that targeted our military and civilian personnel.

These are men and women who were going to work, going their job protecting all of us. They’re patriots. And they know the dangers of serving abroad, but today they faced the unimaginable violence that they wouldn’t have expected here at home.

The president has been vocal about his attempts at gun-control reform, which had been amped up after the December shooting last year in Sandy Hook, Connecticut. During his ABC appearance Sunday, Obama noted that "80-90 percent" agreed with his proposed reforms, but a minority within the Republican party stopped the bill from advancing further. This incident, however, is prompting new calls for reform. Each time a mass shooting occurs, noted BuzzFeed, the NRA conducts a self-imposed "Twitter blackout."

One witness had this to say about the shooting:

The Navy Yard is the largest shore site belonging to the U.S. Navy, and is used for ceremonies and as administrative headquarters. The site has 3,000 employees. Hundreds of police officers and press gathered at the scene.

Reagan National Airport has reportedly put all flights on standby. Most of those shot appear to have been civilians, but at least two police officers have been wounded as well.

Capitol Hill has also upped its security, though officials said there were no known threats at the site.

The incident is eerily reminiscent of the Fort Hood shooting of 2009, during which a jihadist Army major and psychiatrist, Nidal Malik Hasan, opened fire at the Fort Hood military base in Texas. Then, 13 people were killed, and 30 more injured, making the incident the biggest mass shooting to ever occur at an Army base. At the end of August this year, Hasan was handed down the death penalty.