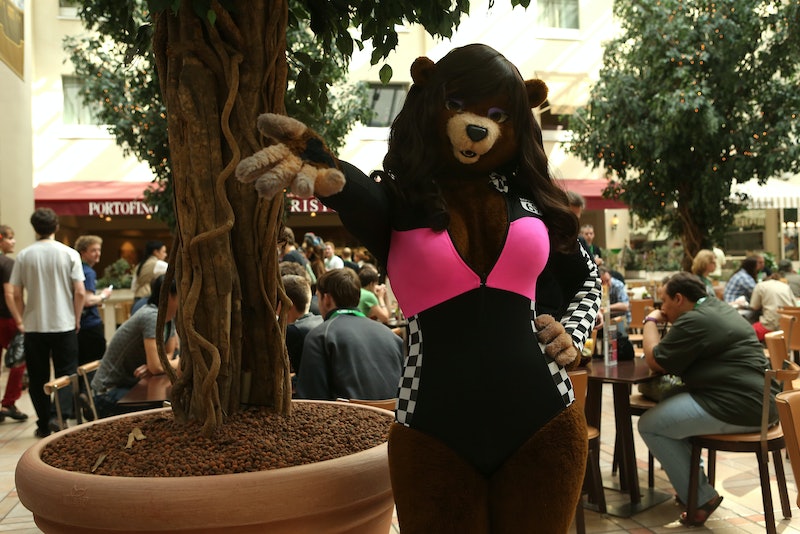 I am a very hairy woman. This is, I'm assuming, at least partially because I am Greek, if that helps you with the imagery at all. I accept and even celebrate my inherent hairiness (inHAIRent? I'll see myself out.) now, and the wonderfully expanded view it's given me of what constitutes "femininity" and "female beauty"—but that wasn't always the case. When I was in primary school, the mean kids would call me werewolf when I exposed my arms. (Kids are seriously the worst and, looking back, I have no idea how any of us made it out of school with a shred of self-esteem intact, but that's beside the point. Kinda.) In high school, it was "DJ Gorilla" or "Unleash your beast", the ongoing joke being that I was a man on account of how hairy I am.

Now, I'm not looking for sympathy. I have spent 29 good years in this body and it's hairy as shit and I'm OK with that. I wax, I bleach and I shave, but I'm not as upset about my hairiness as you'd think. Yes, that's mostly because I'm lazy and can't be bothered. Sometimes I will just let my moustache be there because I can't force myself to go buy wax. This is obviously part of the "acceptance" phase of my relationship with my body hair. Again, I'd like to reiterate that said acceptance isn't about reaching some higher level of zen or self love, it's literally just about having too many other things that are far more worthy of my worry.

This wasn't always the case: I spent most of my teen years horrified by what a hideous, hairy beast I was. The aforementioned name-calling really didn't help. I would obsessively bleach and shave and wax before any occasion at which my body would be exposed (a pool party, for instance). I used to have my arms waxed regularly and I made my mum swear on my life that one day she would pay for me to have laser hair removal on my snail trail (still never happened, mum, I'm looking at you). Being a hairy lady is hard, especially when unrealistic standards of beauty in the media would have you believing that every grown woman is as free of body hair as she was the day she slid out of the womb. Oh, how younger, less self-accepting me would've loved to have had the slick, hairless body of a Victoria's Secret Angel! If you're a hairy-ass lady, don't sweat it (seriously sweat plus excessive body hair is not a fun recipe for BO)—There are worse things than being hairy. Being mean or racist or having incurable foot fungus, for example. Regardless, there are still struggles that go along with being a woman who is blessed with excessive body hair. Here are 6 of them:

1. EVERYTHING ABOUT HAIR REMOVAL

I'm not saying that only super hairy women understand hair removal (because, clearly, most women get it to a certain extent) but talk to a hairy girl about hair removal and it's like talking to Neil deGrasse Tyson about the universe—girl will know more than you knew there was to know.

2. THE ULTIMATE SORROW OF A HAIRY LOWER BACK

Nothing bums a hairy girl out more than having a hairy lower back. Maybe a snail trail on her tummy. My mum calls my hairy lower back my welcome mat which never ceases to gross me out. I had one ex-boyfriend who would stroke it, like it was his pet, which also made me feel wildly uncomfortable. It's the thing I was most ridiculed for growing up. While I've never waxed it, I have contorted myself into some pretty weird positions trying to bleach it. Hairy girls will understand: it's not that your back hair makes you feel gross or insecure, it's that having it there makes you feel genuinely melancholy, because your back is like a dude's back (or at least what you've been taught a "dude's back" is supposed to look like, compared to what a "woman's back" is "supposed" to look like, all of which is super unfair and weird and leads to you needlessly hating something on your body). And no matter what you do to it the fact is the genetic lottery gave you a merkin on what's supposed to be a very sexy part of a woman's body.

A hairy girl probably spent the majority of her formative years (the ones where the most bullying happened) fake tanning the crap out of herself based on the logic that if she somehow could bring the color of her skin closer to the color of her body hair, somehow the body hair would look less obvious. Note to hairy self-tanners from a former hairy self-tanner: this logic is extremely flawed.

4. BURNING YOURSELF WITH BLEACH

I went to high school with a Greek girl who had to take a week off school because she burned her face trying to bleach the thick black hairs on it. This girl had pube-like sideburns, and when she finally recovered from her injury, the bleach, even though left on way longer than it should have been, only managed to turn the hairs orange, rather than the angelic, diaphanous white a hairy girl hopes for. I've definitely substituted my upper lip hair for a red bleach burn scab before, and even the most veteran bleacher can make a boo-boo. Bleach is like cocaine. Once you put a little under your nose, you convince yourself that a little bit more, then a little bit more, a little bit more, will make everything better—which usually works out about as well as when you do it with cocaine.

Every time I tell a blonde I wax my thighs she makes this little surprise sex noise and goes "Oh! I didn't know people did that!" before proceeding to lift her skirt and show me the barely noticeable to the naked eye smattering of translucent down on her thighs. This reaction from blondes always inspires the rage fantasy in my head in which I put a giant, hairy Greek witch curse on her and she wakes up in the morning all Teen Wolf, screams into the mirror, cut to me hunched over a cauldron in my hovel, laughing maniacally while stroking my beard.

The sad fact of being a hairy girl is that no matter how much you wax, bleach and shave yourself, you can't avoid that 5 o'clock shadow. It's there on your legs, right after a shave. The heads of thick black hairs waiting just under the surface of the skin. A couple of weeks after waxing, there they are again. Likewise, when bleached hair starts to grow out, especially on your longer arm hairs, the new growth looks even more prominent against the few bleached hairs that are left. The battle against body hair for a hairy woman is constant and deep down in your bowels you just know: it can't be won. Which is why it's especially nice that the battle against hating your body hair definitely can be won.