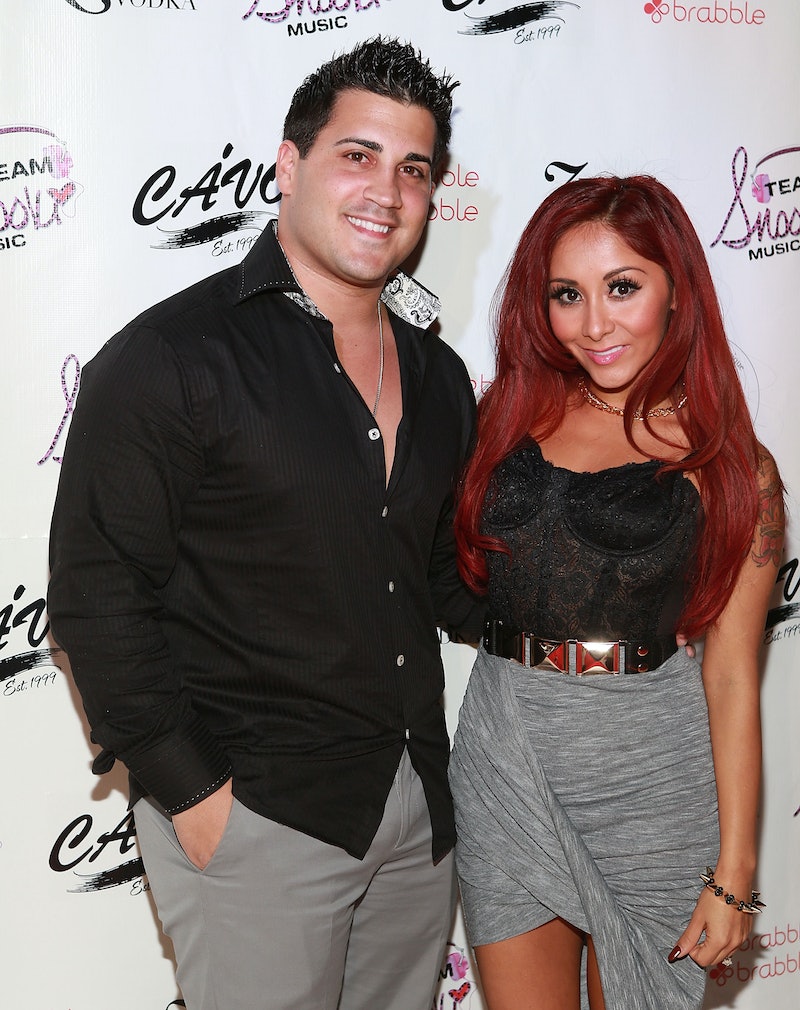 Snooki has really grown up before our eyes. I never expected the wild thing from Jersey Shore Season 1 to get it together and become the business woman, mother, and wife that she is today. Yep, wife. Nicole "Snooki" Polizzi married longtime fiancé Jionni LaValle on Saturday, Nov. 29 in Garfrield, N.J. I am not at all shocked that the twosome got married in the garden state. Still, I had no idea what to expect from a Snooki wedding. I did not know if the bridesmaids would be wearing animal print gowns or if Snooki would revert back to her signature hair poof.

But this is a mature Snooki we're dealing with, and the newly minted Mrs. LaValle decided to keep everything classy and timeless with a Great Gatsby-themed wedding full of black and gold colors. There was even a scotch and cigar bar. But don't worry, our girl Snooks didn't leave her reality show roots behind. Cast mates Jenni "JWoww" Farley, Sammi "Sweetheart" Giancola, and Deena Nicole Cortese, all served as bridesmaids in the wedding — complete with Great Gatsby-inspired headbands. As a fan of the early Jersey Shore seasons, that really melts my heart. And I was especially touched when I found out that DJ Pauly D and Ronnie Magro were also present for the nuptials. I want to know more about the wedding. And a picture is worth a thousand words, so let's check out the Snooki wedding album.

1920s Hair for the Rehearsal Dinner

Snooki classed it up with some beautiful curls and a white dress for the rehearsal dinner. But don't worry, there's still glimpses of the Snooki we know and love with that shoulder tattoo peaking out.

From Roommates to Bridesmaids

Nothing makes me happier than Snooki having JWoww, Deena, and Sammi as bridesmaids in her wedding. Here they are at Snooki's rehearsal dinner.

Why wear mascara to elongate your lashes when you can just add more lashes? Snooki took things up a notch with these stunning eyelash extensions. As a limp-lashed individual, it's safe to say that I am jealous.

It's officially official. Snooki showed off the couple's wedding rings and her beautiful manicure complete with rhinestones.

Now this is the picture I was really looking forward to! It's so good to see Snooki back in action with cast mates Ronnie Magro, JWoww, Deena, Sammi, and Pauly. I wonder where The Situation was. But then again, I also don't.

Ronnie accidentally matched with JWoww's fiancé Roger Matthews and they took the twinning even further with this hilarious pic stitch. I thought the bride is the only one who's supposed to wear white at a wedding...

The LaValles really know how to run with a theme. Aside from the clothing and accessories, Jionni found a way to add a touch of Gatsby to the flowers with some peacock feathers.

I'm not sure why, but something about this tweet just gave me the giggles. I wonder how this guy knows Snooki and Jionni.

The LaValles posed for a photo during the ceremony. What a beautiful couple!

You May Kiss the Bride

A wedding album wouldn't be complete without this shot. What a romantic moment!

Even though Snooki tried her best to keep things classy at her wedding, she is Snooki after all and isn't afraid to hit up McDonald's post-wedding. A girl after my own heart. You do you, Snooki.