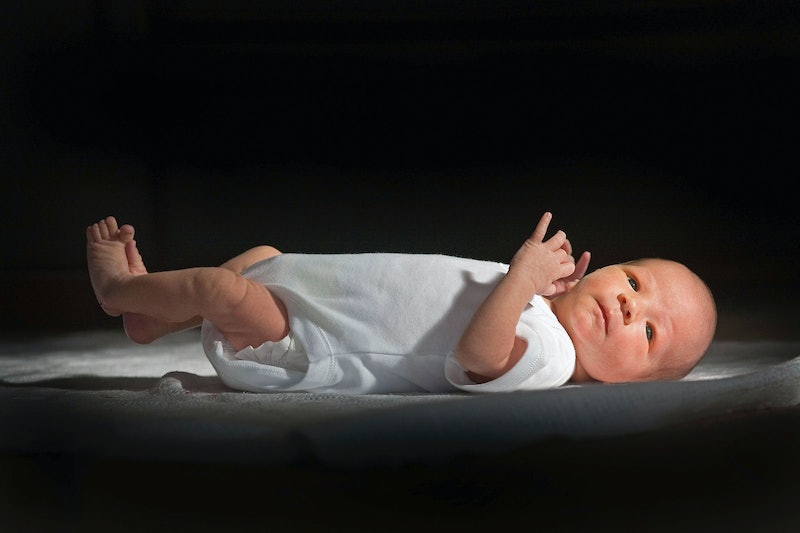 We at Bustle love giving you tips for how to tap into your sexual potential and troubleshoot when things aren’t going your way in the bedroom. But what about finding solutions to those stressful sexual health situations that inevitably crop up when you’re getting down. Emma Kaywin, a Brooklyn-based sexual health writer and activist, is here to calm your nerves and answer your questions. This week’s topic: Should I freeze my eggs by age 30?

Q: I’m a 27 year old woman who is not interested in having kids right now, but is very excited to have them someday. However, I know that if I wait too long, it can be harder to get pregnant, right? And I’ve also heard that you’re more likely to have a kid with certain conditions if you get pregnant later in life, although I don’t really get why that is. I’ve been thinking about freezing my eggs by age 30, but I really don’t know what it entails, or if I’m even too late to do that at my age. Can you explain how egg freezing works and give me some more information to help me make this serious life decision?

A: Tick tock goes the biological clock, but when do we have to stop slamming the snooze button and get a move on? A great question, because many of us in our twenties (and thirties and yes even forties) are busy doing many things that don't include preparing to be parents. Luckily, fertility specialists have been working to develop techniques that allow people born with female reproductive organs to cheat the clock a bit. Oocyte cryopreservation, commonly known as egg freezing, is one such method.

First, a brief note: Before we get into what egg freezing does and what it’s like, I want to say that I'm going to be talking about age a fair amount in this article, since much of the science of fertility has to do with how your body ages over time. This in no way means that you SHOULD have kids at any particular age, or even at all. The decision to get pregnant — and I really hope that for you it’s an actual decision, although of course we all know that the best-laid plans are sometimes disrupted by, well, other types of laying — is yours to make, regardless of how old you are. Don't let anyone tell you anything different.

What is Oocyte Cryopreservation?

Let’s break down the name: an oocyte is an immature ovum or egg, and cryopreservation is a process wherein someone freezes your cells for the purpose of preserving them so you can reactivate them later (think Austin Powers). So, oocyte cryopreservation is the process of freezing your unfertilized and immature eggs for the purpose of protecting them now and using them later, when you’re good and ready. Oocyte cryopreservation has been going on successfully since 1986, and the process was recently deemed no longer experimental.

All humans who are born with female reproductive organs start out with a set amount of immature ovum (eggs) — around 2 million, waaaaaaaay more than anyone will ever need. Around 300,000 of these will still be around at puberty, at which point your body matures and releases an egg every month-ish, in a process called ovulation. If, when your mature egg is set free, sperm is present, they can combine into an embryo, which implants into your uterus and grows into a real, live baby. The miracle of life!

In oocyte cryopreservation, many eggs (ideally 20-25) are harvested from your body all at once and immediately frozen, so you can grab them later when you’ve found some sperm you like — whether attached to a human you also like or not, that’s up to you — and have decided you’re ready to be a parent. Your eggs are mostly stored through a recently developed quick-freeze process called vitrification, which allows them to be frozen and unfrozen without their substantial water content crystallizing and ruining their viability. When you unfreeze your eggs, they are as youthful as you were when you froze them back in the day, and you can use them to make your very own baby.

When you're ready to become a parent, your eggs will be unfrozen and you will undergo in vitro fertilization (IVF). IVF is when an egg and sperm are combined in a laboratory setting (in vitro means outside the body) and then implanted into the uterus to grow naturally into a wee one.

why does age matter?

The reason we care about how old our eggs are is that it matters for reproductive success in a couple of different ways.

Fertility in female-bodied folk is at its peak when we’re young and nubile, and declines over time. While an individual’s reproductive time frame can differ greatly depending on a number of factors, including the number of ovum present at birth, average fertility declines starting in the mid 30s. By age 40, research indicates that the average success of natural conception is less than five percent each month, due completely to the aging of eggs.

Having a Healthy Baby

Even if you are able to conceive as an older person, you can experience a number of hurdles to birthing a healthy tiny human. Later-age pregnancies are more likely to result in miscarriage, with women over 40 more than twice as likely to miscarry than women in their 20s. These pregnancy losses are often due to genetic disorders that occur in older women’s eggs, which don’t divide as smoothly during cell growth. The risk of genetic defect goes up significantly after age 35 — research has found that only 5 out of 1,000 women aged 33 will have a child with genetic abnormalities, but that number goes up to 25 out of 1,000 for women aged 40. In addition to miscarriage, chromosomal abnormalities can result in genetic disorders such as Down Syndrome.

So, from a reproductive-only perspective, it makes sense to have a baby in your 20s. However, since your uterus doesn’t get less able to carry a baby as it gets older, if you freeze your eggs so that they remain youthful, you can cheat a bit and become a 40 year old parent using your 20 year old eggs. Sounds good right?

How Well Does It Work?

The good news here is that the research shows that oocyte cryopreservation works! Scientists have found that eggs preserved using current freezing methods have similar pregnancy success rates as “fresh” (aka non-frozen) eggs placed via IVF. One clinic has demonstrated that 80 percent of their frozen eggs unfreeze well, and that 80 percent of those are successfully fertilized. Further research has shown that freezing doesn’t result in higher rates of genetic abnormalities. So basically, the process is safe, and has been used to make around 5,000 babies to date.

If this all sounds too good to be true, that’s kind of because it is. See, before you can freeze your eggs, you need to get them out of your body. This process, which is the same as what you would do if you were undergoing IVF, is extremely intense. It takes anywhere from four to six weeks: two to four weeks of self-administered hormone injections (let's hope you're not afraid of needles) and oral birth control to halt your normal hormones from doing their normal cyclical thing, then nearly two weeks of daily hormone injections to mature multiple eggs at once (usually 20-25 for women in their 20s). Once your eggs are all ready to go, they are removed from your ovaries with a needle through your vagina — (they knock you out while they do this, so this part doesn’t hurt). You also can't smoke or drink for three months prior to the start of the process, so that's something to consider as well.

Now think about that regimen for a moment, particularly if you’ve ever had less-than-fun reactions to other hormonal therapies such as oral contraceptives or Plan B (the morning after pill). The hormones in the pre-egg freezing cocktail during ovarian stimulation are way stronger and even more intense. Yes, you only have to take them for a few weeks, but on the other hand, they could drive you totally batshit in that time frame. Side effects of ovarian stimulation medications can include irritation at the site of injection along with depression, hypertension, pain in the chest, joints, and/or bones, and libido loss. Those are some serious side effects.

Another thing to consider is how much freezing your eggs will cost. If you work for Facebook or Apple, you were recently given up to $20,000 to freeze your eggs, so go party until the next section. For the rest of us, the fees vary but most aren’t covered by insurance — overall, you can expect to pay anywhere from $7,000 to $15,000 for the procedures and another $2,000 to $6,000 for medications, not to mention an annual storage fee for your frozen eggies, which will be in the $500 range. And of course, once you want to actually use your eggs, IVF costs around $5,000 — and you may need to do this more than once before you’re successfully impregnated.

The research shows that if you want to have kids, younger eggs are better eggs. If you don’t want to have kids when your eggs are at their prime, oocyte cryopreservation is an option you can consider, and the research shows it’s safe and pretty effective (although vitrification is a new process so researchers haven’t been able to track long-term effects as of yet). However, there are some significant physical and pocketbook considerations to weigh, because freezing your eggs is a real deal procedure involving powerful hormones that is so high-cost that it's basically just an option for the most privileged. If you think you can handle it, talk to your doctor about your options, or find a fertility specialist to assess your viability.

If the side effects and/or cost of oocyte cryopreservation seem prohibitive to you, but you're still jonesing for a baby in the distant future, I challenge you to do some soul-searching about why it's so important for your baby to be made of half your DNA. There are 13,000 kids in the U.S. foster system right now who desperately need adoptive parents. Also, remember that your uterus will be capable of carrying a child way past your midlife crisis, which means that if your eggs are past their prime when you're ready to become a parent, you can grow and birth a baby with someone else's eggs (of course they will have to undergo the intense hormone and harvesting regimen, but egg donors tend to get paid well, because capitalism).

Of course, we have no idea what the technology will be like in 15-20 years — remember that vitrification itself is a really new process — so more cost-effective and/or less invasive options could totally exist by then. This is all to say that you have many options for making a family, and it's up to you to define how you want that family to look.