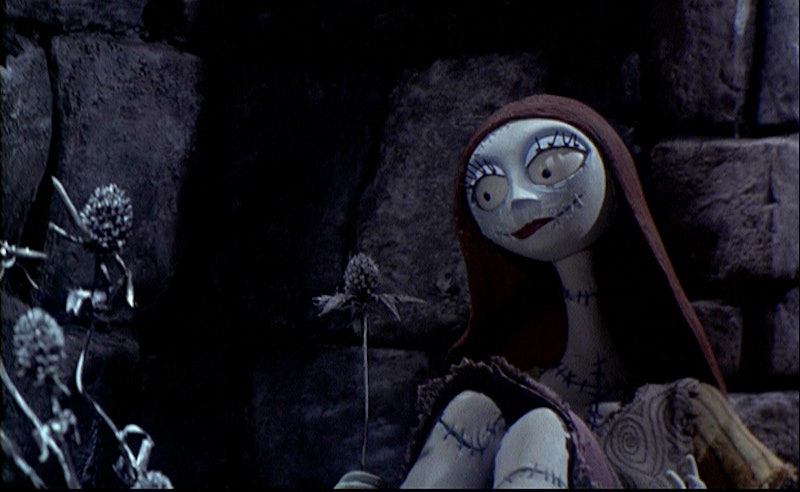 I know I'm 23, but I still wear my Jack Skellington hat this time of the year with minimal trepidation. I mean, I know we all have conflicting feelings about Tim Burton, yet I stand firm that The Nightmare Before Christmas remains a cross-holiday masterpiece. And it's not just because of the unique claymation stylings or the musical stylings of Danny Elfman, it's because it gave birth to one of the bravest, underrated characters of cinema. I am, of course, talking about Sally the Ragdoll.

While Jack Skellington, the adorably manic prototype of many men I've dated, is the primary protagonist, Sally remains first in my heart. First of all, she's voiced by comedy queen Catherine O'Hara. Second of all, she's a quiet misfit quietly observing from the the fringes of her community, and duh, that's kind of my job description. Yet what I find particularly remarkable, though, is that the meekest girl in town, a Frankensteinian figure no less, is also the strongest and smartest of the bunch.

Sally is a goth Disney Princess for the rest of us, and her principles are just as influential to me at 23 as they were at 13. Or three, if we're going to be honest. If you have any doubts about her wonderfulness, here are six valuable lessons she teaches about being a strong woman outside the confines of Halloween Town and in the real world.

From the get-go Sally makes strides to break the quasi-imprisonment of her creator/father-figure Dr. Finklestein, and this includes a scene, more horrifying when I get older, where she literally flings herself out the window. This is a big Do Not Recommend move for normal girls, and my heart stops beating until the moment her eyes flick back open, but the message is clear: free yourself from the shackles of stifling figures through any machinations possible. Sometimes that may require spiking your dad's soup with a potent dose of deadly nightshade. I don't judge.

Sally's ability to detach her limbs is a helpful attribute, but one that would be useless if she wasn't also a talented seamstress who could quite literally put herself back together in an instant. See: the aforementioned flinging scene. Likewise, some people consider me to be mildly to moderately funny (go figure), but due to pretty paralyzing social anxiety this skill is just barely useful in the real world. Luckily some people also consider me to be mildly to moderately good at writing, so in that venue, bringing in humor is both applicable and a major selling point.

Every woman has their own unique qualities, and finding a complimentary skill highlights that.

3. Provide the Voice of Reason, Even When It Gets Lost in the Din

Sally plays the Lisa Simpson role in Halloween Town, the skeptic, the weary buzzkill that's not-so ecstatic about this Christmas idea. While it's mostly a premonition-based bias, it's important nonetheless, and I understand the frustration of not joining in on the crowd's enthusiasm.

It's doubly frustrating and admirable that Sally isn't afraid to tell Jack, the rail-thin object of her affections, that this whole Christmas thing sounds like a bad idea. And I love Jack, but if you value logic and are attracted to whimsical, creative men, this is the kind of aneurysm-spurring nonsense you deal with on the regular. And ladies, if the guy you like says something like, "I'm thinking of being Santa Claus" or "I'm thinking about quitting high school so I can focus on my music career," do NOT be afraid to say something, even for your own conscience, and even if they blindly ignore you.

4. Prioritize the Greater Good Before Romance

I joked about this earlier, but Disney does own TNBC, and as Jack is the Pumpkin King, that actually places Sally in the traditional Princess role. She even gets her own song, but the subtext of said song is "I don't see any of this working out, including my feelings for that ridiculous man over there." That very much goes against the classic doe-eyed hope of Snow White or Cinderella. Not that Sally is void of positivity or doe-eyes, but she's very heavily married to realism, and not waiting for her prince — or king — to save the day. I mean, that guy is actually causing all this trouble in the first place.

So yeah, she has a crush, but she doesn't passively stand by and dwell on it. Instead, she pushes herself to act for a better cause, making a valiant effort to rescue Santa Claus.

5. Intelligence is a Virtue, but Bravery is a Choice

There's no question that Sally is an intelligent girl. Santa says it himself: "She's the only one who seems to make any sense in this insane asylum!" Intelligence, however, is an easy attribute to posses. Sally is shown to be one of the least aggressive women in Halloween Town (um, the witches? the swamp creature?) yet in spite of her shyness, she's the only one to speak her mind, to rebel against captivity, to try and save the day. Like detaching your leg without a sewing needle, craftiness, logic, and foresight are meaningless without action. Luckily Sally has it all, and that makes her my hero.

More like this
The 'Spiderhead' Movie Ending Is Nothing Like The Short Story It’s Based On
By Morgan Leigh Davies
Ottessa Moshfegh Is Happy To Be Your “It” Girl
By Arya Roshanian
'The Summer I Turned Pretty' Book Ending Is An Emotional Rollercoaster
By K.W. Colyard
5 Gripping Books To Read From Women’s Prize For Fiction Winner Ruth Ozeki
By El Hunt
Get Even More From Bustle — Sign Up For The Newsletter