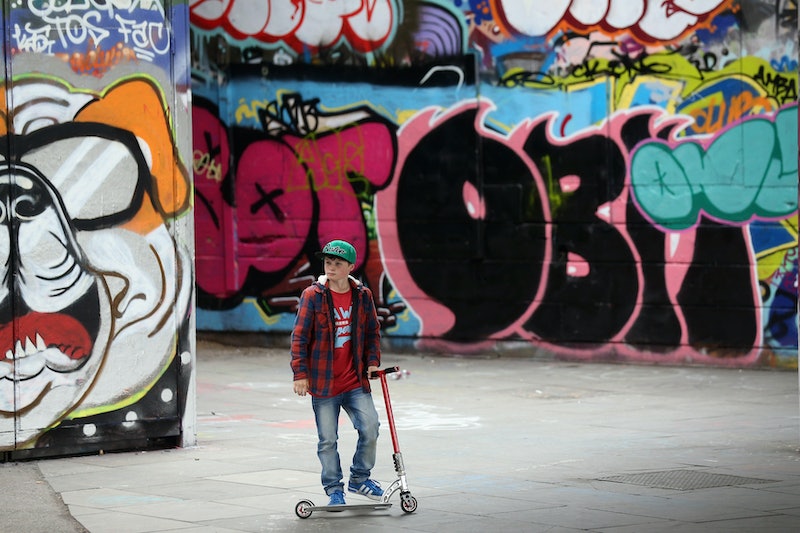 Well, consider your childhood ruined. A new study from Clinical Pediatrics shows that child toy-related injuries have risen 40 percent between 1990 and 2011, and one toy in particular is to blame for a lot of them. Scooters are really dangerous for kids, you guys. According to the study, that scooter you were all about on your 12th birthday accounts for a staggering 42.5 percent of admissions to hospitals between 1990 and 2011, and a whopping 34.9 percent of injuries in children overall. Just let that all sink in for a minute.

TIME reports this study is the first of its kind, analyzing children's injuries over time as opposed to the yearly analyses normally conducted by the Consumer Product Safety Commission. However, both reports from this year cite the scooter as the most dangerous toy, meaning there's little to no disputing we've been letting kids cavort around on screaming metal death trap machines as a form of transportation. Good job, everyone.

The president of the child safety group Safe Kids Worldwide told USA Today that helmets and kneepads can make scooters a lot safer for kids, who are already inherently accident-prone walking time bombs as it is.

Honestly, just knowing how dangerous those things are would make me super reluctant to buy one for my kid. Forget how generally annoying scootering children are, with their gleeful expressions and unbridled optimism for the future, this is about safety, damn it.

But if you think about it, it kind of makes a lot of sense that these things would be egregiously dangerous. You can accidentally: fall off of a scooter, scooter off a sidewalk, scooter into wall, scooter into traffic, scooter off a cliff, scooter into hell. It's actually probably easier to hurt yourself scootering than it is to scooter effectively as a form of transportation. The physics of the things are just way too precarious.

Forget about the Ripstick, i.e. the scooter without. freakin. handlebars. Have you SEEN those things?

Anyway, statistics prove scooters are supremely dangerous, but kids love them and they make a lot of money in the summer when our youth is most divorced from their inherent senses of mortality and self-preservation, so they probably won't be going anywhere any time soon. Hopefully parents will be wise enough to check the data on these things before buying what is more or less a guaranteed trip to the ER.

More like this
The Viral 'Little Miss' Franchise Is Focusing On Mental Health Next
By Darshita Goyal
11 Upper Back Exercises That'll Help You Stand Upright
By Carolyn Steber
How Did Pilates Become So Popular?
By Elizabeth Narins
How This Founder Inspired A New Wave Of Drinking
By Jordan Murray
Get Even More From Bustle — Sign Up For The Newsletter