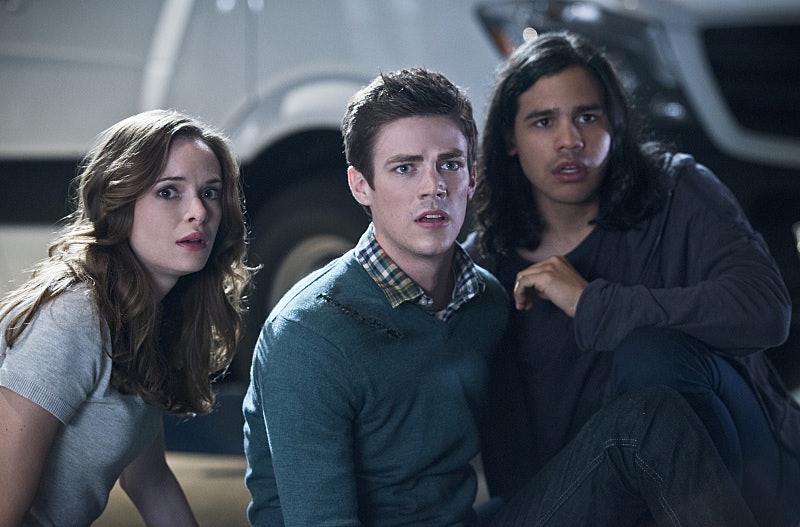 Barry Allen may be able to run fast with ease, but his love life is complicated. He's developed a romantic rapport with Felicity Smoak while still harboring feelings for Iris West, who, in the spirit of maximum comic book angst, is starting to fall for "The Flash" rather than the best friend who's under the mask. What about Barry and Caitlin Snow as a Flash pairing? They are both scientists. They get along well together on the team. They've shared dark secrets and discussed loss. Caitlin developed a liquor so strong that Barry could get a few seconds of buzz, so technically she bought him a drink. She's bossy and it's fun to watch the characters clash. Could those two nerds ever get it together in the shipping department?

A quick Google search will reveal plenty of fan material for Caitlin and Barry, but I'm not sold on this "OTP" no matter how you try to manipulate me with music and editing. I don't think I would riot on the streets of the Internet if it happened, but I don't think it's all that likely either. Perhaps they could have a "flash" fling or a meta-one night stand. Actually, Barry and Caitlin would make great platonic wedding dates. They'd have a blast on the dance floor and keep everybody guessing, but probably end up in separate hotel rooms by the end of the night. They have the chemistry, but not the lasting power.

Barry does not have all that many friends in Central City. Cisco and Caitlin don't have an angle or any hidden agenda. They aren't trying to be Barry's father, and Barry's going to need Caitlin on his side once Harrison Wells shows his true colors. I hate to pull out this old cliché, but I wouldn't want Barry and Caitlin to complicate what they have together. They could be like work spouses. There has been a rise on television of platonic male and female pairings and I'm supportive of that. It more resembles the world we live in.

Plus, don't forget that Caitlin Snow becomes a villainess in the Flash comics. A romantic entanglement between Barry and "Killer Frost" would not end well.

Not only does Barry have both Iris and Felicity on his mind, but Caitlin is still hung up on Ronnie Raymond, her fiancé. Caitlin believes Ronnie to be dead, which we know is not entirely true. Sure, Cisco makes the observation that Barry has the same effect on her as her old flame. That's enough to launch a thousand gifsets and mixtapes. However, once Ronnie does return, the pair will be unstoppable. I don't think Barry could or would even want to get in between such a dynamic couple.

In conclusion, if you want to send fan fiction my way, please feel free to do so! I'll totally read it. I like these two characters and I think they could be sweet together. However, I don't think that this couple will be endgame on The Flash.