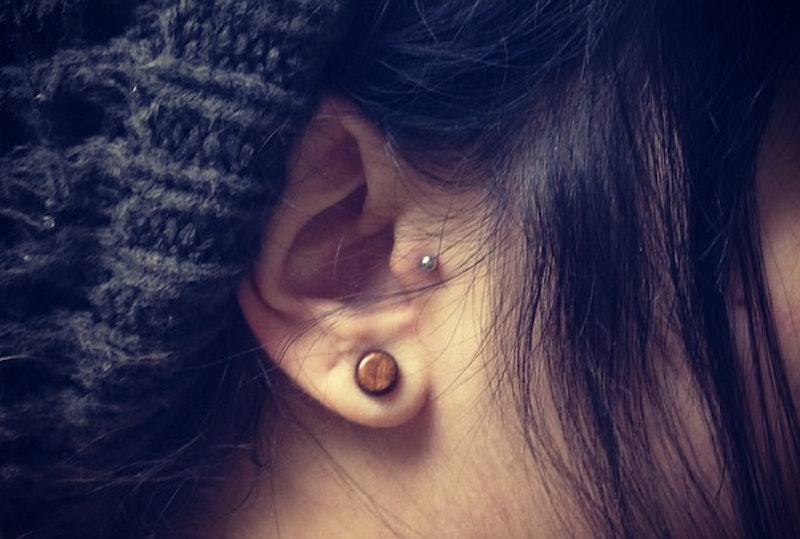 Piercings are having a moment and not just the standard earlobe or cartilage piercing, either. Septum piercings, most which are faux, have been adorning the noses of celebs from Rihanna to Jessica Biel to Jordin Sparks as of late. But you don't have to move to other parts of the body to have non-boring piercing — you can always have fun with your cartilage. One super easy and not-very-painful ear region piercing is the tragus piercing.

The tragus is that little triangle shaped bit of cartilage connected to your face that helps collect sound from behind you. It also looks really cool with all sorts of jewelry in it. It's truly a versatile piercing, and completely unobstructive. I have both of my traguses (tragii?) pierced and I pretty much forget that I have them unless I'm looking in a mirror. Unlike other cartilage piercings, they aren't easily irritated by things like brushing, blow-drying, and wearing headphones.

You can see my tragus (and my rook, but more on that another time) piercing in the photo below. I've had 'em for at least five to six years. From what I recall, they healed quickly and were not "angry" even when I had to wear a headset at work. As a publicist who was always on the phone at the time, I had to be hands-free, but still, the piercings healed flawlessly and survived due to my diligence with care.

This is all the key info you need to know about a tragus piercing.

2. What's The Pain Level Compared To Other Piercings?

Well, it's true that any piercing of the the skin or the body will sting to varying degrees based on location and the concentration of nerve endings. But the tragus registers low on the pain-o-meter, especially when pierced properly by a professional in a parlor. Do NOT try this at home — ever — and definitely have the piercer use a needle instead of a gun.

3. What's The Risk For Hearing Damage?

It's outside of the canal, so it's not exceedingly worrisome. Of course any type of piercing should be done carefully and professionally so as not to damage the body part.

4. How Should I Care For It While It Heals?

The aftercare is low maintenance, like that of a regular ol' lobe or cartilage piercing. You wash your hands, clean with solution, twist the jewelry, and leave it in until the healing process is complete. That's usually four to six months, depending on the person. Just watch the piercing to make sure it doesn't get infected. Signs of such are typically obvious and pretty gross, like redness, swelling, discharge, a stench and, well, pain.

5. Can Everyone Get A Tragus Piercing?

If your tragus is small, you might not be a viable candidate for this piercing. It may be too tiny to pierce without creating a risk for ripping. In that case, just go with a rook piercing instead as a consolation prize.

6. What Type Of Earring Is Best For The Tragus?

A ball closure ring, like the one I have, is fairly common. Curved barbells are also popular, but they are recommended for after the piercing has healed, since their shape is too complicated for the initial piercing process, while simple studs are also used. It really depends on your personal preference — the tragus can handle almost anything.