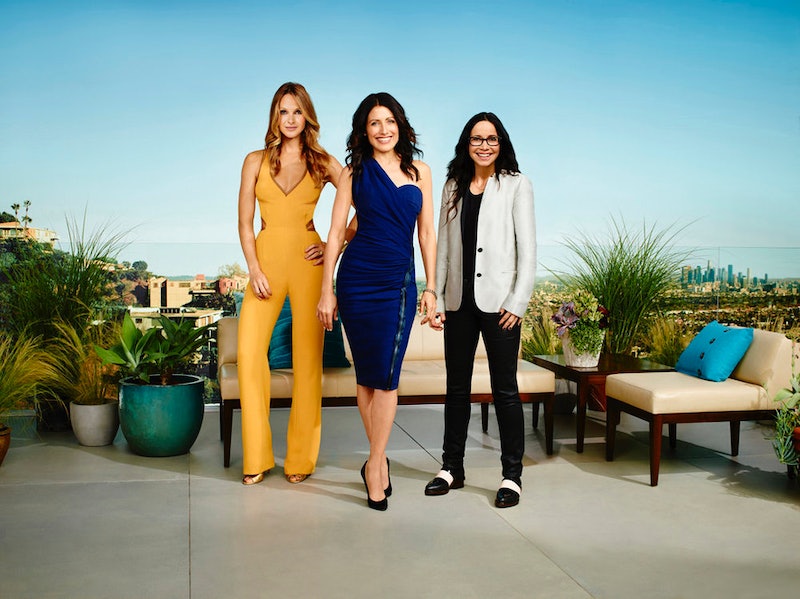 Let's get this straight off the top: Girlfriends' Guide to Divorce is not exactly based on a book... it's more based off a series of books. The Girlfriends' Guide series is written by Vicki Iovine; its seven books (and counting) have guided women through pregnancy, the first year of motherhood, toddlers, and so on. Iovine focuses on cultivating and raising a family without going crazy. But no divorce — at least not in print.

In fact, the TV show itself is more like the next installment of the Girlfriends book series. The last book, The Girlfriends' Guide to Parties and Playdates was published in 2003, but it seems the mothers that have been growing with these books since The Girlfriends' Guide to Pregnancy was first published in 1995 have hit a more complicated time in their lives. In the books, Iovine is the girlfriend who does the titular guiding, which seems like it would adapt well to your average Bravo reality series. Think Millionaire Matchmaker, but reverse the action and — I have to assume — subtract most of the yelling.

But the Girlfriends TV series, Bravo's first foray into scripted television, is less first-person: more like a story about what comes after the books, and after the kids. Girlfriends' Guide to Divorce seems like the story Iovine hasn't gotten around to writing down yet.

After having four children in six years with then husband and music mogul Jimmy Iovine, Vicki decided to start writing about her experiences. The Girlfriends' Guide series was born from feeling like pregnant women and mothers got most of their information from books, but some of the most important knowledge that comes from the likes of girlfriends and mothers, wasn't in any of those books.

Though she didn't write a book about it, and hasn't explicitly said that the Bravo series is based on her life, it's worth noting that Vicki and Jimmy divorced in 2009. And with most of Vicki's books being published 10 or more years ago, it's likely that many of her readers have gone though similar situations. Cue Bravo...

Girlfriends' Guide to Divorce's main character is named Abby (Lisa Edelstein), a — get this — best-selling self-help author/guru in the middle of navigating a divorce. After falling apart at a book signing and admitting that her seemingly perfect marriage is in fact headed to splitsville, the once great helper has to depend on the ones she used to try to help. Thank goodness for girlfriends.

More like this
5 Gripping Books To Read From Women’s Prize For Fiction Winner Ruth Ozeki
By El Hunt
16 Novels That Paint A Realistic Portrait Of Abortion
By K.W. Colyard
What Song Does Eddie Play in 'Stranger Things'? Metallica’s “Master Of Puppets” Ignites The Season 4 Finale
By Alyssa Lapid
Florence Pugh & Zoe Kazan Have Teamed Up For A Major New Netflix Series
By Rachel Mantock
Get Even More From Bustle — Sign Up For The Newsletter