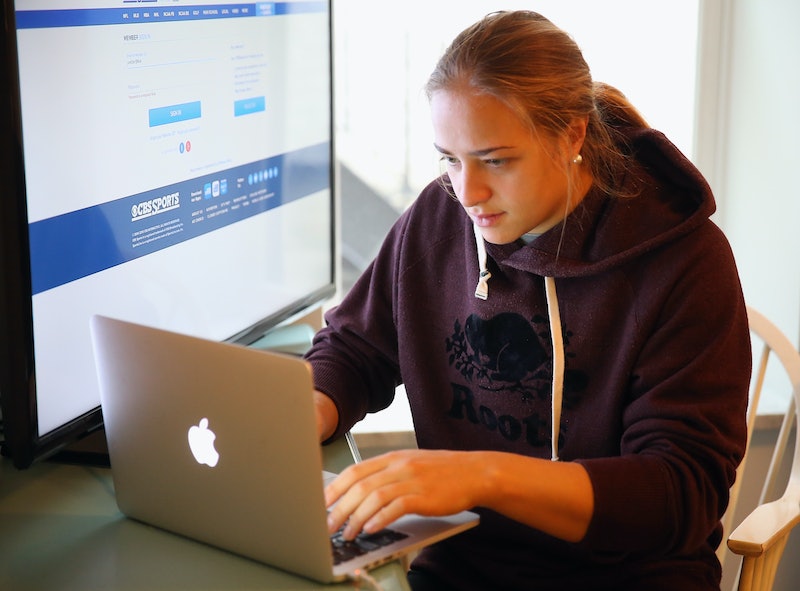 If you feel like Andi from The Devil Wears Prada because you're always glued to your phone reading emails from your boss, you need to back away from the Gmail — because science says constantly checking your work email is bad for your health. Workplace telepressure — in layman’s terms, that nagging urge to respond to work emails ASAP — can cause you to burn out both physically and mentally, according to a new study that will soon be published in the Journal of Occupational Health Psychology.

300 participants were asked how often they respond to emails on work days, vacation days, sick days, and during time off, and then were asked various questions about their well-being and workplace environment. Not that surprisingly, people who answered emails at all hours tended to agree with statements like, “I have no energy for going to work in the morning,” and felt tired and unfocused. People who experienced high levels of telepressure were also more likely to sleep poorly and miss work.

Workplace telepressure doesn't just affect people with Miranda Priestly-esque bosses, though. A 2013 survey found that 81 percent of workers check their email outside of the office, and a third of them said they try to respond within 15 minutes. Meaning, almost everybody is too plugged in, too much of the time, and it can have nasty consequences.

Since the findings suggest it’s not healthy or productive to require employees to be constantly within email’s reach, you might want to send this over to your boss with the subject line “Wink wink, nudge nudge." After all, if the employees are healthy, focused, and on their game, everybody gets more work done, which helps the company do better. Don't you love win-win scenarios?

And if you think workplace telepressure is the only way your job is killing you (literally, not just killing your soul), think again. Here are a few more office perils to watch out for while you’re at it.

1. Sitting on your butt all day

Several studies have shown that sitting for a majority of your day increases your risk of developing obesity, diabetes, cancer, heart disease, and other super fun illnesses. And that’s on top of the aches and pains you might get from resting your behind in that wobbly old office chair. Sadly, even if you go for a run in the morning or are a gym rat, that might not be enough. Take the stairs over the elevator, walk over to talk to your colleagues instead of shooting off an email (gasp!), and try to go for a walk when you go home. Or, you could convince your boss to purchase standing desks for the entire office. Either way.

2. Being around sick people

Do you have a coworker who’s always at work even if they’re sick, insisting, “No guys, I’m fine. It’s just a little fever. I’m OK. Really”? Are you that coworker? You’re not alone. A study conducted by the National Science Foundation found that 26 percent of people go to work when they’re sick, and 34 percent wait until they feel the full effect of their symptoms until they decide to stay home. Meaning, in addition to all that bacteria in the office (over 500 types — ew), you’re probably hanging around people who are either sick and they know it, or sick and they don’t know it. I still can’t decide which one is worse.

3. Staring at a screen for hours

By Thursday, it gets tough to stare at my computer screen all day and my eyes start to fight with me. According to research, I'm not the only one; Computer Vision Syndrome is a real thing and it’s caused by — you guessed it — looking at a computer screen for too long. It can lead to eye strain, headaches, blurred vision, dry eyes, and neck and shoulder pain, but the not-so-bad news is these symptoms usually go away when you take your eyes off the screen. Doctors say it’s important to give your eyes a break, 15 minutes for every two hours of continuous computer use—maybe take a walk and kill two birds with one stone? Also, after every 20 minutes, go ahead and stare off into space for 20-30 seconds to let your eyes refocus.

I think that’s enough of a depressing work break for one day. But hey, at least you're getting paid?