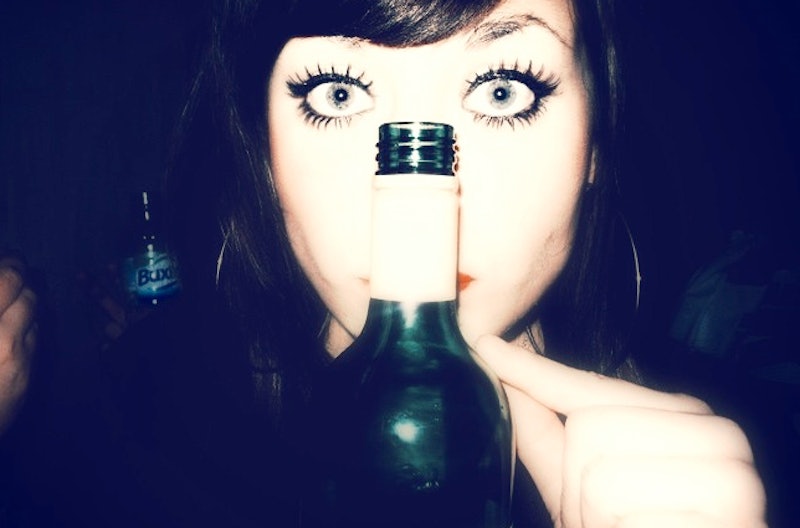 Deciding to open a bottle of wine when you're alone is a process. The problem is that a bottle is too much to drink alone, but you don't want to only have one glass and let the rest go bad. But wine is the perfect drink to have alone; whipping yourself up a vodka cocktail on a night in while watching Netflix by yourself seems like part of your distant future, maybe one you're not ready to succumb to just yet. Wine is sophisticated. It says, "I'm not drinking to get drunk because I am an adult and I willfully enjoy the taste of this beverage!" Vodka tells the uncomfortable truth, which is, "Please can I be drunk now?" and it's fine that we're not ready to accept that part of being an adult means occasionally reverting to drinking like we're in college again.

Speaking of being excessively drunk, that's exactly what you will be if you drink a whole bottle of wine alone in one sitting. Which is why deciding to open the wine in the first place involves so much back and forth in your own head—You WANT the wine, but you don't necessarily want ALL the wine. Wine bottles are proof that the world is out to destroy single people, because half a bottle of wine is the PERFECT amount of wine for an individual, ergo a full bottle of wine is designed for enjoyment by a couple of people. I mean, you could go next door and invite the 80-year-old Puerto Rican man who always tells you to stop smoking because you're going to die from it over for a tipple, but you're not really sure what you'd talk about. It's like your own personal Hamlet: to open the wine alone or not to open the wine alone? That is the question.

As soon as the thought to open a bottle of wine alone enters your head, you will immediately erect a mental wall. "It's a nice thought," you'll tell yourself, "but it's not happening." Your mental wall will move dexterously to rebuff the ball of suggestion trying to break through, but what you don't know is that every time your brain knocks that ball away, it's actually slowly chipping away at your barrier of resistance.

What wine? There's no wine here.

After unsuccessfully trying to resist and deny your hankering for a glass of pinot, you'll begin contemplating what it would be like if you DID open the wine. You could dim the lights and put settle in for a Friends marathon. Maybe cover yourself in a blanket. And eat some dark chocolate. It's starting to sound rather nice, actually...

...Which is when you start negotiating with yourself. You can have two glasses. You can use the rest of the wine to cook with later in the week. It's fine. That's fine. Two glasses is nothing! And if you make a bolognese on Friday, the rest wont go to waste!

But it's all for naught, because you know yourself, and you know that if you're opening that wine, you're drinking the whole bottle and you're not even going to flinch while doing it. So you reject the whole idea and make a cup of tea instead.

As you drink your tea, the thought of wine will obviously creep back into your mind, and I use "creep" loosely because obviously the thought never left your head in the first place. You PROMISE yourself you'll only have two glasses, maybe three if you're not too buzzed after two, but you'll definitely try and limit it to two. Or three, max. You promise. You pinky swear yourself.

...You drink three glasses of wine in under an hour. Which is your maximum, obviously. But you've still got at least two more hours of Friends watching to go...

...So you tell yourself that you can have four glasses of wine if the fourth one is tiny. Just a tipple. You promise yourself you'll only pour in a splash. Just a little splash, it's nothing. Then no more. You SWEAR on everything you hold dear.

Somehow all the wine is gone and you feel like jogging through the rain while crying because you have no self-control and you're so ashamed of yourself, disappointed at having broken all those promises. It's not like you're an alcoholic (you only ever do this sort of thing very rarely, like maybe once a week), but you do feel a distinct sense of failure at having continued to drink through the bottle even when you said you'd stop at three glasses plus a mini-fourth splash. I mean, if you can't rely on yourself, who can you rely on?

Who the what now? Your eyes half close as you begin to nod off while sitting, and shame gives way to an inability to stay upright, let alone conscious. You're not drunk so much as you are completely relaxed mentally and physically, and this nice blanket you threw over yourself is only serving to make this experience all the more enjoyable. You're back in the safety of the wine womb and everything is warm and lovely and suspended without gravity.

Finally you will feel happy, because that's the point of wine. The lead-up to drinking it alone might be stressful and riddled with anxiety, but once you do it, it's not so bad. It's not a habit, but a nice way to spend time with you. I mean, people drinking full bottles of wine socially don't they? And who better to sometimes socialize with than with yourself?