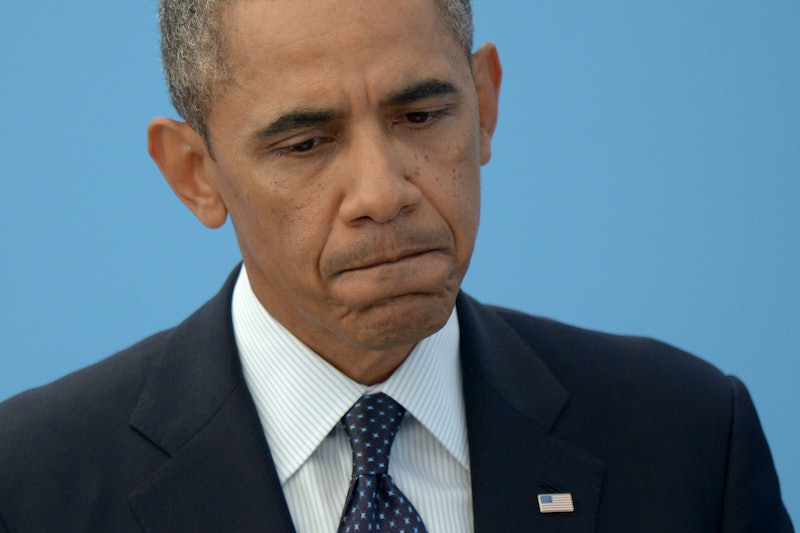 It’s the five-year anniversary of the Lehman Brothers’ collapse this week, and in an effort to bolster his public image, President Obama’s taking a few days to focus on the economy and highlight signs of economic recovery. Any. Signs.

The White House declared Monday the start of Economy Week (following the rather stressful Syria Month), with lots of speeches and rubbings of elbows with CEOs and Kansas City Ford plant employees alike. Pomp and circumstance aside, however, the question remains: To what extent has the economy actually recovered?

People are pretty much convinced it hasn’t — at least not fully. According to a Pew Research Center poll released July 23, 82 percent of Americans say economic conditions are “fair” or “poor,” and 44 percent of people say despondently that recovery is a long way off.

A new study released September 12 reveals that two-thirds of Americans feel like the economic system isn’t any more secure than it was pre-crash. Half feel like household incomes and the “job situation” have “hardly recovered at all.” Any gains are believed to be in the stock and real estate markets. Inflation is also a big concern for Americans, with 82 percent seeing it as a “very” or “moderately” big concern.

So that’s grim. But grimmer still for Obama is that great majorities feel like government policies haven’t done much to fix things: Policies are seen to have favored the economy’s big players (financial institutions, large corporations and the wealthy) at the expense of the poor, middle class, and small businesses. And no matter how you split it, the country’s divided on whether the government’s done too much to try to fix things and made it harder for the economy to grow (43 percent think so) or whether it’s not done enough and left people vulnerable again (49 percent).

Unemployment is at 7.3 percent right now, which is pretty high — but better than it once was. That said, as a measurement tool, unemployment is like the BMI of economics: great for a cursory evaluation of health, but ignoring key variables.

It’s more accurate to look at the employment to population ratio, as an excellent Washington Post analysis did. Turns out that number plummeted from 64.4 percent in January 2001 to hit recession bottom at around 58.4 percent by the end of 2010. Today it’s at 58.6 percent. Not to mention, those banks that were saved because they were “too big to fail” are now bigger than they ever were, and the execution of Obama’s lending and high-finance law is way behind schedule.

But back to the people: a handy infographic created by the Treasury Department also shows that net household worth has risen. But a Pew study shows that recovery has indeed favored the stock market and the wealthy — in particular wealthy people who own stocks. Wealth is already disproportionately distributed, and the households that have more now... are the ones who had more before. For average workers, median household income has dropped from about $54,000 to $50,000 a year.

It’s no surprise then that foreclosures remain way above pre-collapse stats.

The good news is that inflation isn’t as high as perceived: The Consumer Price Index only went up .2 percent in July (August’s will be released today), against the cumulative annual rate of two percent. Also, the Troubled Asset Relief Program (TARP), a way for the government to get money back into the banking system, bail out automakers, and rescue homeowners, seems to have worked for cars — auto manufacturing jobs have increased.

To help us limp along a little more smoothly, Obama wants to reverse some spending cuts that kicked in during March, but he’s loathe to negotiate with the elephant in the room: the Republican unwillingness to raise the debt ceiling. Using the threat of default to negotiate policy, he says, “changes the constitutional structure of this government entirely” (Section 4 of the 14th Amendment if you want to look it up).

So the short answer to the question of how our economy is doing? Obama has his PR work cut out for him.