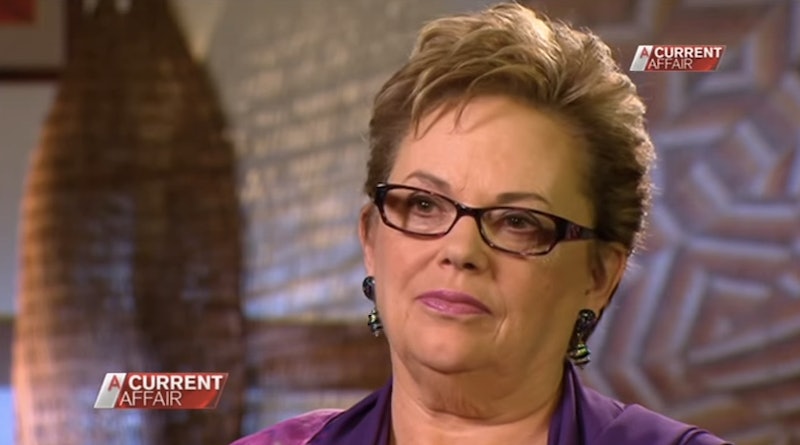 More than three decades ago, Australia was rocked by the bizarre case of 9-week-old Azaria Chamberlain's death. According to her mother, Lindy Chamberlain, dingos were to blame for the tragedy, but prosecutors advanced a different story — it was Linda, not wild animals, who had killed the child. While the story was immortalized in American pop culture by way of Meryl Streep's flawless performance in A Cry in the Dark and was later turned into a joke by shows like Seinfeld and The Simpsons, the Chamberlains have lived an ongoing nightmare since August 17, 1980.

Baby Azaria's death was a nearly inexplicable situation. Her body was never found, and the only evidence ever recovered was the jumpsuit she'd worn at the time of her death, with bloodstains around the neck. There was no motive for Chamberlain, who was described as "a respected member of the community" and the wife of a Seventh-Day Adventist pastor, to commit such a heinous crime. And yet, both she and her husband were ultimately convicted for the murder of their baby, and Lindy subsequently spent three years in prison for a crime she did not commit.

Though she was later released, it took another 32 years to fully exonerate Lindy from her daughter's death, when an official death certificate was finally amended to reflect a coroner's report that Azaria died as a result of a dingo attack.

Back up, what's this story?

On August 16, 1980, Lindy and Michael Chamberlain arrived in Uluru, Australia, with their young family of two boys and baby girl Azaria. The area was known to be inhabited by dingos, wild dogs with a reputation for violence. On the night of August 17, 1980, 6-year-old Aidan Chamberlain heard his mother utter the horrible cry, "A dingo's got my baby!" a claim that came under intense scrutiny in the years following the tragedy. Azaria was reported missing and the case set off a widespread search for the baby. The ultimate discovery of her soiled clothing seemed to support the Chamberlains' story that a dingo had made off with their child, but later inquests challenged this initial assertion.

How did it go from dingo attack to murder?

This is a question that the family has likely asked itself for years. Following Azaria's death, the Chamberlains were perceived as too calm, too dispassionate to be uninvolved in her death, and besides, could dingos really take the fall for the death of a 2-month-old child? Police garnered testimony from forensic experts like James Cameron of the U.K., and Australian forensic biologist Joy Kuhl, who gave the courts reason to believe that the Chamberlains were not as innocent as initially surmised.

After a second inquest, it was determined that evidence like "infant blood...in the Chamberlains' car, in a camera bag in the car, on a pair of scissors, and elsewhere," as well as "the bloodied handprint of a small adult on Azaria's jumpsuit" suggested that Lindy Chamberlain had cut her own daughter's throat, then staged the entire dingo scenario as an elaborate cover-up.

Following a controversial conviction, yet another inquest found that there was no blood in the car, and that much of the so-called proof used to imprison the Chamberlains was circumstantial and unreliable, and Lindy and Michael were fully exonerated, compensated and pardoned in 1987. But still, the damage had been done.

How did the story get so twisted?

You can thank the media for that one. As the New York Times pointed out in a recent article on the case, the Chamberlains' fate was sealed by the cameras more than the courts. The Seventh-Day Adventist church, a relatively unknown denomination, was demonized into a child-sacrificing cult, and it was rumored that Azaria in Hebrew meant “sacrifice in the wilderness.” In reality, the word means "God helped." The public was also dissatisfied by the reactions of the parents — as the Times noted,

Michael seemed overly diffident and Lindy too eager to play for the cameras. Her “sultry good looks,” as one writer put it, arched many an eyebrow as did her wardrobe in public appearances; it tended toward sleeveless dresses held in place by thin shoulder straps.

Journalists also begrudged Lindy's seemingly cold attitude toward the entire ordeal, and considered her approach nearly "clinical" in its detachment. Australian public opinion was weighed heavily against the Chamberlains, and even today, there are those who doubt her innocence.

How were they finally cleared?

After decades of waiting around for what everyone knew, in 2012, coroner Elizabeth Morris delivered the long-awaited ruling that showed a dingo attack as the cause of death of 9-week-old Azaria. At the time, Lindy Chamberlain said,

No longer will Australians be able to say dingoes are not dangerous and will only attack if provoked. We love this beautiful country but it is dangerous and we would ask all Australians to be aware of this and take appropriate steps and not wait for someone else to do it for them.

Where is Lindy now?

Lindy Chamberlain has since divorced and remarried, and the 62-year-old is now the wife of American John "Rick" Creighton. According to an interview with Yahoo Australia, "she admits there are still times she wants to give some people 'a good smack' remembering the traumatic and stressful lost years she spent fighting in court to prove her innocence." Ultimately, Lindy says, her goal is to just move on.

It's the dark patches in your life and the heavy patches that you build the happiness and life's lessons on. What you are doing by stewing over something that somebody has done wrong is renting them a room in your head and that is the most private space we have.

Where is Michael now?

Azaria's father has also remarried, and has written three books, Beyond Azaria: Black Light White Light, Cooranbong, First Town in Lake Macquarie 1826-1996, and Beyond Ellen White: Seventh-Day Adventism in Transition. He also took on a brief stint in politics before turning to teaching in the early 2000s. He has since retired.