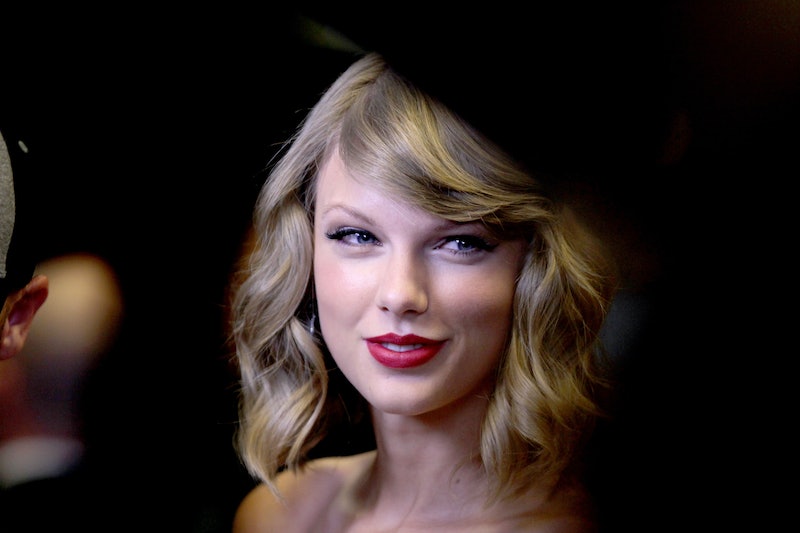 I assume that Taylor Swift's meteoric rise to mainstream popularity must be too boring for some people. I'm not saying that she wasn't popular before, but it seemed like, if you weren't already a fan, then hating on Swift was almost as popular as making cracks about Justin Bieber. Basically, Swift fans had to put up with a lot from people who just didn't know what not to say to a Swiftie. Now there's a new rumor about the pop star that was published in the Daily News, one that seems almost laughable considering Swift's new image. Apparently, Swift got a Victoria's Secret model fired from the 2014 fashion show, and it's all because of a cutting comment the model made in 2013.

Of course, that might not seem all that unusual to those of you who might want to point out that there are at least three songs on Swift's 1989 album that were written about Harry Styles — a boy she hasn't dated in a year. However, everything else about the story just seems a little hard to believe. According to the report, model Jessica Hart insulted Swift's performance at the Victoria's Secret Fashion Show in 2013, saying, "God bless her heart. I think she's great. But I don't know, to me, she didn't fit. I don't know if I should say that."

In response, Swift allegedly asked for Hart to be cut from the 2014 fashion show — and, indeed, the model didn't walk the runaway with everyone else on Tuesday. Victoria's Secret Chief Marketing Officer Ed Razek has already spoken out to assure people that Hart still works for the company, but does working for the company mean much when a petty ol' pop star got you blocked from the biggest event of the Victoria's Secret calendar year? Good thing this story probably didn't happen. Even if you acknowledge that Swift has been petty in the past and even if you acknowledge that Hart did diss Swift's performance last year, is there really anyone that believes the new, more mature Swift is the kind of person who would get a model fired for year-old comments that she already apologized for?

If you're still doubting Swift, then look no further than her best friendship with Lorde. Before Lorde and Swift ever met, the 18-year-old singer was insulting Swift for giving her fans an unrealistic expectation of what people are expected to look like. However, not only did Lorde and Swift meet and bond anyway, but Lorde revealed that Swift didn't even know that Lorde had said anything bad about her at all. Hart's comment was about Swift's performance, not about her personally — unlike Lorde's. I don't see why Swift would be angrier about that than about being called a bad influence to the fans she loves so much.

In light of that, whatever reason Hart had for not walking the runway this year likely had absolutely zero to do with Swift. If we really need something more interesting to talk about than the pop star's implied "Bad Blood" feud with Katy Perry, how about we talk about the amazing fashions she displayed at the show on Tuesday? Or, better yet, how about we talk about her debut performance of "Style," which is another 1989 song that we all know is about ex-boyfriend Styles?