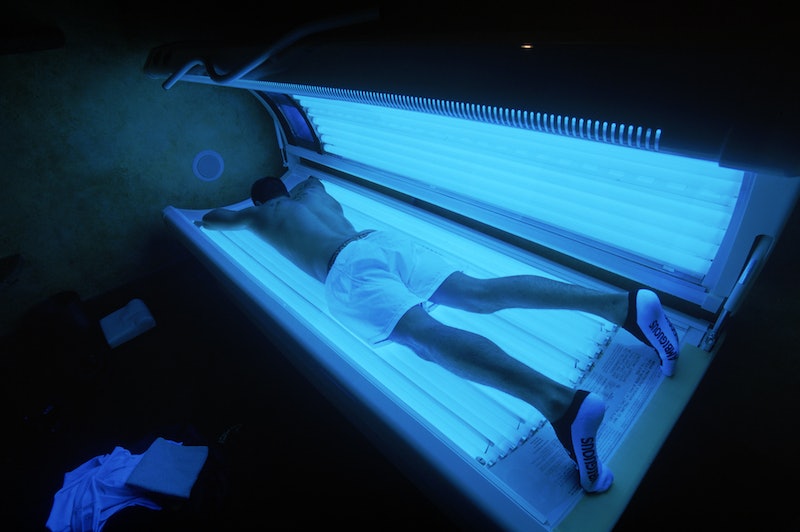 Reverse tanning is a trend that has gained serious steam in South Korea. It could catch on here in the U.S., too... but it's not what you think. Reverse tanning doesn't make your skin lighter, nor does somehow magically reverse the negative health effects of lying out in the sun for too long. Oh, and it's powered by NASA technology. So what the heck is "reverse tanning" and, more importantly, what isn’t it? Let's debunk some of the myths surrounding the misnaming, courtesy of Joyce Kong at Refinery29's analysis.

One would assume that the reverse or the opposite of tanning, which is darkening of skin, would be the lightening of skin, right? Not so, my friends: Reverse tanning is actually the process of evening out your skin tone.

Refinery 29's utterly fascinating and in-depth report breaks the process down on multiple levels and the writer even participated in a session. The analysis notes that skin color is of cultural and social significance in Korea, since dark skin was once a sign of the working class, which spent time laboring in the sun. Culturally, fairer skin has long been preferred for a variety of reasons and the report suggests that the popularity of the procedure is also related to how women value skincare and how they spend time and money pampering skin. Of course, this also treads into the controversial territory of skin whitening, which perpetuates the generally ridiculous idea that lighter skin is somehow more beautiful.

Still, this is more about evening out your skintone than making it a few shades lighter — something anyone who's suffered from red splotches has probably considered. Here are the six key things the report reveals about reverse tanning.

Those are the other names for the process, even though there is no tanning happening.

Those tanning beds you and I know and that are fairly common in America use UV lights to increase the production of melanin. "White tanning" employs infrared light. Infrared light is already being used in U.S. salons and spas, but it was formulated for the face, not the entire body.

As stated, there is no lightening of skin. Instead, it's said to improve and even out your skin's tone.

NASA is concerned with skincare? Yes, actually. This technology was devised as a means to treat a wound sustained in space so the body could self-heal via the infrared light and collagen and elastin production. The byproduct is the evening of skin tone.

5. What Happens During A Session?

Ready to get schooled? A session is 20 minutes long. Five seshes while naked in "a coffin-like container" (sounds spooky, but that's pretty similar to a tanning bed) are needed to stimulate production of collagen and elastin. At least ten sessions are necessary for you to see results. It's not painful, just time consuming.

6. And Really, What Are The Results?

Well, according to Refinery29's report, Korean beauty bloggers swear by it, claiming that in addition to a more even skin tone, acne was eradicated and lines and wrinkles lessened. However, the process doesn't fix UV radiation damage.

And there you have it. Perhaps it's best to refer to this process as Skin Tone Improving Therapy, Powered by Nasa. Sure, it's long, but it's more accurate, no? And really, there is nothing wrong with women seeking to improve and even out their skin tone. Beauty conscious women the world over spend lots of money on lotions, creams, and procedures to do so and this trend appears to be another method, albeit a misnamed one.

For the rest of Kong's report, plus her firsthand experience with the procedure, head over to Refinery29.