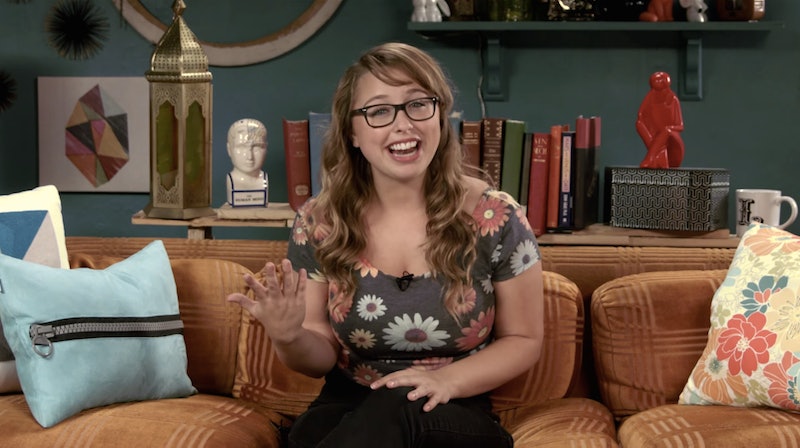 Laci Green might not be a household name, but those who spend a lot of time on YouTube might recognize the 25-year-old starlet. She is well-known out there, and on this very website, for her videos that got in on the subjects of feminism and sexuality, such as "She Asked for It" and "10 Tips for Hook Ups!" Most recently, Green has become the host of MTV Braless, a YouTube channel devoted to a web series that examines pop culture, politics, feminism, and everything in between. If you find that name a bit of an eyebrow raiser, know that it was originally called Boobs. "I chose the name Braless," Green revealed. "It's supposed to be harkening back to Second Wave Feminist bra burning and what you think of as old-school feminism. This is kind of taking it back and bringing it into the Third Wave, bringing it into the 21st century, and giving a new take on it."

As you can tell from that quote alone, Green's interest in feminism isn't just confined to a few Beyoncé songs and YouTube ranting. The depth of knowledge that Green has about the movement, and the careful way in which she expresses her own ideas and sentiments about it, serve to show that she was the best host that MTV could have picked for a project like this. For example, in the Braless episode "Is Twerking Sexist?", the YouTube star introduces the difference between a woman as a sexual object and a woman as a sexual subject. When asked to explain, she gave us this little gem.

When it comes to women being sexual anywhere, in the media, in their lives, there are a lot of double standards that they're up against... When it comes to being a sexual subject versus a sexual object, we're really talking about who you're being sexual for. It's shifting it from "I feel pressured to be like this or to do that or not do that because of everyone else" to "I'm going to do what I want because that's what I want, that's what makes me happy." So a sexual object is performing for other people exclusively... But the sexual subject is what I argue that Beyoncé and Nicki Minaj are even though their videos were really sexually charged, because they're calling the shots and they're the ones that are deciding how they want to be portrayed.

However, the discussion of a woman as a sexual object versus a sexual subject isn't the only time Green broke down feminism in an awesome way during the interview. In fact, here are eight other quotes about feminism from the YouTube star that prove she's not only the best person MTV could have chosen to host a show like Braless, but that also prove she's a budding feminist icon that's certainly worth listening to.

On Women Who Claim They Aren't Feminists:

"When we're talking about people who are like, 'I'm not a feminist' — they're really distancing themselves from a stereotype of feminism about hating men and about being angry all the time. It's about equality and not about one gender over another. It's not about tipping the scales in another direction, it's about evening them out."

On Accepting the Word Feminism:

"I was grappling with the term equalist and humanist and thinking of different terms to describe the same exact philosophy. I think, for me, it was a process of realizing that by distancing myself from the history of the movement 1) I was inaccurately representing what feminism was by buying into the stereotypes, and also, I'm distancing myself from all the women before me who made it possible for me to even be where we're at today."

On Why The Word Feminism Is So Important:

"The word fem, something with fem in it, feminism in itself is super powerful because it challenges this idea that women are the other. It's putting women in a central position and giving them more power where they haven't had power in the past."

"I'm generally averse to calling people 'bad feminist,' 'good feminist,' and getting into this place where we're making all these judgments of people. I really want people to feel like they can make mistakes and they can have their own version of gender equality in their head and be free and independent about it."

"That said, there are ineffective feminists, people who are a little bit misguided about what their actions will bring about... Feminism is a process."

On the Future of the Movement:

"We all have the goal of gender equality in mind. We all want to get there, but how we get there, there's a lot of different ideas about what that means. This is a historical problem."

"I think my feminism jacket would look just like the jacket that I wear every day. My life is feminism. It's not a special jacket that I put on. It's something that is integral to every decision and thought. It informs everything and it proves everything as well. So it would probably be a very unassuming, plain, didn't-really-realize-it-was-my-feminism-jacket type of jacket."

More like this
Twitter Is Identifying With Sally Field & Jane Fonda’s Friendship In New Viral Video
By Jake Viswanath
You’ve Got 'Love Island’s Farmer Will All Wrong
By Jack Orenstein
Ashton Kutcher Wants Danny Masterson “To Be Found Innocent” In Rape Retrial
By Jake Viswanath
'The Queen’s Gambit' Season 2 Tweet Wasn’t From Anya Taylor-Joy
By Mary Kate McGrath, Jack Irvin and Grace Wehniainen
Get Even More From Bustle — Sign Up For The Newsletter
From hair trends to relationship advice, our daily newsletter has everything you need to sound like a person who’s on TikTok, even if you aren’t.