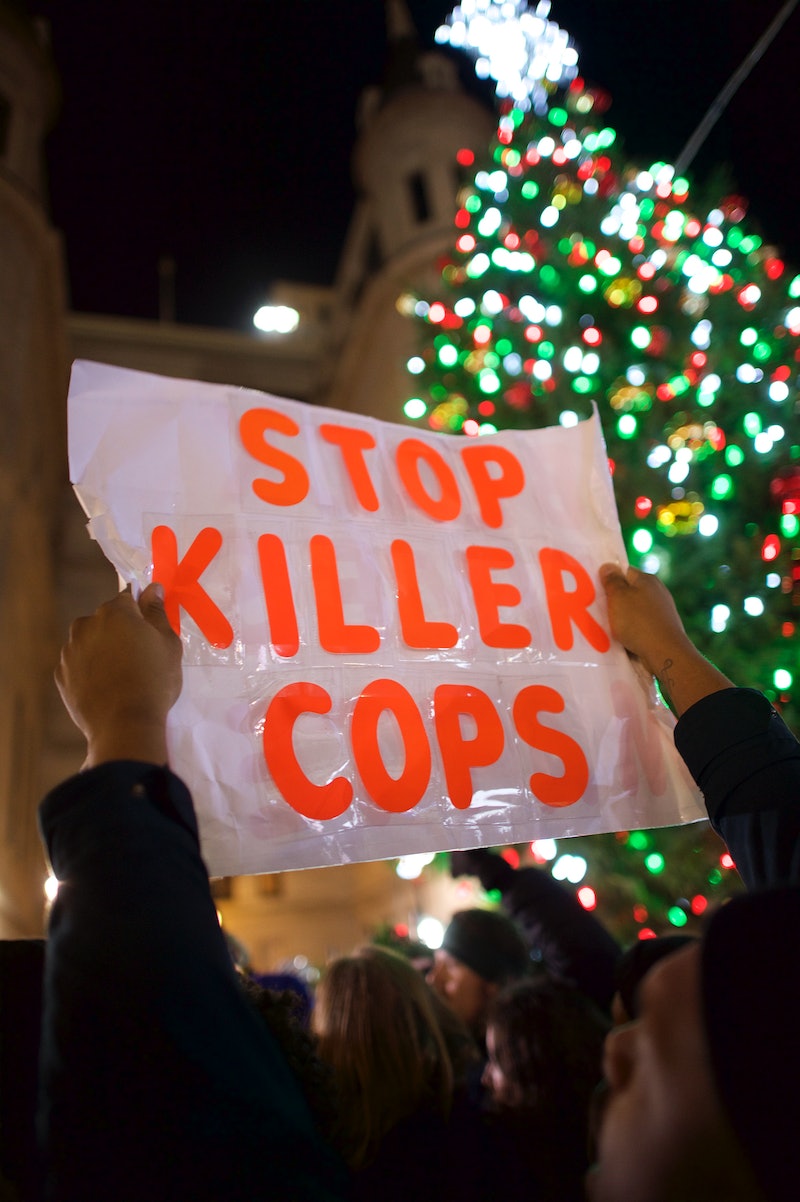 By now you've probably heard, with the news sweeping through social media like a wildfire — months after the videotaped choking death of Eric Garner, at the hands of NYPD police officer Daniel Pantaleo, a Staten Island grand jury has returned a non-indictment. In other words, despite being captured on film choking Garner on the sidewalk while the 350-pound 43-year-old gasped "I can't breathe," Pantaleo won't face criminal charges. It should come as no surprise just how much outrage this has inspired. And in New York City, it's on full display — New York is protesting the Eric Garner Grand Jury verdict with widespread protests, and it's worth your attention.

Coming hot on the heels of the Darren Wilson grand jury announcement in Ferguson last week — also a non-indictment, in spite of the fact that non-indictments by grand juries are mind-blowingly rare — the Garner decision has set off an even bigger groundswell of pain and grief within anti-police violence protests lately. Judging by reactions in mainstream, independent and social media, this seems in part thanks to the apparent, unique-seeming futility of the justice system in the Garner case. After all, if a complete, unedited video of an needlessly fatal encounter isn't enough to bust a cop for wrongful death, what is?

All over the city, protesters have been taking to the streets, with signs, chants, "die-ins" in heavily trafficked public areas, and even an attempt to halt the lighting of the famed Rockefeller Center Christmas tree. In other words, they're doing everything they can to force this issue in front of the eyes and hearts of the American public, and it's a powerful scene.

As New York City Mayor Bill de Blasio said in addressing the decision Wednesday night, the central message of both the Ferguson and Garner protests must be spoken and heard.

While "hands up, don't shoot" has been a hallmark phrase of the Ferguson protests — based on conflicting witness accounts that 18-year-old Michael Brown had surrendered when he was fatally shot by Darren Wilson, accounts the St. Louis grand jury clearly didn't believe — there's not a shred of ambiguity about Garner's death, or what he was doing as he lost his life: repeating "I can't breathe."

Protests aren't limited strictly to New York, of course. If you want to know where people are gathering, Huffington Post has a useful resource to locate protests in your part of the country. After all, this isn't just a New York issue, or a Missouri one, for that matter — it's an American issue, and it deserves to be heard everywhere.