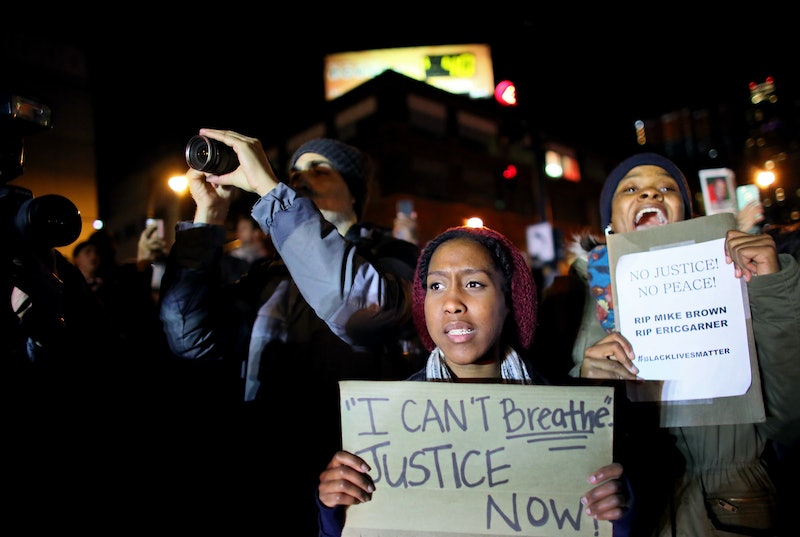 When police officer Daniel Pantaleo placed Eric Garner into a chokehold, wrestling the 43-year-old African-American man to the ground from behind, he didn't mean any harm or injury. While testifying before a Staten Island grand jury, which ultimately chose not to indict the eight-year NYPD veteran, Pantaleo said he heard Garner's pleas for help and tried not to injure the Staten Island father of six, The New York Times reports. However, the officer didn't necessarily believe Garner couldn't breathe, because he was able to speak.

London told The New York Times Pantaleo didn't mean to put Garner in a chokehold. Instead, the police officer tried to use a move he learned during training, which usually tips "the person so they lose their balance and go to the ground":

He wanted to get across to the grand jury that it was never his intention to injure or harm anyone. He was really just describing how he was attempting to arrest someone.

Although Pantaleo reportedly claimed to hear Garner cry, "I can't breathe," 11 times, the police officer held onto Garner, because the fact that he was speaking meant he could still breathe, London said. However, Pantaleo allegedly "attempted to get off as quick as he could," because he knew Garner may be in need of some medical assistance.

I think it was a major factor [in the case]. Only he can explain why he did what he did. Nobody else can know what he was thinking.

The grand jury's controversial decision to not bring criminal charges against Pantaleo, who remains on suspension as internal and federal investigations are pending, sparked citywide protests in New York on Wednesday night. Continuing the Ferguson demonstrations that began last week, protesters disrupted rush hour commuters at Grand Central Station, where they held a "die-in." Later, hundreds convened in Times Square, then marched to the West Side Highway, blocking traffic.

Attorney General Eric Holder has officially launched a federal investigation into Garner's death, and New York City Mayor Bill de Blasio promised on Wednesday in a press conference that the city will cooperate with the investigation.