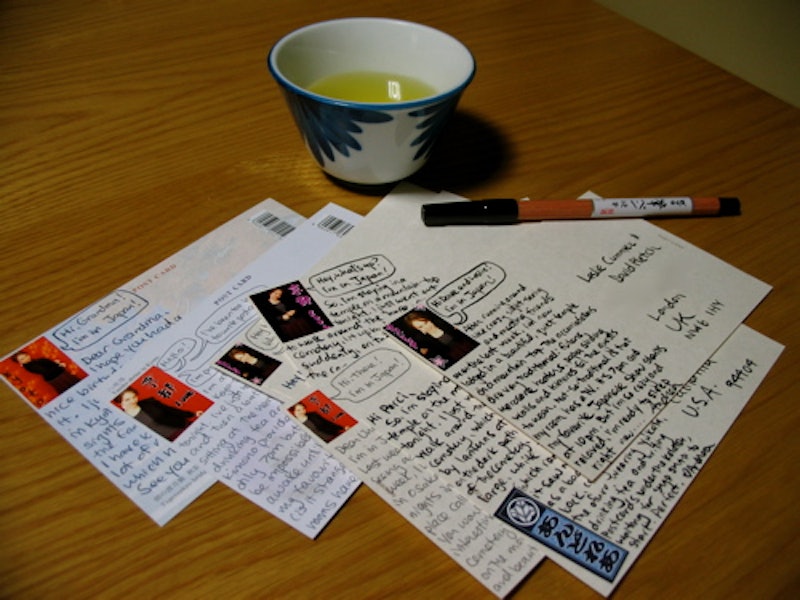 The first time I felt homesick during my semester abroad, I hadn't even left the country yet. My parents had just dropped me off at JFK. They had stayed with me until I entered the security line, and then, with a few hugs and wave goodbye, they were gone. It'd be the last time I saw them again for two months, the longest we'd ever been apart. Suddenly, that notion, so unconcerning a few moments before, felt unfathomable.

The second time it happened, I was shopping in my first Prague supermarket, surrounded by foods I didn't know, brands I couldn't read, and cashiers I couldn't understand, as I was shouted at in rapid Czech. I was alone, confused, and incredibly overwhelmed, hating the unfamiliarity and wondering why I'd possibly thought traveling abroad was ever a good idea.

The third time, I was deeply sick with a virus; feverish, exhausted, and miserable. My friends brought me soup and I stayed home from class, but all I wanted was to be in my own house, with Gilmore Girls on the TV and meds that were in English, and a mom who'd rub my back as I fell asleep. For the first time ever, I hated being abroad. The feeling went away the moment I recovered, but for those 10 days, nothing felt worse than being 4,000 miles away from home.

And there were more moments of homesickness: Thanksgiving, when I Skyped my parents after a disappointing Czech-made meal; my 21st birthday, when messages from home flooded my Facebook; last week, when thousands took to the streets of Boston and New York in protest, and all I could do was read the paper and look at some photos.

I miss live TV, and movies without subtitles. I miss getting new music, and I miss Pandora. I miss Barnes & Noble. I miss Urban Outfitters. I really miss Target.

In between those times, I loved Prague. And I still do — it's a beautiful, incredible city that surprises me every day. In these past three months, I've traveled all over Europe, made many close friends, and have fulfilled every "find yourself" cliche there is about study abroad. But those bouts of homesickness rattled me. I didn't understand how I could be so happy where I was, while still wanting to be somewhere else. If I loved Prague so much, then why did I want to leave?

The only explanation, it seemed, was that I was doing something wrong. I must not have been studying abroad like I was supposed to, because if I was, coming home in December would've seemed like a punishment, not a relief. Was I not immersing myself enough, truly learning the culture and attempting the language? Was I spending too many nights in instead of partying at the bars? Had I simply picked the wrong city, and would feel differently if I'd studied in, say, London or Barcelona?

It didn't help that whenever the topic of coming home was brought up, everyone around me seemed to feel nothing but sadness. "I just can't believe we only have a few weeks left here," they'd sigh, or shake their heads and say, "God, I never want to leave." I felt alone in my mixed feelings; everyone else, it seemed, was clearly, unequivocally happy being away for so long.

Except, of course, they weren't. As often happens when we're busy self-pitying, reality gets distorted. It only took one timid broach of "I'm kind of ready to go home in a few weeks, you know?" for me to realize how wrong I was. Because instead of gasping in horror and deeming me a Bad Study Abroad-er, all my friends ... nodded. They said "me too." They talked about loving Prague but missing home, wanting real beds, and good food, and reunions with pets only seen over Skype. They said pretty much everything I'd been secretly feeling for the past few months without any hesitation, as if it was the most normal thing in the world. Because it was.

Three and a half months is a long time to be away from home, especially when you're young and in a foreign city. Even if you love where you are, it's natural to be ready to leave after so long away. So many people (including me, until recently) seem to believe that if you're homesick, you must be having a miserable time, but it doesn't have to mean that. It can simply mean that three and a half months, no matter how great, is a lot of time to be so far away, and that by the end of it, it makes perfect sense to be ready to go home.

And believe me, I am ready. I miss my parents. I miss my cat. I miss waking up in my own bed, not sharing a bathroom with three other girls, coming downstairs in the morning to orange juice in the fridge ,and The New York Times on the table. I miss bagels — real, New York bagels, not those plastic pieces of bread found in all European cafes. I miss Chinese, Chipotle, sushi, guac, and peanut butter. I miss water that doesn't cost extra, and comes with ice.

I miss live TV, and movies without subtitles. I miss getting new music, and I miss Pandora. I miss Barnes & Noble. I miss Urban Outfitters. I really miss Target.

I miss paved roads (no cobblestones!) and driving around, telling time without having to do math, weekend plans that don't involve seven-hour bus rides, and backpacks stuffed with my belongings. I miss sleeping in without feeling guilty, like I'm wasting my time.

Mostly, I just miss the feeling of home — not being 4,000 miles away from the people and things that I love, separated by six time zones and the Atlantic Ocean. I am so glad I studied abroad, and that I got to have such a remarkable experience. But, by now, I am ready to leave — and, despite what I used to think, that doesn't mean I failed.