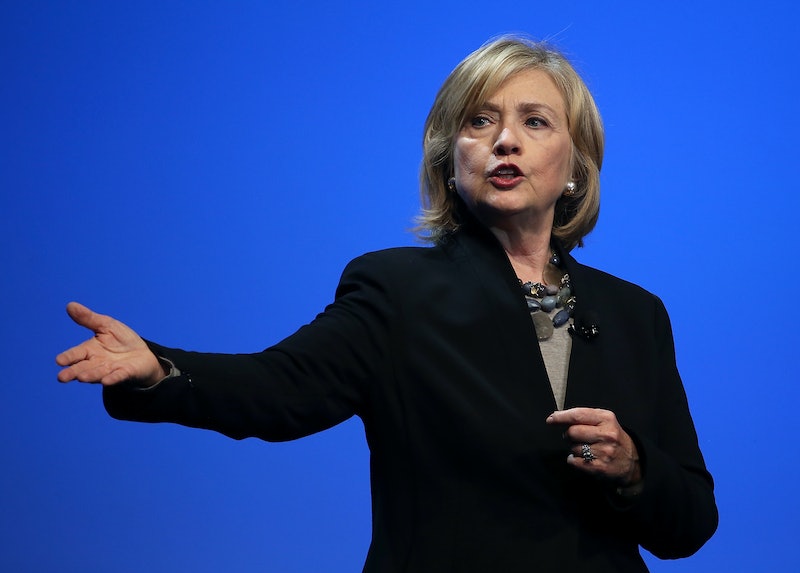 For the last decade, one event has drawn female powerhouses from across a variety of fields to Boston for a single, phenomenal day of learning and sharing about "the issues that matter most to women." And on the 10th anniversary of the Massachusetts Conference for Women, Hillary Clinton delivered the keynote speech in which she addressed the injustices in the American legal system that have become so evident in the last few days with decisions on the Mike Brown and Eric Garner cases in Ferguson and Staten Island.

Clinton, who seems to epitomize the strength and inspiration the annual conference strives to reflect, told a crowd of several thousand women who represent a number of disciplines, "...we have allowed our criminal justice system to get out of balance, and I personally hope that these tragedies give us the opportunity to come together as a nation to find our balance again."

The former Secretary of State's opening statements mark the first time she has spoken publicly about the grand juries' controversial decisions for both men. While the Ferguson decision involving Officer Darren Wilson and unarmed 18-year-old Mike Brown has proven divisive for liberals and conservatives, individuals on both sides of the aisle seemed stunned and horrified by the non-indictment of Officer Daniel Pantaleo, the 29-year-old member of the NYPD who was videotaped placing Eric Garner in a fatal chokehold.

Leon Wolf, who contributes to the conservative blog Redstate, wrote of the ruling, "This decision is really and truly baffling to me, and infuriating besides," and Sean Davis of the Federalist said, "It defies reason. It makes no sense. Just going on the plain language of the law, the police officer who killed Garner certainly appears to be guilty of second-degree manslaughter at the very least." Those these men's politics may seem diametrically opposed to those of Clinton's, who will likely be the Democrats' nominee for the 2016 presidential race, their opinions on the latest shortcomings of the justice system have found common ground.

Clinton applauded the Department of Justice's decision to move forward with federal investigations into both cases. Said the former senator,

I know that a lot of hearts are breaking, and we are asking ourselves, "Aren’t these our sons, aren’t these our brothers?" I’m very pleased that the Department of Justice will be investigating what happened in Ferguson or Staten Island. Those families and those communities and our country deserve a fair and full accounting as well as whatever substantive reforms are necessary to assure quality justice and respect for every citizen.

When it comes to "quality justice and respect," it has become only too clear in the last several days how radically different certain citizens' lives are from others. In keeping with the mission of the Conference for Women to challenge one another to think critically, Clinton also urged audience members to step outside of their comfort zones and their spaces of privilege, and instead attempt a level of compassion that is desperately lacking in today's society. Clinton noted,

More broadly, each of us has to grapple with some hard truths about race and justice in America. Because, despite all the progress we’ve made together, African-Americans — most particularly African-American men — are still more likely to be stopped and searched by police, charged with crimes and sentenced to longer prison terms.

In fact, according to Rep. Spencer Bachus, as of 2013, "The United States imprisons almost three times as many black people than were jailed in South Africa during Apartheid." Indeed, as Clinton pointed out, "a third of all black men face the prospect of prison in their lifetimes," which results in "devastating (consequences)...for their families."

Prison reform, which has long been touted as a necessary area of change, seems to be gathering steam as a hot button issue in the upcoming presidential race, and Clinton made her stance on the matter clear on Thursday. "The United States has less than 5 percent of the world’s population, yet we have almost 25 percent of the world’s total prison population,” Clinton said, and "that is not because Americans are more violent or criminal than other (people) around the world."

In spite of the obvious shortcomings in the current legal and justice systems, Clinton did take time to praise the "decent, honorable, brave police officers out in our communities" who "[inspire] trust and confidence, rather than fear and frustration." By way of "creative and effective" policies that "keep us safe and reduce crime and violence without relying on unnecessary force or excessive incarceration," Clinton said, there is a better way forward.

Ultimately, Clinton left her audience with a powerful message — that empathy absolutely crucial in paving a future that does not repeat the mistakes of the past. Clinton concluded,

The most important thing that each of us can do is to try even harder to see the world through our neighbor’s eyes, to imagine what it is like to walk in their shoes, to share their pain and their hopes and their dreams. These tragedies did not happen in some far away place. They didn’t happen to some other people. These are our streets, our children, our fellow Americans and our grief.

In the words of Michael Brown's father, "We are stronger united."