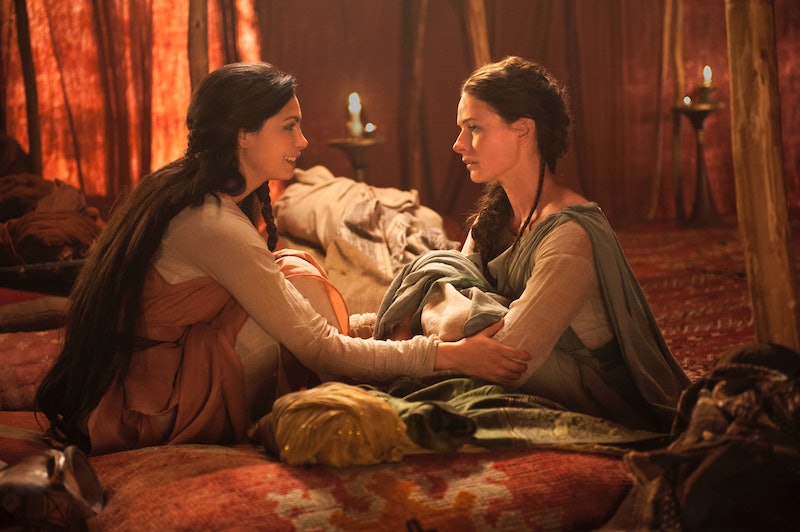 Despite a few recent missteps with biopics, Lifetime has re-entered the land of original programming with their newest two-part miniseries The Red Tent, which premieres on Sunday night. The Red Tent alters and expands on the story of Dinah from the book of Genesis in the Bible. Dinah was the youngest of Jacob's 12 children, and his only daughter, but her role in the Bible was so small that many have forgotten her existence in the text. Lifetime's adaptation of Dinah's story comes not from the Bible, however, but from a best-selling book from author Anita Diamant. The book follows Dinah's life as the only daughter in a large family, her true love story, her family's betrayal, and her subsequent re-inventions, as narrated by Dinah herself. So how does Lifetime's adaptation of The Red Tent compare with the book? Surprisingly enough, the two episodes stay pretty faithful to the source material.

In the book and the film, Dinah begins by explaining that she is recounting her memories and focuses heavily at first on the lives of her mother Leah and her mother's sisters, Rachel, Zilpah, and Bilhah, the last two being slaves bought by her grandfather. All four women ended up marrying Dinah's father, Jacob, but the way in which the marriages take place is the first major storyline that is changed from novel to screen. A few other key changes follow as well, but the tone remains the same.

In the book and the film, Jacob arrives to Leah, Rachel, Zilpah, and Bilhah's home as their cousin looking for work as a shepherd and instantly falls in love with Rachel, rather than the eldest born Leah, who learns to love Jacob as he learns to understand her. When their father finally agrees to Rachel's marriage to Jacob, the stories differ. In the book, it is Zilpah who convinces Rachel to give her wedding veil to Leah to marry Jacob, as Rachel is afraid of the wedding night. She does so, but then later realizes she has been tricked as Leah loves Jacob as well. In payment for the deception, Rachel marries Jacob and Zilpah and Bilhah are offered as bride price (or dowry) as well.

In the film, however, Rachel is still afraid of the wedding night and begs Leah to marry Jacob in her place and trick him until after they spend the night together. Leah, however, does love Jacob and cannot bear to lie to him so she reveals herself. Jacob doesn't seem to mind and the couple spend the night together. The next morning, they conspire against Leah's father to allow Rachel and the other sisters to be married to Jacob as well. But as time goes by, Leah and Rachel grow jealous of each other's relationships to Jacob as Leah provides him with sons, but he loves Rachel the most. It's creepy and twisted, but makes for intriguing television.

Dinah's Relationship With Her Son

After Dinah's marriage to Shechem and then her brothers' murder of him and all of his people, Dinah is kidnapped and taken back to her family. She disavows them and heads back to the people she married into, where her mother-in-law takes care of her and helps her give birth to her son. However, her mother-in-law then takes the son and raises him as her own, with Dinah only getting permission to see him every once in a while as a slave. The book and miniseries differ a bit here, as Dinah and her son Re-mose grow closer in the movie until Re-mose finds out that Dinah's brothers killed his father, and he cuts ties with her until they are reunited many years later.

When Dinah finally returns home, it is thanks to her father's worsening condition. Her brother, Joseph, convinces Dinah that it is time to return and forgive the family. But in the book, Dinah finds out that her father no longer remembers her, so she does not go to see him before he dies. In the miniseries, however, that would never fly. Dinah does go to see her father and he at first recognizes her as his wife Rachel, but then realizes that her voice is different. He remembers her name when Dinah says it, but can't recall why he lost his daughter. Dinah finally grants him peace and forgives him as he takes his last few breaths. Dinah is able to leave the family once again, but this time in good graces and with a less heavy heart.

Surprisingly enough, the changes made in the miniseries actually make a lot of sense dramatically. Relationships in the story are strengthened and complicated in the different situations and it makes for a much more interesting experience than a straight, blind adaptation of the book. Whether or not you read Diamant's novel, Lifetime's adaptation of The Red Tent is worth a watch.

More like this
Idris Elba & Tom Hollander Lead This Year’s Must-Watch Christmas Flick
By Maxine Harrison
Letitia Wright's Aisha Encourages A Vital Conversation Around Immigration
By Maxine Harrison
The 'Firefly Lane' Book Ending Teases Way More Tears To Come In 2023
By K.W. Colyard
A 'Sex Education' Star Is Leading Your Next Fave Thriller
By Darshita Goyal
Get Even More From Bustle — Sign Up For The Newsletter