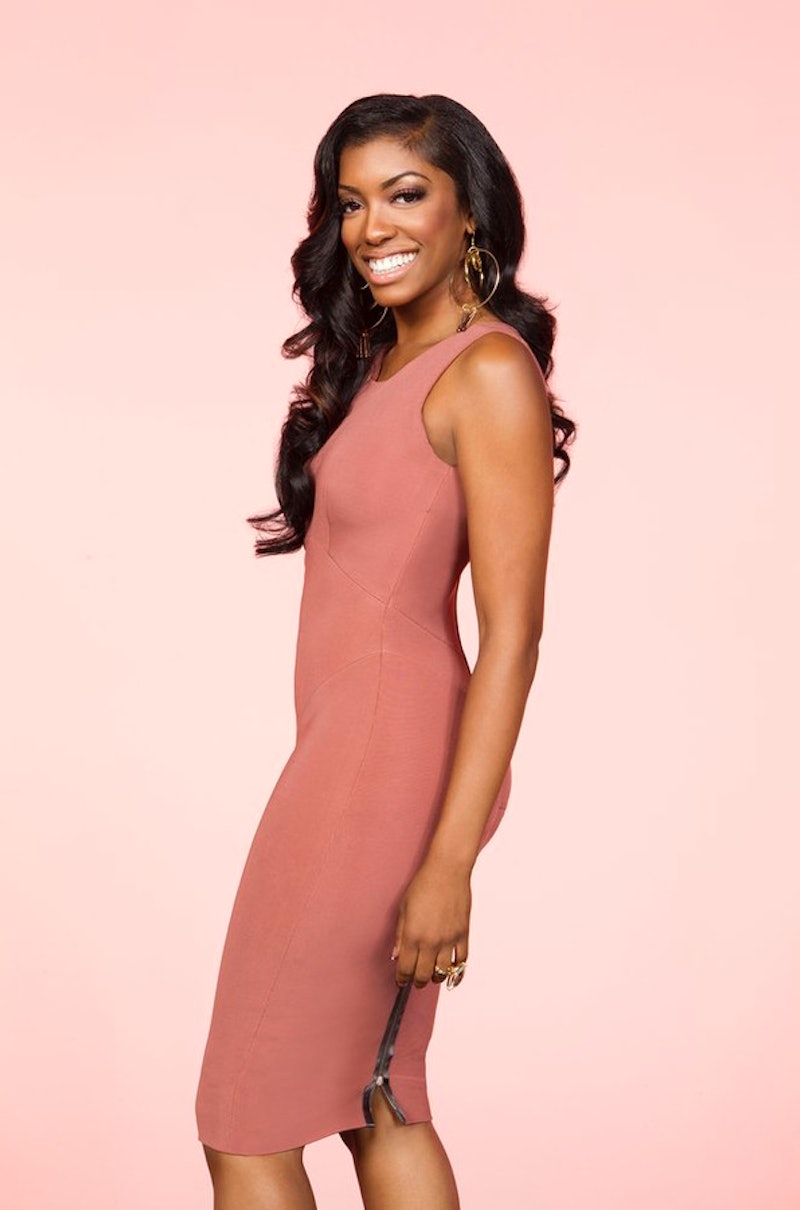 After getting divorced from Kordell Stewart between The Real Housewives of Atlanta Seasons 5 and 6, it feels like Porsha is finally coming out of her shell. Now, I just wonder if she's moved on from Kordell and has started dating someone new yet, just so we can all collectively wash the taste of their toxic-seeming relationship. But does Porsha even have a boyfriend? She made a small reference to Nene two episodes ago about one, in reference to her new house. Cynthia, in the midst of her total breakdown from "the rational, sane, normal" one to "the totally out of her mind ad hominem attacks" one, spouted off a lot of details about Porsha supposedly having a "sugar daddy" older boyfriend who's bankrolling her current lifestyle as she's adjusting to life on her own. After all, she wasn't given anything in her divorce, and last season we saw she had to move in with her mom for a while. Lots of new, cute shoes and bags (and blue jumpsuits), a super nice place… could it be that she's being spoiled by a boyfriend, or is that just the results of that sweet Ricky Smiley money?

Porsha's admitted that she relies on the paycheck from The Real Housewives of Atlanta to spend as extravagantly as she does, but the bump from main cast to recurring doesn't seem to be a problem for her. But Bravo producers don't normally leave in details like Cynthia's rant unless they're planning to bring them up again. There are a few reasons how or why this could come up later in the season. They could simply be trying to show how deep the wedge is between Porsha and Cynthia. They could be hinting at a rumor that everyone's talking about behind the scenes of the show. Or they could just be trying to give Porsha a storyline, since Andy Cohen reported he had to cut her from the cast for being too boring.

Over the summer, when the show was filming, it was rumored that Porsha was dating basketball player Norris Cole. But by early fall, it was rumored that she was early in a relationship with NFL player Lesean McCoy. Neither couple was photographed together or seen together — this is all based on some suggestive Instagram posts she put up. But since this all went down with McCoy early in October, she hasn't been dropping any more hints. Her Twitter account is totally clean. No weird messages with winky faces or accounts that favorite all of her tweets. And on Instagram, now it's all videos of her workouts, truisms about having loved and lost, and pictures of salad. #saddesklunch

Hmm… that looks a lot like a bunch of single people-ish to me. That doesn't mean it's impossible she's seeing someone, but a totally serious monogamous relationship doesn't seem likely. For now, I feel it's best to reserve judgement about who Porsha's mysterious beau could be.