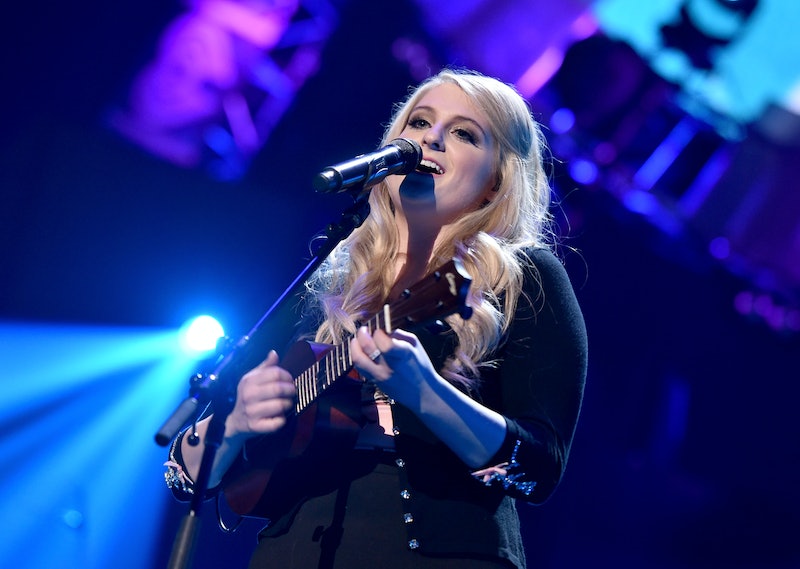 If you weren't sent into a debilitating shock that left you in bed all day upon hearing awards season was heating up (that'd be a very reasonable response, really), then you've probably seen the list of nominees for the 2015 Grammys. The nominees make for an odd, although somewhat predictable, group of people with nipple pasty-wearing Miley Cyrus nominated in the same category as I'm-going-to-fall-asleep-right-now band Coldplay. And speaking of predictable, that song you heard blaring from every grocery store, car, or frozen yogurt shop for the past few months is up for an award, too. Meghan Trainor is nominated for a Grammy for Record of the Year for "All About That Bass." It's an undeniably fun song, but does Meghan Trainor deserve a Grammy for it? I say, sure! Why not!

The other four songs nominated in Trainor's category are “Fancy” by Iggy Azalea featuring Charli XCC, "Chandelier” by Sia, “Stay With Me (Dark Child Version)” by Sam Smith, and “Shake It Off” by Taylor Swift. Notice anything particular about these? THEY WERE ALL EVERYWHERE FOR THE PAST YEAR (or ever sense they were released, at least). Things are a bit confusing with the Grammys because there's Record of the Year and Song of the Year with Record honoring everyone involved in the performance of the song (artist(s), producers, sound engineers, etc.) and Song of the Year honoring songwriters. So while you may have originally thought, "Meghan shouldn't get a Grammy, her song is just a simple, happy-go-lucky ditty about lovin' your booty that was played everywhere," that's totally cool, because this award is kind of all about that.

Recent past winners of Record of the Year include "Get Lucky" by Daft Punk, "Somebody That I Used to Know" by Gotye featuring Kimbra, "Rolling in the Deep" by Adele, and "Need You Now" by Lady Antebellum. These were all insanely popular songs. I'm not saying that the Grammys are a popularity contest, but at least Record of the Year seems to be. It's not that any of the songs that won were solely popular, they're all also quality songs with great vocal performances, but, ya know, you aren't finding some underground indie band or impressive, yet unpopular, jazz singer on here.

So, I say, yes, Meghan Trainor deserves a Grammy for "All About That Bass." It's catchy, it's cute, it has unique lyrics and a unique sound, her singing is great — I mean, she's no Adele, but let's be real, neither are any of the other nominees either. Sure, it might seem like a less serious song than "Chandelier" or "Stay With Me," but the topic Trainor talks about — self confidence — is an important one especially for young girls to hear. If "All About That Bass" wins Record of the Year, I won't think anyone was snubbed. Admittedly, this could be partially due to my cynical approach to the Grammys and partially because I'm not a super fan of any of these nominees, but still, the facts are there, people. Trainor's song does fit what seems to be the criteria for having the Record of the Year, so if she's wins I will don my best pastel outfit, wear a flower crown, and do the splits like that dude in the video.