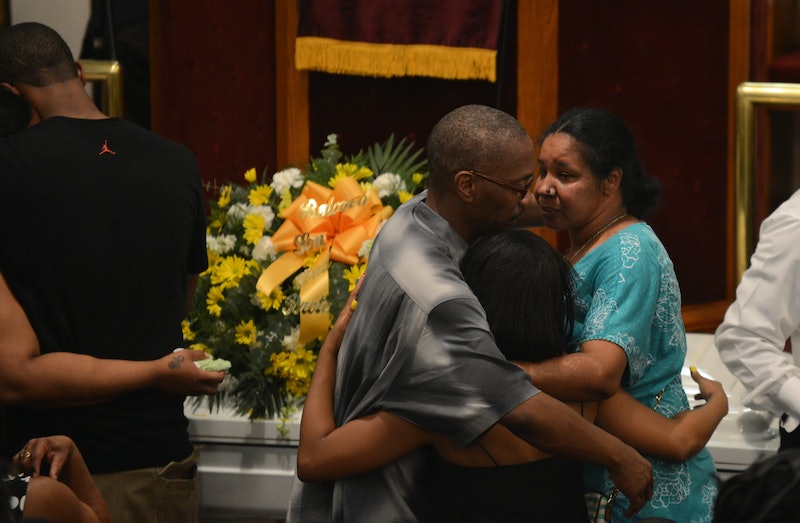 This week, thousands stepped out to protest the grand jury's decision not to indict officer Daniel Pantaleo in the death of Eric Garner. Their frustration and anger was nothing new — a continuation of the ongoing discourse on police brutality and racial profiling recently brought to the forefront by Ferguson. But amid a week — in fact, months — of sign-waving and rally crying, one of the most important things we can do for Eric Garner and his family is to simply remember him, not the central figure in a case study or national crisis, but Eric Garner, the husband, father, and man whose life was taken too soon.

Even though his death has dominated headlines, not much has been revealed about the 43-year-old man from Staten Island. What we can gather from family and friends' descriptions depict a congenial man whose death and apprehension was, needless to say, entirely unwarranted.

Garner was a husband, father of six, and grandfather of two, and his death left behind many brokenhearted relatives. Garner and wife, Esaw, met when they were just children and had been together for more than 20 years when he passed away. She told the New York Daily News the day of his death, "When I kissed my husband this morning, I never thought it would be for the last time."

In September, at a commemoration honoring what would have been Garner's 44th birthday, Esaw said through tears:

At this time last year, we . . . [were] sitting down at Applebee's eating dinner for his birthday, and now this year, all I can do is talk to the sky and hope that he hears me.

"He was a great dad — he's just a warm guy," Jewel Miller, the mother of his youngest child, described Garner to the Staten Island Advance. Though the two were separated at the time of his death, she has nothing but warm memories of Garner and how he cared for their 3-month-old infant, saying that he was "proud of his daughter."

Garner also leaves behind an 18-year-old son, Eric Jr., who graduated high school this past year and is now attending Essex County College on a basketball scholarship.

Others who were close to Garner describe him as a gentle giant and a "big teddy bear." Known affectionately as "Big E" around his Staten Island neighborhood, the 6'3" Garner was also widely known as a neighborhood peacemaker. In fact, the circumstances surrounding Garner's arrest are painfully ironic, as many eyewitnesses reported that he had not been selling cigarettes as the officers had suspected. Instead, he had just broken up a street fight.

Several neighborhood acquaintances testify to his kind character. Charlene Thomas, who works in the neighborhood, told the Advance:

Everybody that knows him will tell you that he's a wonderful person.

This guy was nobody's drug dealer. He doesn't drink liquor. He doesn't do drugs.... He was a gentle giant. Insofar as violence, I don't believe if you smack him in the face he would hit you back ... The police have no reason to attack him.

Though Garner has had an extensive history with law enforcement related to illegally selling loose cigarettes, he was also an upstanding citizen who most recently worked for the local city Parks and Recreation Department helping with horticulture crews and maintenance. Before that, he was a mechanic and a nightclub bouncer.

Unfortunately, he has\d been forced to quit several jobs due to health problems, which included chronic asthma, sleep apnea, and diabetes. His ailments caused him to wheeze and frequently stop to rest while walking down the street. In other words, he posed barely a threat to the four officers who pinned him down and surrounded him.

As the country continues to rally in anger over Garner's death, nobody is feeling the loss more than his family. Miller told the Advance, "I lost my best friend."Images: Getty Images (4)