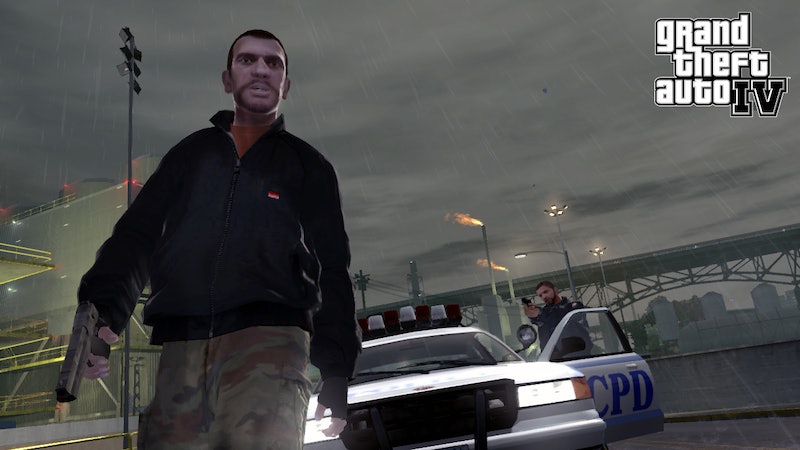 On Tuesday, Grand Theft Auto V made its much-hyped debut, and video-game commentators the world over proclaimed it the greatest, most glorious, gratifyingly entertaining edition of the billion-dollar GTA series to date.

The 16-year-old series has revolutionized the video-game industry with each record-breaking, darkly controversial issue. Each version is set in a different city, with a distinct (and always merrily violent) character or characters, and has spawned a series of lawsuits and roughly 4,000 articles. The gameplay is always pristine and cutting-edge, and this latest version — set in Los Santos, the slightly-fictionalized version of Los Angeles — is on track to make a billion dollars.

Though the game is typically understood to be about stealing cars and killing cops, it's oh so much more than that. In this episode alone, the user is presented with a plethora of potential pastimes: you can do yoga, skydive, play tennis, go scuba diving, take a bong hit, or get a lap dance. There's a fake Internet, complete with fake Twitter called 'Bleeter' (why didn't we think of that one) fake Facebook (LifeInvader) and fake Apple (Fruit). There's even a knock-off of 50 Shades Of Gray (it's called Chains of Intimacy, which is, frankly, a better title). There's enough in the Grand Theft Auto universe to spend months on, without ever having to face the same challenge twice.

GTA has a dark side, except it's not a "side" as much as a selling point: it's as gratuitously "bad" as you could imagine, and then some. The goal is to pursue a "story," including a number of side projects that correspond to the overall progress of the main character. In general, the protagonist rises in rank through the criminal underworld whilst pursuing the "almighty dollar." One reviewer put it this way:

"For me, Grand Theft Auto V’s extraordinary scope is summed up in two favorite moments. One is from a mid-game mission in which I flew a plane into another plane, fought the crew, hijacked the thing, and then parachuted out and watched it crash into the sea to escape death at the hands of incoming military fighter jets."

Ah. Just another mission, then.

When GTA originally launched, PR guru Max Clifford aided its "bad-boy" theme by planting deliberately controversial stories in the news media. Several European countries blanched at the first edition of the game — notably less dark than it exists today — and Brazil banned it outright. It's since sold 125 million units, and has spawned a series of lawsuits from families of murdered victims, who sued manufacturer Rockstar Games for "training" the murderers to use a gun. Before he was publicly disbarred, former lawyer and anti-video game advocate Jack Thompson told CNN that Rockstar was accountable for training and promoting murder:

There's no doubt in my mind... that, but for Devin Moore's training on this cop killing simulator, he would not have been able to kill three cops in Fayette, Alabama who are now dead and in the ground. We are suing Take-Two, Sony, Wal-Mart, and GameStop for having trained Devin Moore to kill. He had no history of violence. No criminal record.

GTA weathered the lawsuits without much ill effect — if anything, the public outcry added to the already formidable reputation of the game. Two sub-GTA games then took the spotlight: one required the user to learn how to, and dabble in, drug dealing, and another that engaged the user in crude, fully-clothed sex with one of the protagonist's (up to six) girlfriends.

Indeed, the game engages the user in a world where the feminist revolution simply didn't happen. (That said, GTA has a popular female-player base.) In the latest version, one of the only characters that isn't a "dumb blonde" is sucked into a jet turbine. When asked if he'd thought about the portrayal of women, the game's maker told the New York Times: “Seemingly not as much as I should have.” Women are generally sex-crazed and idiotic, which feeds pretty well into the game's fundamental testosterone-loaded, rule-breaking image.

Then there's the waterboarding. The player engages in the torture technique in order to complete "missions." There's also a fake child-abuse site for pedophiles — which can't be accessed, but is mentioned, and any attempt to access it sends the player's "Wanted" score sky-high — and an option to drive while intoxicated. (Mothers Against Drink Driving fought fiercely against that one, and the next edition of GTA made it more difficult, though not impossible, to drink and then drive in-game.)

Critics of GTA have noted that the U.S. military uses similar tactics — i.e. repeated simulations of shooting — to make soldiers more accustomed to killing, and that the game is being handed over to preteens regardless. And when the 2008 edition of GTA was set in a fictional metropolis heavily based on New York, the city's authorities freaked out and stated that under no circumstances did they support the setting. (You can decide how much creative license they used below.)

These days, the lawsuits facing GTA have slowed to a standstill, though the Guinness Book Of World Records still names it the most controversial video game of all time. It's important to note that even though convicted murderers have admitted to playing GTA, and their defense lawyers have used it as a tool for arguing they were brainwashed, the link has never been proven to be anything other than causal. It's also an intensely sharp and clever game, by many accounts. The almighty New York Times said it themselves:

One of the more intriguing bits in the game, given Mr. Houser's [game creator] personal history growing up in London, involves a pair of deluded anti-immigrant activists who set up a civil border patrol and stun-gun American mariachi performers. “I’ve been here 15 years and have an American passport but still feel like an immigrant, am an immigrant, always will be one."