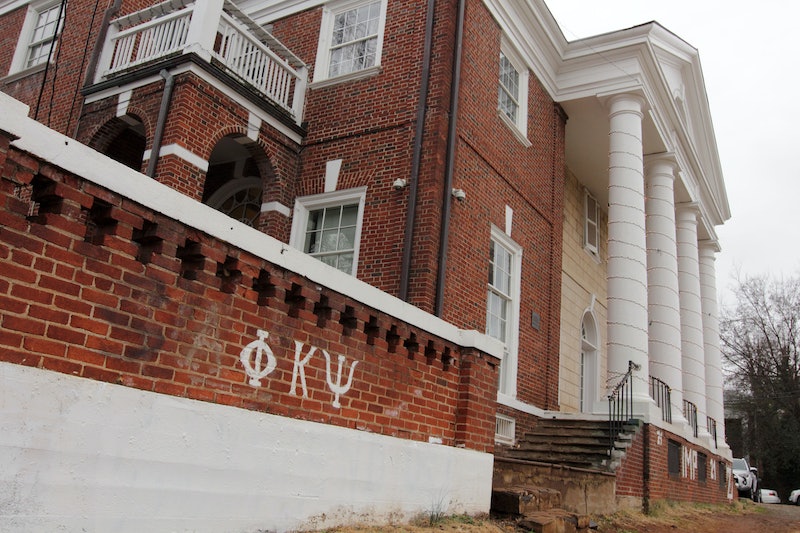 On Friday, just one hour after Rolling Stone published a formal apology note about its article about an alleged gang-rape at a fraternity — named as Phi Kappa Psi by the article — of the University of Virginia, Phi Kappa Psi released its own statement on the story. In it, Phi Kappa Psi vehemently denied key allegations made by Rolling Stone in the article, as The Washington Post had reported it would. It added that it was fully compliant with the criminal investigation into the fraternity.

The article thrust UVA, and in particular Phi Kappa Psi, into the spotlight, and UVA responded by temporarily shutting down all fraternities. Rolling Stone's decision to name the specific fraternity the accused had named led to the fraternity becoming symbolic of sex assault on college campuses across the nation, and passionate demonstrations were held in protest of Phi Kappa Psi both outside the fraternity and elsewhere.

In its apology note, Rolling Stone wrote that there were "discrepancies" in the article, writing that their trust in the victim, "Jackie," had been eroded and they no longer stood by parts of her story. The specific parts of the 9,000-word story that were in question weren't explicitly named by Rolling Stone, but The Washington Post and other outlets have said that several notable details were false. Phi Kappa Psi never held a party the night that Jackie said she was assaulted, the fraternity said in its statement, and specific details Jackie told Rolling Stone about her attackers don't check out with the fraternity's members.

Over the past two weeks the Virginia Alpha Chapter of Phi Kappa Psi has been working tirelessly and openly with the Charlottesville Police Department as they investigate the allegations detailed in the November 19, 2012 Rolling Stone article. We continue to be shocked by the allegations and saddened by this story. We have no knowledge of these alleged acts being committed at our house or by our members. Anyone who commits any form of sexual assault, wherever or whenever, should be identified and brought to justice.

In tandem with the Charlottesville Police Department’s investigation, the Chapter’s undergraduate members have made efforts to contribute with internal fact-finding. Our initial doubts as to the accuracy of the article have only been strengthened as alumni and undergraduate members have delved deeper. Given the ongoing nature of the criminal investigation, which we fully support, we do not feel it would be appropriate at this time to provide more than the following:

First, the 2012 roster of employees at the Aquatic and Fitness Center does not list a Phi Kappa Psi as a lifeguard. As far as we have determined, no member of our fraternity worked there in any capacity during this time period.

Second, the Chapter did not have a date function or a social event during the weekend of September 28th 2012.

Third, our Chapter's pledging and initiation periods, as required by the University and Inter-Fraternity Council, take place solely in the spring semester and not in the fall semester. We document the initiation of new members at the end of each spring. Moreover, no ritualized sexual assault is part of our pledging or initiation process. This notion is vile, and we vehemently refute this claim.

It is our hope that this information will encourage people who may know anything relevant to this case to contact the Charlottesville Police Department as soon as possible. In the meantime, we will continue to assist investigators in whatever way we can.

More like this
Chris Kaba's Family Continue Fight For Justice After Viewing Police Bodycam Footage
By Sophie McEvoy
Women Around The World Are Cutting Their Hair In Solidarity With Mahsa Amini
By Darshita Goyal
Black History Month UK’s 2022 Theme Calls For Action, Not Words
By Maxine Harrison
Mel B Speaks Out Against Domestic Violence In A Powerful Speech
By Sophie McEvoy
Get Even More From Bustle — Sign Up For The Newsletter