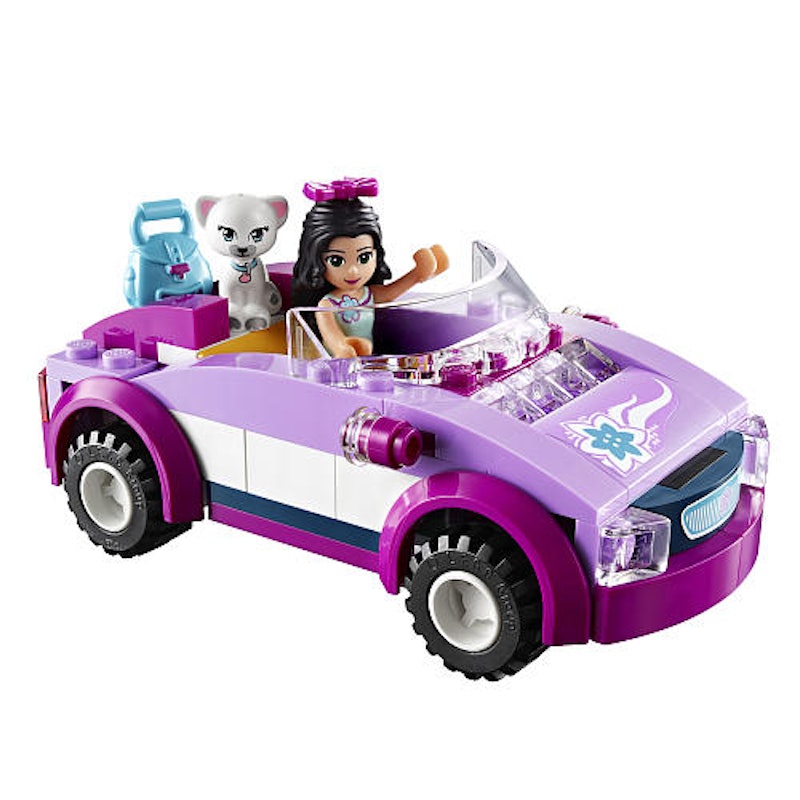 Playing is an integral part of child development and allows socialization, creativity, and identity to flourish. But this is precisely why we should raise a wary eyebrow at the new Legos: Friends collection for girls. Legos has tried to market their product to young women in the past, though without much luck. However we should ask ourselves whether that’s a result of a cultural affirmation that toys like Legos are traditionally for boys, or whether building-by-numbers is simply uninteresting to girls (spoiler alert: it’s the former).

In the commercial, a small girl plays with her Lego: Friends sets. As the video plays through set to the tune of an emotive piano refrain, the viewer catches glimpses of helicopters, castles, and vacation homes as the child constructs her imaginary building block kingdom. "I'm about to make something that I know will make you proud," says the voiceover, intended to tug at the heartstrings of parents about to embark on their holiday shopping pilgrimage. And all of this certainly seems inspiring, until you notice that nearly all of her toys are noticeably, er, pinker.

When examining the collection as a whole, it's made immediately clear that the interests of the female Lego characters include shopping, cooking, and vacationing. Lego managed to tap into Barbie's feigned "empowerment" campaigns by creating a line with just the right amount of adventure, while still managing to perpetuate traditional sexist narratives. The Friends collection includes a (pink) shopping mall, (pink) pet salon, and (pink) downtown bakery. There's also a camper, a cruise ship, and a safari jungle, the latter of which miraculously manages to reign in the pastels to maintain some level of authenticity.

Femininity and masculinity are learned behaviors, so when we apply those behaviors to young boys and girls, we systematically apply undue pressure to adhere to the cultural restrictions outlined by those gender binaries. Additionally, research has found that gendered toys can stunt emotional development in children, complicate sexual identity, and even lead to bullying. "Gendered toy marketing divides a child’s ability to learn about the world based on gender constructions that are culturally determined," says Melissa Atkins Wardy, author of Redefining Girly, a book aimed at educating parents about sexualization and stereotypes faced by young girls. "When all of the marketing consistently revolves around gender, it teaches our kids to look at the opposite sex as a different species, because in order to market gendered toys, you have to point out the difference and not the similarities."

Far from suggesting that children shouldn’t be allowed to play with gendered toys if they enjoy them, many people are simply suggesting that parents not encourage their children to move one way or another on the gender spectrum. Rather, encouraging children to pursue their own identities may encourage healthier and happier senses of self. And as consumers, it's important to remember that despite the efforts of capitalism to bait us with their female empowerment agenda, at the end of the day they're still trying to sell us shit. Watch the clip below.

More like this
25 Quotes About Love To Share During Pride Month 2022
By Madeleine Aggeler and Emma Garza
Meet The Spice Company Founder Who Sees Chai As A Metaphor
By Madhuri Sathish-Van Atta
Remember These Ancient Pieces Of '90s Tech?
By Lucia Peters and Emma Carey
11 Trends From The ‘90s That Made You Feel So Cool
By Julie Sprankles
Get Even More From Bustle — Sign Up For The Newsletter