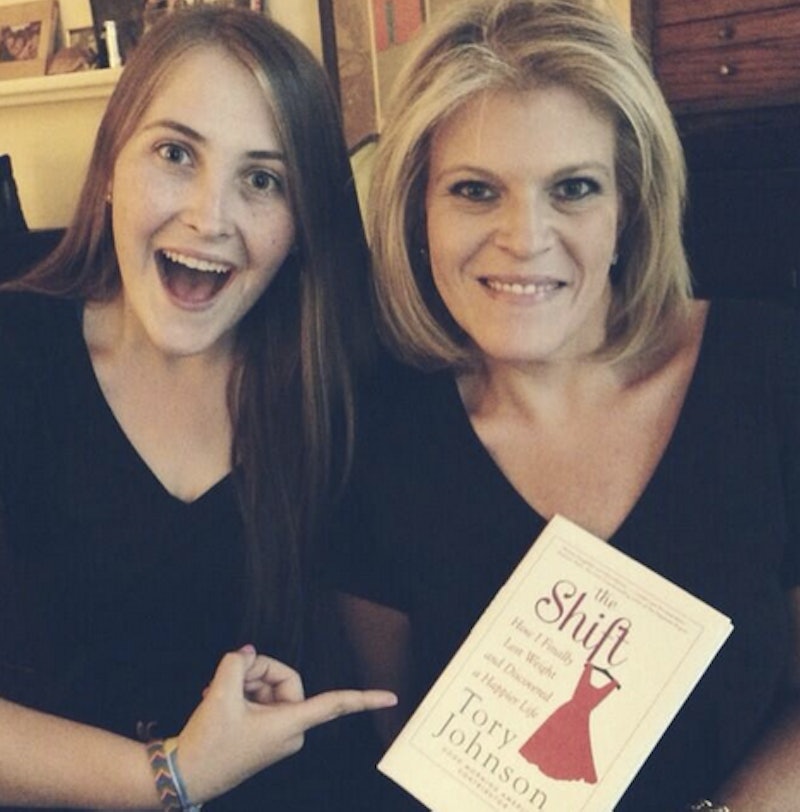 Tory Johnson, contributor on Good Morning America, was not-told to lose weight, which is to say, nobody ever told her she had-to had-to lose weight, just that it would make her look better and, oh yeah, feel happier, too. Johnson explains that she was not-told to lose weight by ABC News boss lady Barbara Fedida, "the highest-ranking woman at ABC News," which means: pressure. Big, jobby-job type pressure. And in a move that strikes way too close in tone to this hilarious Kristen Wiig scene from Knocked Up , the two apparently spoke only superficially of Johnson's visual shortcomings.

Because to explicitly use the words "lose weight or your job" in a meeting is a serious faux pas of the HR-iest order. It's not allowed, and with good reason. An ability to do one's job should have nothing to do with their weight, but rather their contributions! So how, then, do these conversations even happen? Well, they usually happen very passive aggressively, and under the guise of concern. That said, however inauthentic or genuine such concern may actually be is wholly dependent upon the people and the stakes involved ... but we're not talking about quantifying how justified Fedida was or was not in her concern.

Saying something like "you don’t look as good as you could ... I don’t think your clothing does you any favors" is, frankly, a cop out. It's a lame way of ignoring the heart of the matter, which is, in this instance, "hey, fatty, I think you're fat." Sometimes, though, people just don't care about their weight, or feel happy how they are. Oftentimes, though, the heart of the matter is that people feel so beat down by this/that/the other thing, that they can't bring themselves to care about themselves. Something within their own self-worth is off and — be you a celebrity or a normal — the only way to make a change is to look inward, not outward.

Listen — far be it from me to tell anyone to or not to lose weight. Different things work for different people. We've all struggled with our own bodies (myself included, times approximately a billion), but the only time major life changes like this truly stick is when you're doing it for you. Why do you think so many people fail to lose weight? When you're trying to find balance and happiness, it can only be derived from your internal business being HANDLED, ya know?

Any other time, you're simply attempting to appease the masses; trying to fit into some boxed-in ideal of what a human should be for the benefit of other people's eyeballs who only want to see and be surrounded by a superficially-tinged, visual-only ideal of what perfection "should" be.

For whatever reason, visual sameness is what brings them peace of mind. Hoping that all of these external perceptions and subsequent acceptances following said weight loss or plastic surgery will make us better is a flawed, misguided, and ultimately an unrealistic way of making yourself happy.

Because doing things for "them" is fucking stupid, be it for your job or otherwise. We all know nobody is perfect, and care-shaming someone into fitting whatever your perceived "perfect" ideal is on the outside is yet another way for people to hide and/or avoid dealing with the human being underneath. Mind, body, and soul levels of happiness? Those are the hardest ones to achieve, and cannot be fixed by visual Duct tape alone.

But ultimately, those levels of happiness are the ones that are worth a damn. The sort of happiness that makes people give none of the fucks? That comes from ascribing to an idea most-brilliantly stated by a one RuPaul Charles: "what other people think of me is none of my damn business!" That's not anything that can be truly absorbed from a book, but rather something that must be internally experienced, learned/understood, and then forevermore built upon.

What other people think and feel about you only brings the easy, quick-fix hyper-shot of happiness. An addictive feeling, to be sure (why do you think so many actors are in the business they're in?), but when it's found in the wrong place (i.e. through other people and not yourself), you are just replacing one void-filling addiction (food, inactivity, self-destructive behavior, etc.) with another. But this one allows other people to say "but look at them! They look fine, physically, so they must be fine!", lulling people into a false sense of contentment.

Which is why the idea of praising celebrity weight loss like Tory Johnson's is such a double-edged sword. When someone is on that feel-über-shitty-about-yourself tip, it's hard to tell the difference between pressure and inspiration. And in that headspace, let's be frank: you'll turn to pretty much anything to get out of it. Someone looking for guidance may look to their favorite celebrity whose lost weight and try and do what worked for them. It might even work, to an extent!

But until people get to the real heart of the matter as to what really makes them unhappy with themselves, perpetuating this façade of perfection as an actual catch-all for personal happiness is misguided and maybe even dangerous in the byproducts it creates, namely, an entire industry that continues to poke fun at a huge chunk of the population, allowing for continued discrimination and insecurity, while also continuing the double-standard of the "you must be thin in order to be an accepted member of society" way of thinking.

So while I'm happy for Johnson that she found some sort of happiness within herself that allowed her to push and ultimately meet her weight loss goals, the pedaling of a book in an already over-saturated industry built on the idea that people should always feel shitty about themselves, is not something to be too keen on. Each and every person has to find the strength and inspiration within themselves — and only if they're sure as shit it's what they want.

More like this
Twitter Is Identifying With Sally Field & Jane Fonda’s Friendship In New Viral Video
By Jake Viswanath
You're Aging Your Body Too Quickly If You're Not Doing Any Of These Things
By Bimini Wright
Instagram & Facebook May Finally Lift Their Notorious Nudity Ban
By Allie Fasanella
10 Muscles You Work During A Kettlebell Swing
By Carolyn Steber
Get Even More From Bustle — Sign Up For The Newsletter
From hair trends to relationship advice, our daily newsletter has everything you need to sound like a person who’s on TikTok, even if you aren’t.