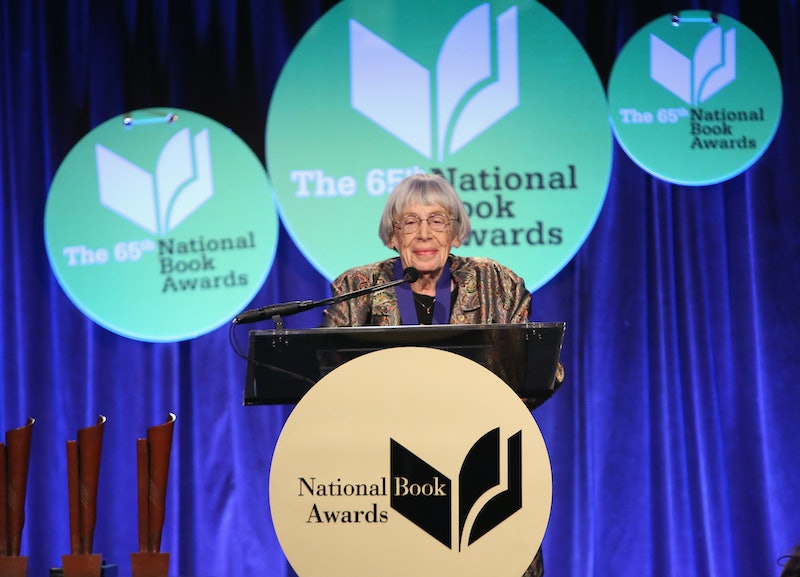 I’m 12 years old, one month away from entering my thirteenth year. Sundays are horribly boring — my loneliest day of the week. My friends’ families have religions, and mine doesn’t. So I’m free, but alone.

Dispassionately, I pick through a box of ignored holiday gifts, then yank out a book my parents gave me: Very Far Away from Anywhere Else by Ursula K. Le Guin. It's in the pile partly because the curling font feels outdated, looping and scrolling off to one side as if even the letters want to leave.

It begins, “If you’d like a story about how I won my basketball letter and achieved fame, love, and fortune, don’t read this.” I'm interested.

Long before Le Guin went viral with her acceptance speech at the National Book Awards decrying the new commodification of literature, she published a tiny novel for a young adults. Very Far Away from Anywhere Else is not spoken of as frequently as Earthsea or Hainish, and there are other books that changed me as a writer — Orlando, Lolita, White Noise, Fortress of Solitude — but this book changed me as a person. That’s the power of books you read when you are young.

When I picked up the novel, I don’t think I knew how much I needed what it contained. A perfectionist already, I couldn’t admit to myself that I wasn’t just bored that day, but lost.

Very Far Away from Anywhere Else by Ursula K. Le Guin, $6, Amazon

The narrator, Owen, age 17, talks about how he feels constantly pressured to be less smart — and how the pressures he feels, from outside forces plus what he puts on himself, will eventually drive him right off a cliff in a brand new car with all the extras. Owen’s father has bought him the car for his birthday: a tremendous gift, except Owen doesn’t want the car, or what it stands for.

Owen meets Natalie, another ambitious teenager, who's fierce and confident and unconcerned with what the crowd is doing — and for the first time Owen can remember he's able to be himself. “Sometimes I wonder if introverts have a peculiar smell,” Owen says, “which only extraverts are aware of.” Owen convinces himself he’s in love, and when he makes a move, Natalie rejects him. He descends into a depression and is more alone than ever. He drives around a lot, and eventually off the road in a passive-aggressive act of self-destruction.

Rereading Le Guin in a Laundromat on my cell phone now, I fight tears.

Rereading Le Guin in a Laundromat on my cell phone now, I fight tears. The child I was when I first read these words rushes back in sensory memories, the same way a song or scent can evoke a time in your life: the absolute aloneness of being a teenager; the face I would twist up into a smile to make parents or teachers happy; the confusion of the huge adult things that were happening in me and around me.

That year a friend of mine was being bullied by another girl — let’s call her Cameron. Cameron had that wonderful ability of honing in on a person’s weakest point, going right for it. Her talents were mostly saved for my friend, from verbal barbs to actual punches, but one time when I intervened, Cameron had an ace line for me: “You think you’re so good, just because you’re a Schultz.”

In a factory town, my father was a high school English teacher, my mother a secretary, all my brothers and me university-bound. To be a Schultz was to be studious, proud. Not rich, but in the context of the town, different.

I must have heard Cameron’s line echoed 30 more times by other kids over the next few years, including some really dear friends. What it meant was: You don’t have any real problems. And the reason people thought so was because I let them think that.

We never used the word “kidnapped.” Still don’t. In our middle-class way we protected ourselves from that, avoided using a word that would make it almost impossible not to break down.

At that time, my grandmother had been dead a year and we were still mourning. I watched my parents grieve and change. They retreated into themselves more. There was more drinking than the years before. Somewhere in that year my younger cousin went missing from our family. My uncle and aunt were embroiled in a terrifying divorce. One day she took the boy on vacation — they disappeared. There were family members who stopped speaking to each other for decades. We never used the word “kidnapped.” Still don’t. In our middle-class way we protected ourselves from that, avoided using a word that would make it almost impossible not to break down. It would be 26 years before I saw my cousin again — when he found me on Twitter, a grainy black-and-white profile pic of a man.

A hole yawns open in my guts when I think back to all this, how much and how little I knew.

I told no one — not even my closest friends. Instead, I sat alone on that Sunday and tried not think too much about any of it. Like Owen in the book that I held in my hands, I walked in a fog.

“I think what you mostly do when you find you really are alone is to panic,” Owens reasons. “You rush to the opposite extreme and pack yourself into groups — clubs, teams, societies, types. You suddenly start dressing exactly like all the others. It’s a way of being invisible.”

When I was 16 and fell in love with an older boy — truthfully an adult — I remembered Owen and Natalie, and to not be shortsighted in my decisions.

I was tense all the time. I used to walk around with my shoulders stitched up, stiff as chicken wire. At school my grades had slipped and I was no longer the top of my class. I was sulky and private like Owen, but I longed to be strong and self-directed like Natalie. She dedicates her life to her music, knowing she'll have no financial reward. She is the one who asks Owen the hard questions about equality — saying their relationship should be more than just a yes-we-will or no-we-won’t dynamic. “If we’re friends … then we make the decisions together, don’t we?”

When I found myself going through a depression in high school, instead of doing what Owen did — walking in the fog, throwing away his acceptance letters — I found help. Over the next few years, I had to learn not to hide so much. I learned to reach out more, and how to trust again — something I really stopped doing in the year that my family became estranged.

When I was 16 and fell in love with an older boy — truthfully an adult — I remembered Owen and Natalie, and to not be shortsighted in my decisions. I wanted to sleep with him, but I didn’t. The imbalance between us held me back. Not all the sexual experiences I later had were perfect, not by a long shot, but when they happened they were with partners with whom I had equal footing.

I wrote more in my notebooks. I got serious about writing. I grew up and I forgot about Le Guin’s book. I'm 40 now with a career, a husband, and a toddler. Reading Very Far Away from Anywhere Else again, I see it as the simple story it is, but one that blooms with complex themes tied to a moment in my life.

Like all Le Guin’s work, Very Far Away from Anywhere Else is about the invisible structures of society and about the challenge to live honestly. On a Sunday years ago I was lucky to encounter a book that could show me the breadth our lives have — that the discovery of what leads us on is better than the goal of perfection.