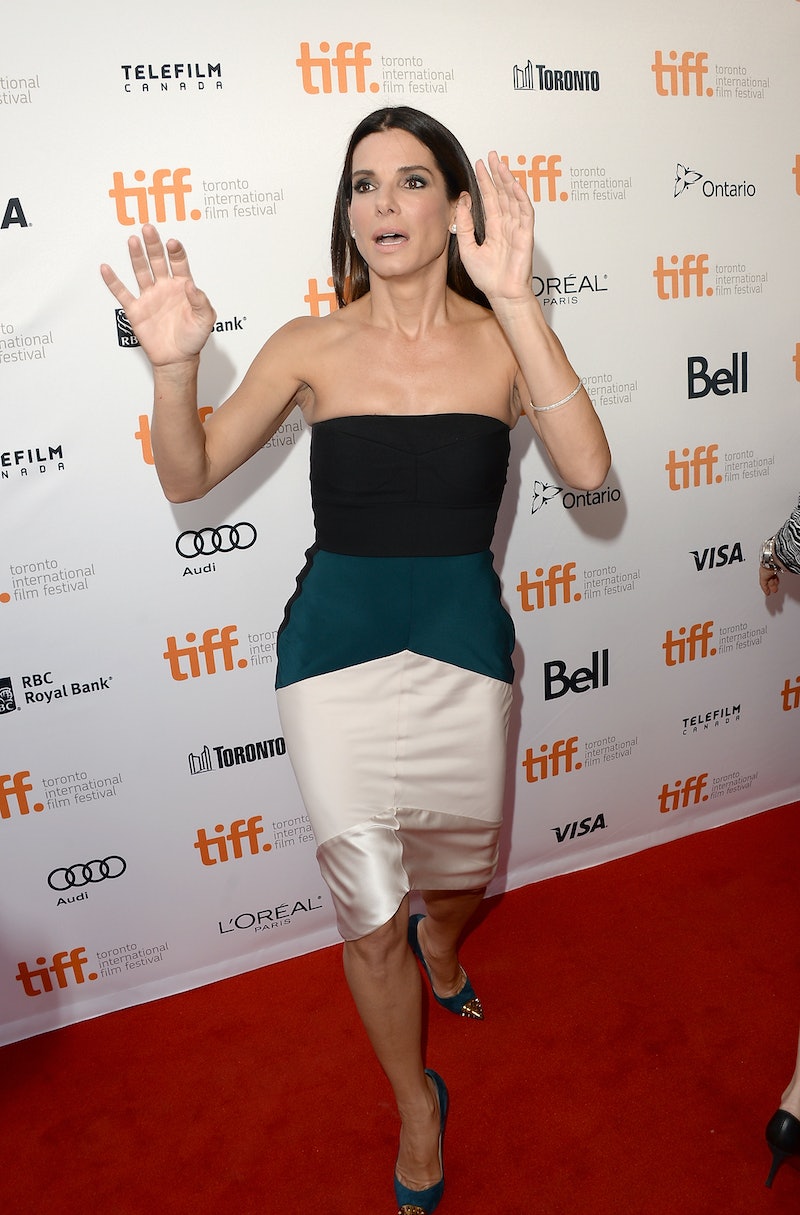 Sandra Bullock's new film Gravity looks absolutely terrifying — until the trailer, we didn't know we had a deep-seated fear of being stranded in space but apparently, we do, and it's a bad one. Its Oct. 4 release date looming, Gravity also means Bullock's been making the rounds, promoting the film and reminding us of all the qualities that've kept her in the biz for over two decades. Here are some of the best things we learned about Bullock from her new profile in Vogue:

She owns Walton's Fancy and Staple, a local flower business that "looks like the kind of establishment Jimmy Stewart might have taken someone on a first date." She also converted a law offife into a bistro three years ago. About her status as business owner:

It makes her happy. “The acting thing is so beyond my control,” she says. “Acting isn’t mine, you’re like a tiny piece in this big, corporate mechanism that needs chemistry and divine intervention.” She looks at the tables behind us, full of families meandering on a long summer Sunday. “This is mine.”

She keeps chickens at her California home, named after comedians:

She's got a Carol Burnett, Wanda Sykes, and a Phyllis Diller who "was revealed to be a rooster and rechristened Phil Diller."

“Work was my life before,” Bullock says. “Now I have no reason to leave home."“Quality control,” she says.

Gravity demanded Bullock face one of her worst fears:

Sandra Bullock is terrified of flying, but the production planned to replicated antigravity by "putting Bullock inside a specialized airplane nicknamed the Vomit Comet, plunging out of the sky to create brief moments of weightlessness."

Tough cookie that she is, she said yes anyway, saying "At one point I sat down and said, ‘What is it about this movie that is telling me to get off my ass and get over something that has paralyzed me?’”

Lucky for her, the Vomit Comet was canceled due to logistics and replaced with a set.

She lives a genuinely quiet life focused completely around her son Louis:

Bullock and Louis (pronounced LOU-ee) remain an inseparable tandem. “Louis is number one, and the next one down is 101,” says McCarthy. “He takes up the first hundred slots in her life.”

"I don’t want him to have pressures brought on by what I do, [Bullock said]. "I will quit. I will leave. If I see whatever I’m doing affecting him negatively, I will pack up and move to Alaska.”

It all sounds pretty sweet and devoted.

Bullock says Louis is only vaguely aware of his mother’s day job. To him, she is somebody better. The hugger, the holder, the keeper of the food. The reader of Thomas the Tank Engine and The Runaway Bunny. Theirs is a quiet, domestic life.

You can read the full profile over at Vogue. In the meantime, just sit in a corner somewhere and recognize the fact that you are still less down to Earth than international movie star, Sandra Bullock.