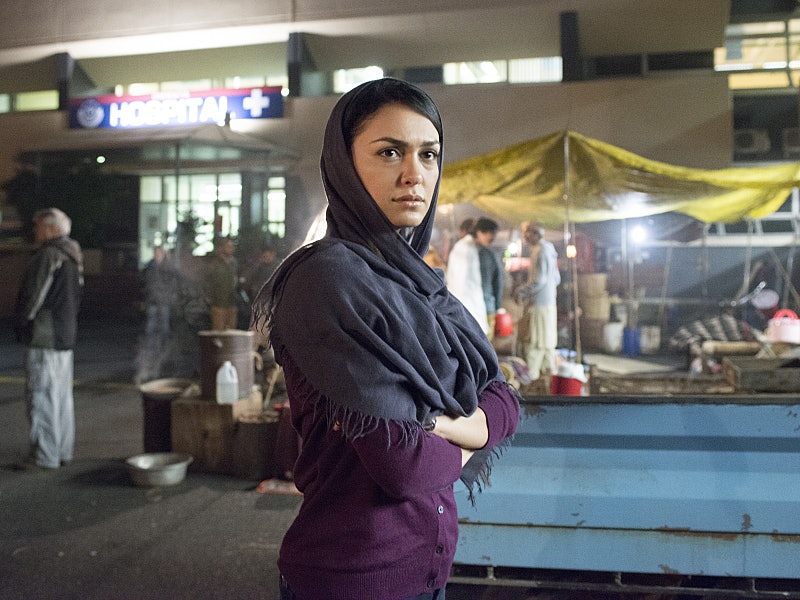 Looks like today was "let's play Russian Roulette with the entire supporting cast of Homeland time" — no one was safe (well, it was pretty clear Senator Lockhart was safe when he flattened himself against the wall as soon as Haqqani's men opened fire, and proceeded to haul ass to higher ground). But other than him? Quinn, Max, both the Boyds, John Redmond, and Fara's fates were all up in the air — and unfortunately, two of them drew the short straws in Sunday's episode of Homeland as Redmond and Fara both died.

They teased us with Fara's death early on — Haqqani singled her out, asking her why she, a Muslim, kills other Muslims, then threatened to shoot her if she didn't reveal the location of Lockhart's list (a list of all of the CIA assets in Pakistan — in other words, traitors to Haqqani's cause). We didn't see her or any of the others crack, but as soon as Haqqani came a knockin' (with a several gunman aiming at several hostages in tow), it became clear that someone had.

All Haqqani wanted was Senator Lockhart with the list, so he made it clear that he was going to keep killing until he got it. A couple of people lost their lives point blank before he finally snatched Fara up with a knife to her throat and held her up to the camera. As soon as Haqqani grabbed her, Max offered himself in her stead, which was nice, but a bit odd storytelling-wise — we'd barely even gotten a glimpse at their characters all season, so it was hard to be emotionally invested in their relationship (which may have been one-sided on Max's part — we don't even have the privlege of knowing that).

Even with Fara's life hanging in the balance, Ambassador Boyd wanted to hold her ground — she did her best to forbid Lockhart from going outside, telling him that Haqqani would certainly kill Fara (not to mention the rest of them, plus all the assets on the list) regardless, but he literally threw her to the ground and muscled his way through. Terrible, yes, but an oddly sympathetic moment for Lockhart, who tends to be the show's resident windy blusterer, whose biggest positive attribute is his wonderful use of frequently dropped F-bombs (tonight we got "Back the f**k off" and "Jesus f***ing Christ," among others).

He went to open the door but of course — of course — it's on a countdown, so he had to wait 60 seconds... which gave Quinn (who snuck up behind Haqqani) enough time to figure out a game plan. He convinced the marine along with him to open fire on Haqqani and his men, in the hopes of sweeping them out, but then everything happened too fast. Lockhart came out holding the list, and gave it to Haqqani. Fara got about one millisecond of heartbreaking relief before Haqqani promptly stabbed her — and then all hell broke loose. In a standoff, Quinn and his marine friend managed to pick off most of Haqqani's men before following them, but of course, they'd thought of that: They set off a bomb and collapsed the corridor, and escaped.

And then there was just Max, cradling Fara in his arms beside a too-large puddle of blood — and that was that. Did her death feel at all... cheap to you? Yes, it packed a punch (especially when Max confronted Carrie over her treatment of Fara, who worshipped the ground she walked on), but was it earned? Did we even see Fara enough this season to really know her? It was great to see her taking to the field in the first half of the season, but she's been largely dormant in the last several episodes — to me, it felt almost like Redmond's death at the beginning of the episode: a reminder of the stakes of what's at play, rather than an actual emotional death.

Don't get me wrong, it was sad, and I thought Fara was a fascinating character (and Nazanin Boniadi a good actress), but it's always been hard for me to reconcile character death as plot device.

More like this
Who Could Die In The Stranger Things Season 4 Finale?
By Kadin Burnett
Everything We Know About When To Expect Money Heist: Korea Part 2
By Kadin Burnett
Julie Andrews Revealed A Surprising Behind-The-Scenes 'Bridgerton' Detail
By Grace Wehniainen
'Stranger Things' Star Joe Keery Ditches The Upside-Down With New Single "Change"
By Radhika Menon
Get Even More From Bustle — Sign Up For The Newsletter