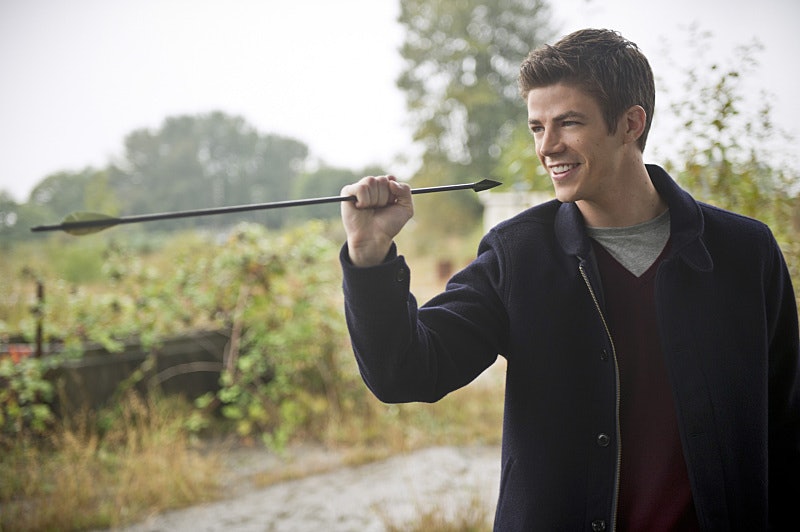 We've seen Barry Allen do some pretty awesome feats as a superhero thus far on The Flash. He heals quickly and burns through alcohol with a vengeance, thanks to a faster immune system. He's run up the sides of buildings and vibrated his voice and face to conceal his identity. He's contended with a very colorful rogue's gallery full of cold gun-toting criminals, weather-controlling mad men, and even a childhood bully turned-metahuman. During the Arrow crossover, we even saw The Flash fight Green Arrow to a tie. Barry Allen is indeed the fastest man alive. But what do the comics say about how fast The Flash can run?

Let me geek out about some DC Comics weirdness that will help explain Barry's abilities as The Flash. So in DC Comics, all speedsters (even villains like Barry's Reverse-Flash/Professor Zoom) tap into what's known as the Speed Force, which has had a variety of different explanations depending on what the writer is trying to accomplish. The Speed Force has been described as a fantastical location on another plane of reality, the source of all speed, and even a godlike intelligence. One of the most interesting explanations is that it is a force generated by Barry Allen. That should give you a good idea of how Barry ranks when it comes to speed-based characters in the DC Universe.

The Speed Force is also used to measure velocity in the DC Universe. Comic Vine describes the rankings of the Speed Force succinctly saying, "It is usually referred to in terms of different barriers: The Sound barrier, Light barrier, Time Barrier, Dimensional Barrier, and finally the Speed Force Barrier." Each barrier representing a greater level of speed than the previous one. Guess who is capable of breaking all the barriers? Barry Allen.

Barry tries not to go above Mach 10, since that causes some gnarly damage to the environment around him. Writers tend to play around with the abilities of other Flashes quite a bit, so it can be hard to pin down who the most powerful hero to take on that name really is. I may be biased, but I always got the impression Wally West was faster and more powerful than his predecessor. He's also been deemed more popular, landing well ahead of Barry Allen on IGN's list of 100 Greatest Comic Book.

Bart Allen, aka Kid Flash, Barry and Iris' grandson, also has shown pretty nifty abilities we haven't seen in other heroes who have taken on the mantle. But considering how DC Comics handles things and how canon has been altered since the inception of the New 52, let's just say that presently, Barry Allen is the fastest Flash.

One question that's come up from fans quite a bit: Is The Flash faster than Superman? In various animated series and comics we've seen Superman race The Flash to a tie. DC likely wants to keep the shine on their biggest hero, Superman, so it sort of makes sense why this would happen. Thankfully in The Flash: Rebirth, written by Geoff Johns an executive producer on The Flash, we get a definitive answer. Barry tells Superman that he held back in the other races because they were all for charity and proceeds to leave Superman in the dust.

Barry Allen proves that when it comes to speed, Superman isn't really much competition. In Tuesday night's midseason finale, "The Man in the Yellow Suit", we'll see how Barry Allen stacks up against his greatest foe to date, Reverse-Flash.