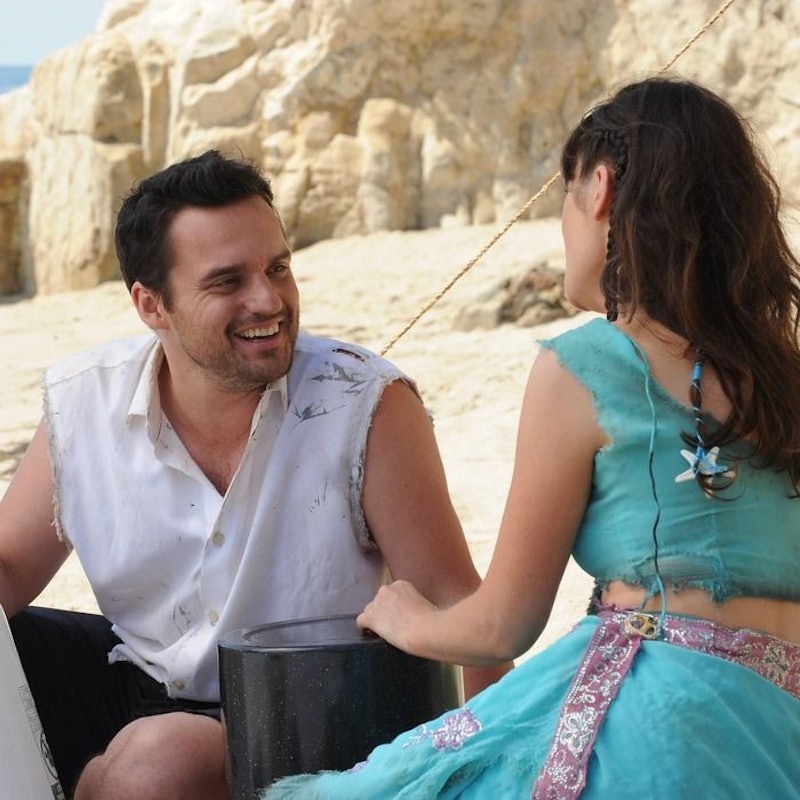 We pick up right where season two left off—Nick and Jess drive away from Cece's non-wedding, babbling about how much they "really like" and "really, really like" each other, then pull over and totally bone in the backseat. "I'm really fighting the urge to buy you a lobster dinner," Nick tells her, which is in my estimation the single most romantic thing one human can say to another.

But things get weird when they head back to the apartment. Though they've been officially dating for only thirty minutes, they're already living together—and with two more weird, needy roommates, who are acting even weirder and needier than usual. To be alone with one another, Nick and Jess decide to run away, at least temporarily.

Schmidt is understandably squirrely about his current romantic dilemma. Should he choose Cece, who called off her wedding for him, or Elizabeth, the college sweetheart he'd recently reconnected with? Of course, because this is Schmidt, he ends up breaking up with... neither of them? Surely this isn't going to end well.

For his part, Winston has started a new puzzle, an activity he is both single-mindedly obsessed with and uniquely terrible at (even though this particular model is designed for ages six and up). It turns out that Winston's colorblind, a fact his friends discover when he insists a pair of green sneakers are brown. "If you think those shoes are brown," Schmidt asks, "What color do you think you are?"

One very long drive later, Jess and Nick arrive in Mexico, glorious land of pinatas shaped like monkeys. The couple sets up a Moonrise Kingdom-style camp on a beach, spending a surprisingly blissful four days surrounded by trash and feral dogs. When the petty cash runs dry, they sneak onto the premises of a resort, where Nick is promptly tazed and arrested after threatening to strangle a child to death for a membership bracelet. You know, normal vacation stuff.

To save her new boyf from "resort jail," Jess hightails it back to L.A., bringing Schmidt, Winston, and Nick's passport back to the hotel with her. It's only then that Nick and Jess accept that, like it or not, their relationship will have to find a way to thrive within the noisy, crazy environment of 4D—after all, they're a family.