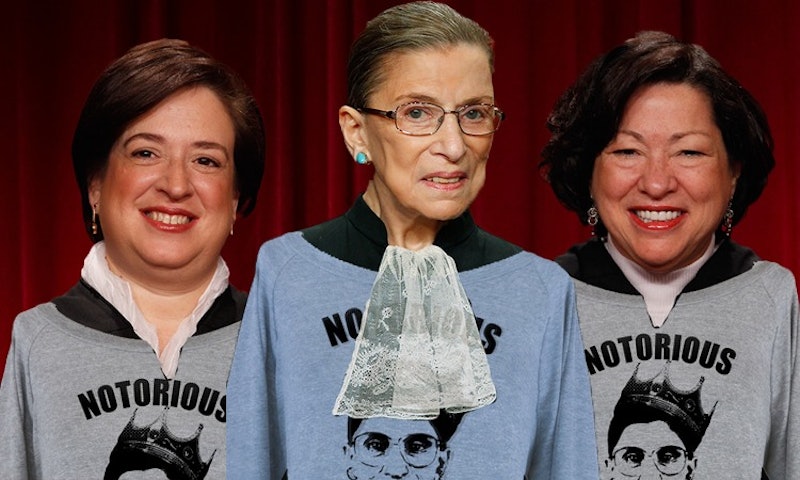 2014 was the year Ruth Bader Ginsburg and Beyonce teamed up as the perfect pair of feminist fighters, but when it comes to reproductive rights in the United States, there are still some battles to be waged. The landscape of abortion and contraceptive rights across the nation continued to alter, dramatically, with states like Texas seeing the majority of their abortion clinics closed and birth control accessed impeded. Tennessee has also begun criminalizing pregnant, drug-addicted women, while Indiana continued to arrest women who try to self-terminate their pregnancies, due to health and financial hardship. And don't forget about that little ruling favoring the religious beliefs of a craft store over the health and livelihood of its female employees.

This year may have brought us #DrHobbyLobby and his sage advice, but there's also been victories that indicate a changing tide may be on the horizon. It's also obvious that the pro-choice movement has expanded, embracing a reproductive justice framework that has been fostered for years by women of color and grassroots activists. With this framework comes a new, clearer lens that moves reproductive rights past the age-old pro-life, pro-choice debate.

As if Texas, Indiana, and Tennessee's rulings weren't frightening enough, here's a look at five other major moments, from abortion access to Ferguson, that changed the landscape of reproductive rights in the United States...

2014 will go down as the year of Hobby Lobby. In a divisive 5-4 ruling, the Supreme Court allowed closely held for-profit corporations to deny their employees healthcare coverage of several types of birth control, including the IUD and the morning-after pill, because of the owners' religious beliefs. It's the first time the Supreme Court has let private companies discriminate against their employees based on religious discrimination. According to the Center for American Progress, 23,000 Hobby Lobby employees were immediately affected by the ruling.

But that's not all: Although the Supreme Court said its ruling would only be applied to Hobby Lobby and four types of contraception, the high court quickly expanded the ruling to all types of birth control challenged by a number of other for-profit companies. In the words of dissenting Justice Ruth Bader Ginsburg, "The court, I fear, has ventured into a minefield."

And what about that Notorious RBG? She, along with her "clique" Justices Elena Kagan, Sonia Sotomayor and Stephen Breyer, stood vehemently for women's rights. Ginsburg, in particular, wrote a particularly powerful dissent that called the court out on its discrimination against women, and favoring the religious rights of for-profit companies over the rights of American employees. If there was any silver lining to be found in the Hobby Lobby ruling, it's the way women across the nation have rallied behind the justice, using her dissent as the battle cry:

Ginsburg also made this little jab, presumably at her fellow male colleagues who may be unable to understand when and why women use contraception:

Any decision to use contraceptives made by a woman covered under Hobby Lobby’s or Conestoga’s plan will not be propelled by the Government, it will be the woman’s autonomous choice, informed by the physician she consults.

In another startling blow to reproductive rights activists working on the front lines, the Supreme Court struck down a Massachusetts law that mandated a fixed 35-foot buffer zone in front of all reproductive health centers in the Commonwealth. The law was created to protect clinic patients and employees from potentially dangerous anti-abortion activists, who have targeted Massachusetts abortion clinics in the past. In the most famous case, a gunman shot and killed several clinic employees at two separate Brookline clinics in 1994.

But the high court, in an unanimous ruling, saw it as a barrier to protesters who wanted to practice their First Amendment, free-speech rights. Now, the "sidewalk counselors" who hold up outside the clinics, trying to discourage patients from entering, can walk freely up to the building — but they can't block the entrances or exits, thanks to existing federal laws.

So, what did this ruling mean for the other states and municipalities that also had buffer zone legislation on the books? Fortunately, the Supreme Court ruling didn't eradicate all abortion-clinic buffer zones, but many were placed in jeopardy. The city of Portland, Maine, had to repeal its 39-foot buffer zone in early July, while Madison, Wisconsin, and Burlington, Vermont, stopped enforcing their buffer zones.

Meanwhile, an anti-abortion organization has filed a lawsuit challenging New Hampshire's newly passed 25-foot buffer zone. A federal judge has placed the lawsuit on hold, and the buffer zone has yet to be enforced — possibly setting up a new abortion rights challenge in 2015.

Women in Colorado and North Dakota had a lot riding on the 2014 midterm elections. Both states had a referendum on their ballots proposing "personhood" for fetuses at any stage of development. Although supporters of the two amendments claimed the measures weren't that harsh, opponents warned that they would most likely ban abortion and several types of contraception.

This was the third time Colorado tried passing a voter-approved personhood initiative — and consequently, the third time it failed to gain support among voters. Similarly, North Dakota’s “Life Begins at Conception” Measure 1 was defeated by 64 percent of the vote.

In 2014, researchers at the Guttmacher Institute revealed that teen pregnancy has decreased dramatically over the last two decades. The pregnancy rate for teens between the ages of 15 to 19 fell 57.4 per 1,000 women in 2010 — marking a 51 percent decline since 1990. The researchers found some other good news, too: The teen abortion rate fell to 14.7 per 1,000 women in 2010, indicating a staggering 66 percent decline since 1988.

So what's driving this trend? The Guttmacher researchers say it's most likely attributed to new uses of birth control and increased sexual education:

There is evidence that contraceptive practices are improving among older teens: A recent study found that the proportion of 18–19-year-old women reporting use of long-acting reversible contraceptive methods tripled between 2007 and 2009, and promotion and acceptance of these methods for teens and young adult women has increased. Contraceptive use may also be associated with the large decline in the pregnancy rate among sexually experienced teens.

A study on abortion trends, released in November, also found that the abortion rate among women of all ages dropped to a historic low in 2011. Again, the CDC researchers concluded that the low rate was probably due to women using more effective methods of birth control, and using careful family planning in light of the recent recession.

So to recap: Birth control works when used with the proper information.

5. "Hands Up, Don't Shoot" Is A Reproductive Justice Issue

2014 will be remembered as the dawn of a new civil rights era. The deaths of Michael Brown, an 18-year-old high school graduate from Ferguson, Missouri, Eric Garner, a 43-year-old father of six, and Tamir Rice, a 12-year-old from Cleveland, have sparked discussion, debates and massive protests on race relations, racial profiling and police brutality in the United States. But the Ferguson and #BlackLivesMatter movements have also highlighted the effects of these injustices on what it's like to be a woman of color raising children in these targeted communities. Police brutality, women of color activists say, is a reproductive justice issue.

We look at the right to have a child, to not have a child, and to parent your child in a safe and sustainable community free from violence. If you aren’t safe in your community because you’re racially profiled by the police, and you can’t walk from your home to a clinic or to a hospital to access the services you need, then that’s not really a full articulation of reproductive justice.

Women of color are already more likely to face barriers trying to access affordable birth control and abortion care. But according to RH Reality Check senior legal analyst Imani Gandy, women of color face much more hardship once they give birth and start raising families:

Black women are raising children and fearing that their children are going to be gunned down in the street. That affects their ability to parent freely,” continued Gandy. “That’s a real hardship for a lot of people. You have to sit down and tell your nine-year old this is how you have to interact with the police. That’s stressful.