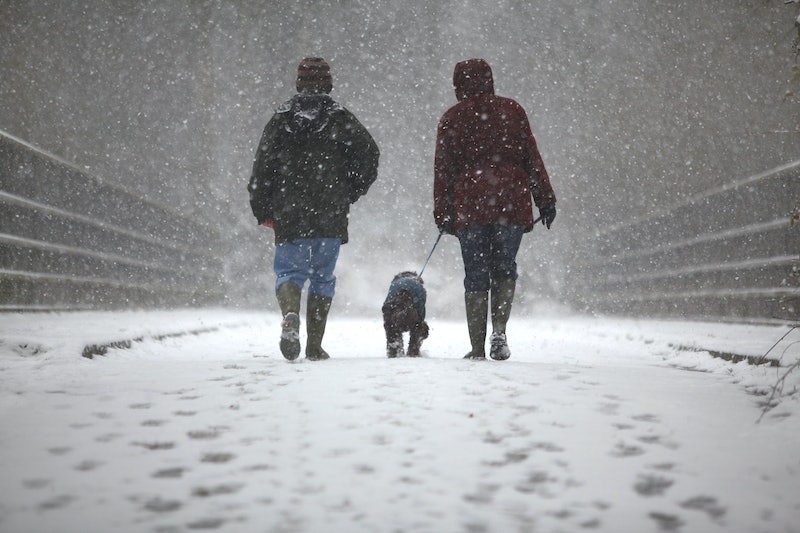 The healthiest time for your relationship? Holiday time, of course. Turns out we don't need mistletoe as an excuse to snog under the tree; as reported by The Telegraph, people conceive more babies during the winter months.

As we all know, a healthy sex life means a happier relationship; our body's happy chemical, oxytocin, is released every time we get rowdy underneath the Christmas tree, bonding couples in a way that no other activity can. Winter has a somewhat infamous reputation for being the season of stress, its frost-bitten nights and crisp days chock full of family arguments, the pressure to come up with a great gift, and a whole lot of emotional eating. Nevertheless, we seem to be connecting just fine on a physical level.

Interestingly enough, sperm is at its strongest in the winter and spring months. Pair that up with the fact that twice as many condoms are sold the week preceding Christmas than the week after Santa comes to visit and the theory that many people inadvertently screw up birth control due to the overly enthusiastic partaking of holiday festivities: boom, you've got a bébé.

I can see it now. Our heroine would be all snuggled up in her cozy winter cottage, drooling over an array of seasonally-themed, carefully chosen fluffy pastries, watching the snow fall softly over the vast expanse of her beautifully kept horse ranch. She'd just be getting up to warm a croissant when Prince Charming shows up, snow-crusted, with Chipotle or, you know, something like that.

Point being, a nice snuggly night in is the best aphrodisiac; couples seem to be much more apt to get down when there's a general feeling of ease and relaxation. Seasons like summer are fun, but they're not as much about relationship bonding. They're more about bikinis and vodka and dreading fall. But I digress.

In a survey by online sex guide Good In Bed, 36 percent of participants cited winter holidays as the sexiest, just behind Valentine's Day. Shortly after came New Year's Eve, another traditionally chilly day. The survey also reflected that respondents were far more likely to have sex while on vacation.

So, what does all this tell us? The short shorts of summers might be visually enticing but it's the feeling we get in our hearts, not our loins, that serves as the best aphrodisiac.

More like this
16 Valentine’s Day Quotes About Chocolate That Will Make You Hungry
By Emma Cueto
21 Galentine’s Day Memes To Celebrate Your Best Friends
By Meghan Bassett and Mia Mercado
23 Super Sweet Things To Write In A Valentine's Day Card
By Karen Belz and Lexi Inks
17 Valentine's Day Tips For New Couples, Straight From Relationship Experts
By Carolyn Steber
Get Even More From Bustle — Sign Up For The Newsletter
From hair trends to relationship advice, our daily newsletter has everything you need to sound like a person who’s on TikTok, even if you aren’t.