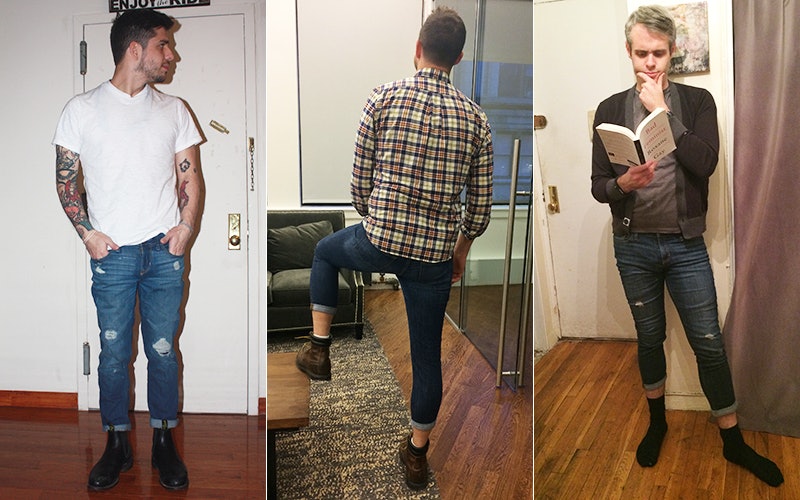 In the land of women's denim, there has been, in my opinion, no invention more brilliant than the so-called boyfriend jean. An answer to the super-skinny cut that suffocated our calves through the early aughts, slouchy-fit pants gave us all the freedom to do our lunchtime high-kicks without any looming fear of ripping the crotch. The fabric is softer, with a lived in feel made to mimic, well, borrowing your boyfriend's favorite pair of jeans — except more flattering, since these were actually made for women and their curves.

While lots of ladies embraced the boyfriend jean, it is one of those trends that tends to get a man repelling reputation. Personally, I think they exude the same, laid-back sexiness that can come from how gorgeous a girl can look relaxing in sweats and a tee shirt, but the distressed details and loose fit had some guys longing for the particularly, ehrm, asset enhancing features of the skinny jean. (Yes, you have full permission to commence eye-rolling.)

So, in an attempt to get our SOs to understand our obsession with this new style of denim (and see how close they really were to actual men’s pants), I bullied eight guys I know into putting on some boyfriend jeans. You're welcome, everyone.

I suppose I had an advantage in this experiment, since Franco and I are the same size, waist-wise. So these, like, actually fit him, IMO. He disagreed, saying, "Well, this looks like I did in high school," and "They're just so f*cking tight!!" The biggest struggle came when we had to take them off, however:

*While trying desperately to pull them off over his feet* "WHY WOULD SOMEONE MAKE PANTS THAT ARE TRAPS?!" I don't know, Franco. Because the patriarchy, probably.

"They don't feel like denim," he complained. "The pockets are so short." I KNOW, DUDE. Being a girl is really effing hard.

Franco also had some vague qualms with the idea of these being marketed as "boyfriend fit," considering how completely unlike men's jeans they are. But no one was more baffled by the style than...

Despite his relaxed appearance in this photo, Patrick was rather distressed by most aspects of the boyfriend jeans. First, the length. He thought they were just too short because he's a dude, until he realized the woman whose jeans he was trying on was actually taller than him. "Do you think there are many guys who go for the cropped look outside Williamsburg[, Brooklyn]?" he wondered.

Speaking of the length, the fact that many boyfriend jeans come with a pre-stitched cuff was a travesty in his opinion.

"And what is this?!" Patrick demanded, "They're attached?! That's ridiculous!" However, the cuff was quickly forgotten when he stood up and tried to casually pose with his hands in his pockets.

"Oh," he exclaimed, with wide eyes and a dropped jaw. "These? These are WAY too short." Rather than the fit or the silly distressed details, the tiny pockets women suffer through on a daily basis were the thing guys were appalled with across the board.

It wasn't all bad for Patrick, however. The size was actually a bit bigger than he usually wears, so he appreciated having a little extra room. "It's nice to be in baggy jeans again," he said. "You have to be in skinny jeans now."

Plus, the fabric was softer than the tough denim he's used to. "I find that when I sit in my jeans, the seams dig in," Patrick remarked. "These don't do that, though I suppose that makes them less durable."

To get David to agree to participate, we had to bribe him with a homemade grilled cheese. Seems fair.

His main reaction: "These are... so tight?" Yeah, but look how great your butt looks in it, David!

Brian wins for most succinct-yet-accurate commentary ("I feel like Huckleberry Finn"), as well as best pose.

"I don't know what to say. They're girls pants and they're too small on me. I'm going to take them off now." Fair, Alex. Thanks for playing, though.

Not everyone was grumpy about trying on the jeans — Ryan volunteered without any outside pressure. "Obviously, they're a little on the short side," he sagely noted.

Aside from the length, however, Ryan was pleased with the jeans. "They're very comfortable, kind of like sweatpants," he said. "I feel like I could take a nap in them!"

Unlike most of the other dudes who gave this little experiment a go, Peter, "didn't mind all the holes." The only thing that really stood out to him? The length, of course.

Sam was pretty much on board with Ryan and Peter's verdicts, declaring, "They feel wonderful! If I could only button them, I'd wear them all the time."

So there you have it. Ladies may get softer fabric for their jeans, but dudes get all the pocket space. Nobody ever said life was fair.