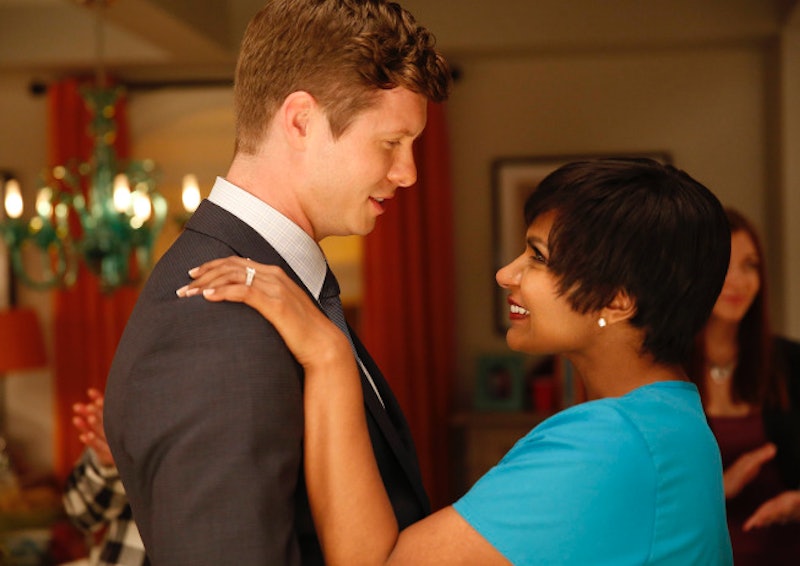 Let the countdown to the break-up begin. On The Mindy Project, Mindy Kaling's Dr. L has known Casey (Anders Holm) for just five episodes when she agrees to go to Haiti with him, leaving her life and her practice behind. It was a whirlwind romance, but rather than getting swept up, I just felt sick. In the season premiere of the series, Mindy has returned to New York with the idea that she'll make long distance with Casey work, but frankly, I can't wait for her to cut the chord.

This comes as no insult to Holm, who does what he can with his character. It's all about the creation of a character we're supposed to believe Mindy sees a future with, but who, in reality, is just about the worst person for her. True, it's best that we don't adore Casey; we already know that Mindy has other suitors (like guest stars Timothy Olyphant and Glenn Howerton) on the way and the series has been bashing us over the head with her clear affection for Danny (Chris Messina). But there's an art to creating a long-term love interest as an obstacle without making them unbearable. Take for example, Karen Filippelli (Rashida Jones) on The Office, the series Kaling used to write for. Karen was infinitely likable and it made sense that Jim was enamored, even as she kept he and Pam apart. Is it too much to ask that Casey occupy a similar space?

Certainly not. While the series is dropping "hints" of Mindy's incompatibility with Casey, there's a clear swath of what's supposed to be his charm over everything. However, there's not a single moment on this show that makes it feel like these two love each other so much they can overcome obstacles like Casey peeing on Mindy's dress and him trying to have sex with her while she's clearly suffering from some severe pain in their Haiti love nest.

True, with love comes the ability to handle the ugly moments in life — like that time Casey accidentally flicked the food from his floss into her eye and then knocked her glasses off her face with his penis — but only when there's some sort of base of believable affection and chemistry. And no, Holm's over-the-top kissy faces and repetition of "I love you, baby" aren't doing the trick.

But if it weren't for the lack of chemistry, there would be an even greater issue still. Perhaps this can be blamed on Kaling's self-professed love of the rom-com, but Casey is something of a dude-bro in sweet, unassuming guy clothing — the typical terrible match blinding the heroine and keeping her from her true destiny. Casey is, unfortunately, less like Aidan — Carrie's mismatched, yet lovely boyfriend on Sex and the City — and leaning far closer to cartoonishly bad fiancés like Glenn in The Wedding Singer. He consistently behaves as if Mindy's textbook girly tendencies (her penchant for rom-coms, her distaste for nature, her voracious need for celebrity gossip) are something to be corrected, when the great thing about The Mindy Project is that it makes "girly" traits something to be proud of.

Yes, I like to pretend my life is a Sandra Bullock movie sometimes, is that something I need to hide for fear that it comes across as too girlish and silly? Hell no. When the show first started, it was practically calling out, saying, "Let that sparkly flag fly high, ladies. You are who you are, and there's nothing wrong with that." Suddenly, in comes someone tall and handsome and it's okay that he uses his ever-condescending tone to coax Mindy into behaviors that he values. There are no narrative cues that we're supposed to be appalled by this, just mildly annoyed so that when the break-up comes we're ready to move on at break-neck speed.

Well, I for one, am done with the Casey-Mindy experiment. While Tuesday's episode marked the first time Casey seemed to actually understand his fiancé, knowing that she needed to make the bacon to pay for the princess wedding he knows she wants, it's too little too late for me. Add to that the fact that Casey's proposal started with the notion that he never thought their relationship would go anywhere because of "your body type" (pure, unadulterated romance, this is not), and the nail is firmly hammered into the coffin.

The real question here isn't why, narratively speaking, we need a character like Casey to act as the catalyst for Mindy's upcoming string of male companions, but rather why the writers couldn't give her someone better. Sure, Mindy was sort of rebounding from Josh, the cheater, when she met Casey, so it's understandable that she fell hard and fast, but it's mind-boggling as to why she would stay with a man who so clearly finds his ideas superior to hers. She may love the Kardashians and gawk uncontrollably in the presence of James Franco, but Mindy has never given us any indication that she's not strong and secure in her personality. Hell, when she went on her camping double-date with Danny, Casey, Christina, and Morgan, she's the one who hopped to put out the fire on Morgan's clothes.

She's smart (hello, she's a doctor), successful (I dreamed a dream that I stepped foot in an apartment that perfect once), resolute in her ideas (yes, we should stop saying "girl crush") funny, sweet, caring — need I go on? Mindy is great. Does she really deserve a guy who's whole purpose is to try to contort her into some person she's clearly not? I know the break-up is coming soon, but let it come swiftly and let Mindy be the one to realize Casey needs to go.

Mindy is a beautiful warrior of a woman who deserves a better man. And I'm pretty sure Beyoncé Pad Thai would back me up on this.

More like this
Kaley Cuoco Was Set Up With Her New Boyfriend Tom Pelphrey By Her Manager
By Hugh McIntyre and Jake Viswanath
What’s New On Netflix: Ana De Armas’ 'Blonde' & A Nick Kroll Special
By Arya Roshanian
'Elite' Season 6 Is Arriving Sooner Than You Think
By Gretchen Smail and Grace Wehniainen
The 'Reasonable Doubt' Cast Includes A 'Save The Last Dance' Reunion
By Grace Wehniainen
Get Even More From Bustle — Sign Up For The Newsletter