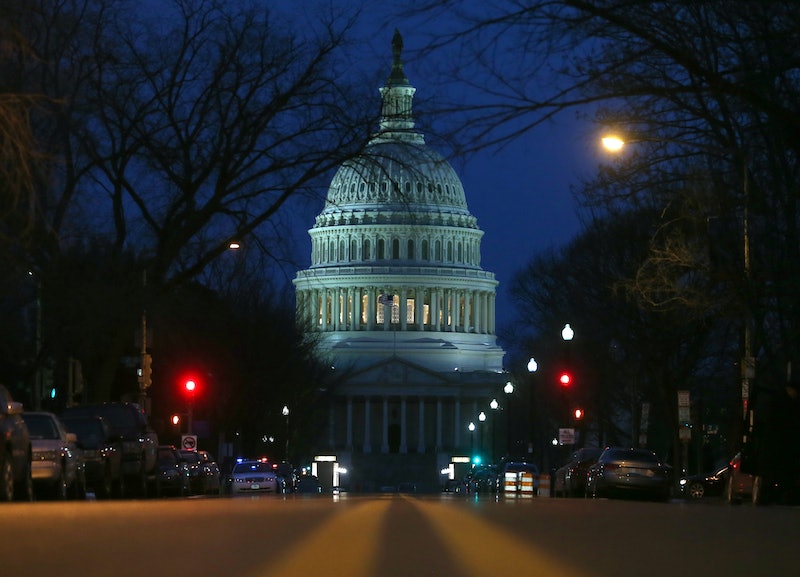 The 113th Congress has been one of the least effective legislative bodies in modern history, but on Tuesday night, they narrowly managed to prevent a government shutdown by agreeing upon a $1.1 trillion spending bill. This hard fought agreement will allow the government to continue its operations at least through September 2015, and while the official vote has yet to take place, leaders from both parties expect it to make it through the two chambers without issue. The lengthy agreement, 1,603 pages to be exact, devotes $5.4 billion to fight Ebola, and also grants provisions to address the growing threat of the Islamic State. Conspicuously absent from the agreement, however, are funds for the Affordable Care Act and the Internal Revenue Service. The Environmental Protection Agency also saw its funding cut.

At a press conference on Tuesday, Senate Majority Leader Harry M. Reid (D-NV) noted, "There’s no reason the government should shut down. And we’re ready to pass a year-long spending bill to take care of this." Despite the congressional habit of dragging its feet, Senator John Thune (R-SD) pointed out that the holiday season made even the most ornery of lawmakers eager for some sort of compromise. Said Thune, "There is something about legislative institutions that don’t function until there is a hard deadline and usually around here that hard deadline is Christmas Day. Things don’t get done until there’s a crisis, and that crisis is upon us."

The government is officially set to run out of money on Thursday, and with the House vote not expected until the day of the deadline, it seems likely that Congress will have to pass a stopgap spending bill in the meantime in order to prevent the government from defaulting. This, of course, seems to remain in line with Congress' record of ceaseless, unproductive bickering at the expense of the American people. Despite the fact that the bipartisan agreement was spearheaded by the GOP-led House Appropriations Committee, some Republicans have indicated that they will not vote for the bill. Rep. Mike Mulvaney (R-SC), for one, told Fox News, "I don’t think we've proven to people who just re-elected us that we’re doing everything that we can. Now we’re going to fund the emperor (President Obama) without putting up a fight? That’s hard for me to swallow."

Similar dissent seems present amongst Republicans in the Senate, with Tea Party favorites like Senators Ted Cruz (R-TX), Mike Lee (R-UT) and Jeff Sessions (R-AL) expected to make noise in opposition to the bill. Even as the Republicans control both chambers of Congress, the intra-party divide between the moderate and more extreme right has already begun to show cracks in the party's veneer.

The bill, which is designed to provide a clean, or at least new slate for the 114th Congress, includes nearly $74 billion for wars and other overseas operations, with more than half of the trillion dollar amount ($521 billion) devoted to the military and defense. Another $492 billion has been set aside for other federal agencies, though the EPA and the IRS are to lose $60 million and $345.6 million, respectively. Another GOP victory could be seen in the decision to block marijuana sales in the nation's capital, though residents of the city will still be allowed to possess up to two ounces of the drug and cultivate the plant at home, as per last month's voter-approved law.

Reid, expressing what is likely the sentiment of many on the left, said Tuesday, "The District of Columbia should do what they want to do," but acknowledged that changing this particular provision would likely prove difficult before Thursday.

Ultimately, the agreement has been described by a Democratic aide as a "split decision," one that isn't exactly desirable by either Republicans or Democrats. But regardless, Sen. Barbara A. Mikulski (D-MD) and Rep. Harold Rogers (R-KY), the two heads of the Senate and House Appropriations committees, called it a "fair deal." In a joint statement, the lawmakers said,

This bill fulfills our constitutional duty to fund the government, preventing damage from shutdown politics that are bad for the economy, cost jobs and hurt middle class families. While not everyone got everything they wanted, such compromises must be made in a divided government. These are the tough choices that we must make to govern responsibly and do what the American people sent us here to do.

Key policy debates, including those over hot-button issues like immigration, remain part of the mix in the ongoing negotiations over the agreement, but for now, it seems as though the country can breathe a collective sigh of relief, and hope for a little bit of cooperation come Thursday.