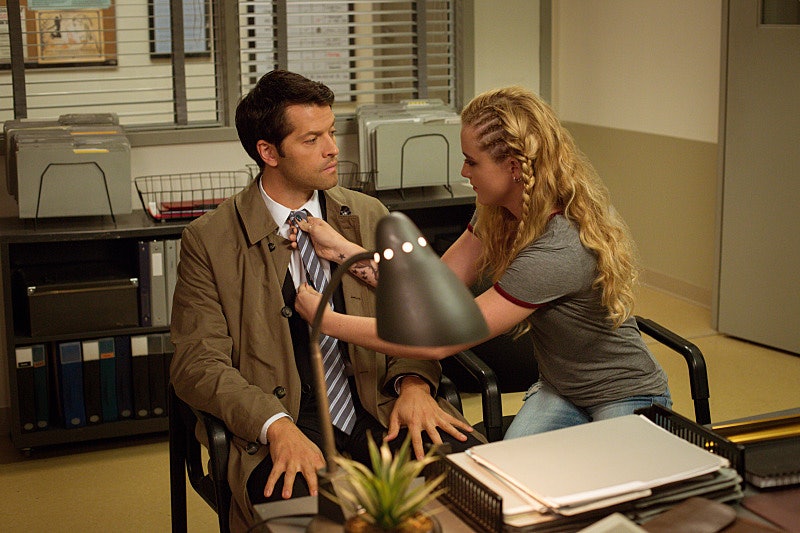 Team Free Will could be getting a new addition to their group at the start of the new year. In Tuesday night's midseason finale of Supernatural "The Things We Left Behind," Castiel attempted to reconnect with the daughter of his vessel Jimmy after his fellow angel friend Hannah realized that she needed to leave her vessel and return to Heaven, as she was clearly getting confused by her feelings caused by the human she's possessing, Caroline. Castiel decides to Google his vessel's name and comes across Claire, Jimmy's daughter, who is clearly going through a troubling period after her the loss of her father to the angels and the abandonment of her mother. The episode ends before Claire and Castiel can come to a decision about her future, but it begs the question: Could Supernatural return with Claire tagging along on Castiel's adventures?

Claire and Castiel reunite as the Novack daughter is promptly getting arrested for shoplifting and placed in a group home until Castiel can break her out. She's none too happy to see the angel overtaking her father, but knows he's her best bet to freedom once again. So she convinces him that he owes her enough to bust her out and then later runs away from him, back to her makeshift family headed by a man who basically uses his "kids" to steal money for him to pay back a loan shark.

Castiel, with the help of Dean and Sam, is able to find Claire and save her from the loan shark thugs. Along the way, Claire and Castiel actually grow closer together as Claire notices that Castiel has changed dramatically since the last time they met. After Claire faces an attempted sexual assault at the hands of the main loan shark thug, Castiel saves the day and the Winchesters have his back, though the rescue attempts ends with a violent misstep when Dean's violent nature comes out thanks to his mark of Cain and he slaughters all of the thugs. So while it's obvious Team Free Will will have their hands full trying to help Dean through his resurfacing monstrous side, will Castiel use Claire to take on the cases the Winchesters usually handle together?

To be honest, probably not. He will probably want to make sure that Claire is safe and away from any dangerous kind of life, as he is clearly guilty for her journey since his possession of Jimmy (though voluntary) set in motion all of the negative events that occurred in Claire's life.

But the real question is, will Claire want to stay away? It seems as though if she tries to go back to fending for herself, she'll be placed back in the group home until she turns 18, and that's clearly something she doesn't want, despite the group home leader being a seemingly nice and fair woman. No, what Claire needs is some direction, discipline, and some semblance of a family. And those are three things Castiel could provide if he'd allow himself to do so. Sure, Hannah worried Castiel when she said that humanity was deterring them from their angelic duties, but at this point, isn't Castiel more human than angel? And isn't that one of the reasons we love him so much?