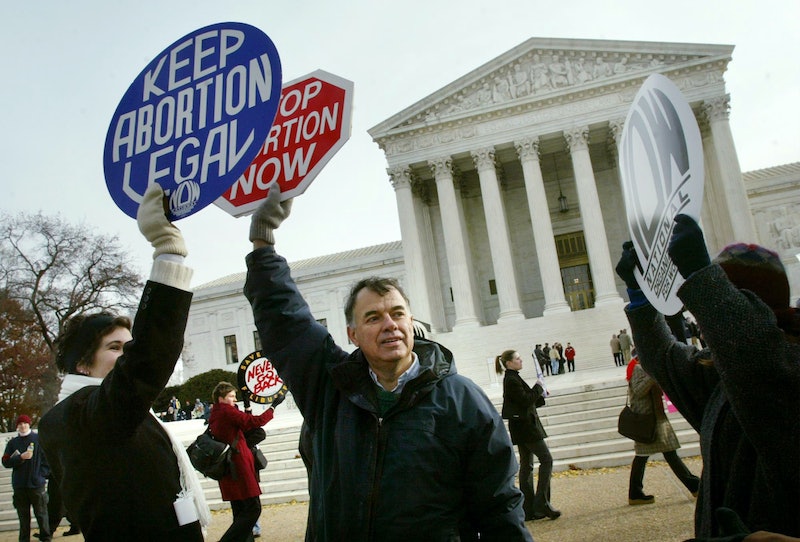 One of the biggest talking points of the Right's crusade to impose abortion restrictions is the valiant effort to "protect women." Despite the credible sources that have refuted this rhetoric, anti-abortion tactics rely heavily on the idea that the procedure is a real risk for pregnant women. In one of the most comprehensive studies that has ever been released, however, researchers prove yet again that abortion complications are extremely rare and the procedure is extremely safe.

The study, which was released Monday in Obstetrics & Gynecology, concluded that complications from abortions occur less than a quarter of one percent of the time. Those numbers come from data collected from nearly 55,000 women who obtained abortions under California's Medicaid program, Medi-Cal. In the first six weeks after the procedure, only 126 of the cases needed any kind of follow-up care, including surgery, a blood transfusion, and other conditions that required hospitalization. The rate of minor complications, 2.1 percent, was much higher, but as the study points out, it is still much lower than that of childbirth.

So does that mean that we'll stop hearing anti-chatter about the perils of abortion? Well, don't get your hopes up. Although not to the scale of this latest study, there has been abundant evidence that abortion is unequivocally safe. None of this seems to faze the right. Take, for example, this passage under "Is Abortion Safe?" on the National Right to Life's site (it has citations just so you understand how credible it is):

The Abortion Surveillance Branch of the Centers for Disease Control (CDC) maintains that induced abortion is safer than childbirth [75] and that the serious complication rate is less than one percent. [76] Yet there is no agreement among investigators as to what constitutes a major complication and no real national system for the reporting these kind of statistics, [77] making the accuracy of such assertions questionable.

Because you clearly can't trust those Commie scientists at the CDC! The reference about national reporting statistics, by the way, comes from a paper called "Demographic and Public Health Experience with Legal Abortion: 1973–1980," which was written in 1986.

Do you want to hear a really scary fact, conservatives? In an exhaustive publication on abortion published by the World Health Organization (more Commies, I'm sure), it shows that the restrictions put on abortion do not affect the likelihood that a woman will seek to terminate a pregnancy. That means that women are turning to actually unsafe abortion procedures, which cause approximately 47,000 deaths per year.

But facts are, you know, just like, factual and not actual, amirite, right?!

If the knights of anti-abortion abandoned the fight against reason, they would also have to abandon one of the most effective legislative tactics they've employed — TRAP laws. TRAP laws, or Targeted Regulation of Abortion Providers, scare state legislators into believing that the abortion centers are dimly lit halls of sin and seek to send providers through absurd hoops to stay afloat. Many state bills have required hospital-admitting privileges, structural standards equivalent to that of ambulatory surgical centers, and specific maximum distances that abortion providers can be from hospitals. All in all, the Guttmacher Institute says that 24 states have laws on the books that go above and beyond the care necessary for abortion care. Yet, the litany of legislation marches on.

So, no. Although we can yet rest easy again knowing that (most of us) have safe access to abortion, I doubt that this highly useful study will be taken seriously by the people who need it most.