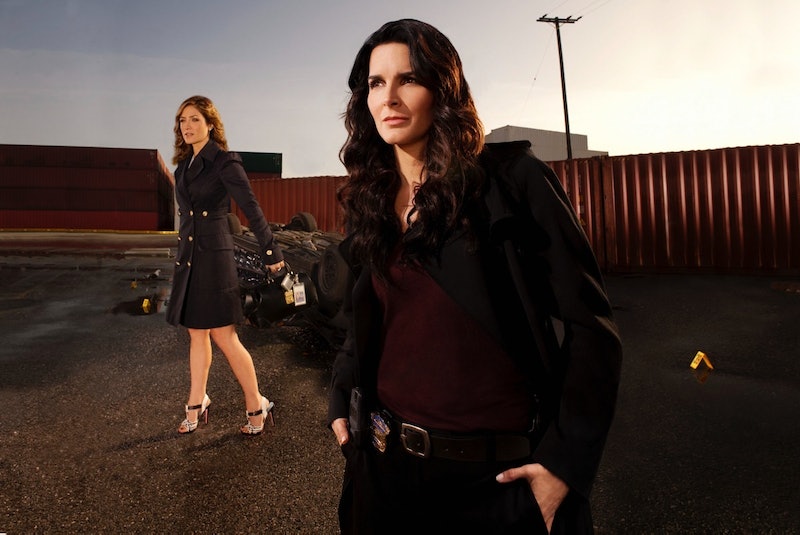 Good news for everyone who loves hilarious, witty shows starring strong female characters who are not well-written and well-rounded, but also badass: According to EW, TNT's crime show about a female police detective and a female medical examiner that are besties who solve murders together, Rizzoli & Isles , has been renewed for season 6 — before season 5 has even gone to air. Now, in the world of cable television, that's how you know you've got a winner on your hands.

Season 6 will consist of 18 episodes total, and will premiere sometime next summer. In the mean time, season 5 will premiere as planned on Feb. 17, 2015, and will hopefully follow up season 4's record amount of viewers that made the series no. 1 on basic cable when it aired this past summer.

If you've never seen Rizzoli & Isles, take this as your cue: It's worth your time. Starring Angie Harmon as police detective Jane Rizzoli, and Sasha Alexander as her bestie, medical examiner Maura Isles, the series basically follows the two of them as they solve murders and be best buddies. There really aren't enough female buddy cop duos around, ever, and luckily Rizzoli & Isles does it right — after all, there's a reason it's just nabbed early season 6 renewal!

More like this
Does The 'Echoes' Ending Mean There Will Be A Season 2?
By Kadin Burnett
An Ultimate Guide To The Music Of 'Rap Sh!t'
By Brad Witter
13 Daenerys Targaryen Quotes To Get You Fired Up For 'House Of The Dragon'
By Marina Watts
Here’s How 'House Of The Dragon' Diverges From The Book’s Timeline
By Allyson Johnson
Get Even More From Bustle — Sign Up For The Newsletter