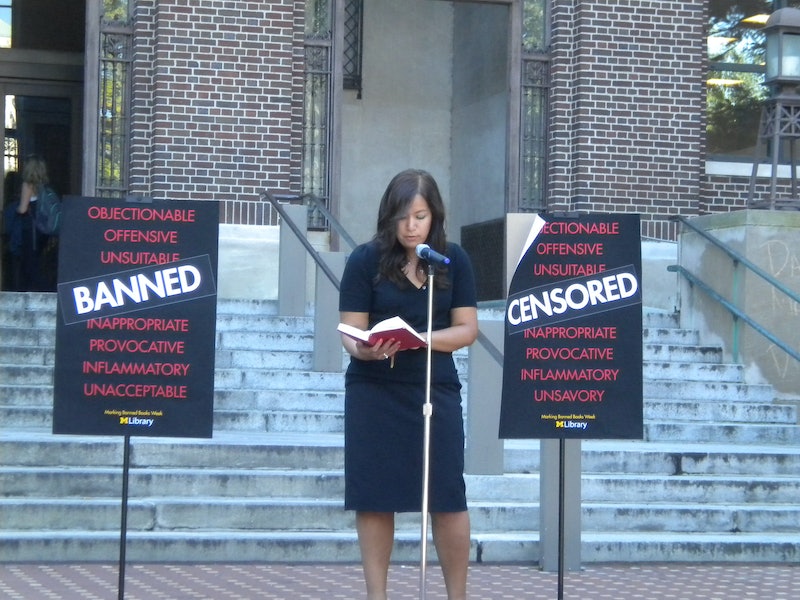 Banned Book Week should be one of those things that is well-established enough not to need an explanation, but here goes: this chunk of the calendar is one week a year during which books that were formerly banned in schools or libraries (or, occasionally, still are) are read and celebrated. These books are generally the kind that disrupt the status quo and talk about difficult issues. Banned Books Week is not a time to actually ban books, least of all ones that can help alienated, struggling students feel a little less alone.

So, on the heels of next week's celebratory occasion, imagine my dismay hearing about two schools that seem to be fêting Banned Books Week literally.

Virginia's Cumberland Middle School had originally invited author Meg Medina to come speak about her novel, Yaqui Delgado Wants to Kick Your Ass, during an anti-bullying event. Administrators later capitulated that she could not show the book cover or say the title. According to Medina, her appearance was cancelled after she suggested the use of parental opt-out notes.

Did we mention that this was a book about bullying? To be talked about during an anti-bullying event? And that bullies rarely use “appropriate” language? As Medina notes in an interview with WRIC, "There's nothing in the cover that doesn't reflect the essence of the book which is these are the horrible things that are happening. These are the ways that we're hurting each other.”

At the same time, in the Anoka-Hennepin school district in Minnesota (the same congressional district of Michele Bachmann fame, if we're playing Fun Fact o' the Day) is attempting to ban Eleanor and Park, a YA romance by author Rainbow Rowell. The book was selected by librarians to be part of a Rock the Read summer reading program, so Rowell was invited to speak.

That is, until parents of a 15-year-old Anoka-Hennepin student made an exhaustive list of every one of the 227 instances of “vile profanity” within the book. It’s worth noting that 118 of these are “the disparagement of their God and Savior though the irreverent and derogatory use of His name”, and a good chunk of the rest are, like in Yaqui Delgado, used by bullies. As Rowell says in an interview with The Toast's Mallory Ortberg:

“But it’s so bizarre to me that they’re objecting to the cursing because Eleanor and Park themselves almost never swear. I’m not anti-profanity, personally, but I use profanity in the book to show how vulgar and sometimes violent the characters’ worlds are.”

I’m not going to pretend there isn’t sexual material in Eleanor & Park (there is, and it’s all outlined in that report), but bringing in the Parents Action League and asking “Was Your Child One of the Hundreds Exposed in the Anoka-Hennepin Schools?” is nothing but alarmist, especially considering Anoka-Hennepin’s history, which features a rash of bullying-related suicides in the past few years. This is a school — more importantly, these are students — where a book about coping with bullies would do more than encourage them to read in the summer. It could help them cope.

Even if the stakes aren’t as high in other counties and schools, if Banned Book Week has taught us anything, it’s that the books we try to stop students from reading are the ones that can open their eyes the most.