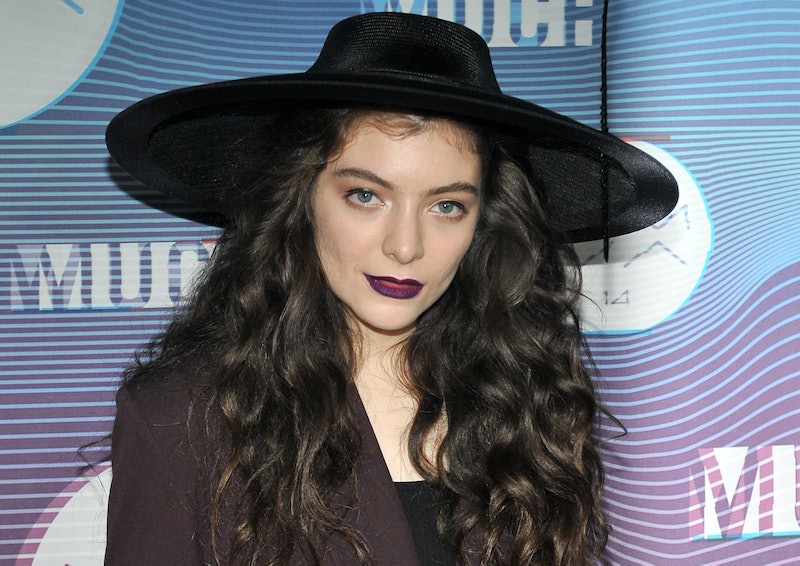 It's pretty easy to look at Lorde, the 18-year-old New Zealand singer who rose to fame at the mere age of 16 thanks to her hit song, "Royals," and feel like you're totally behind in life, because you're in your 20s and here's a teenager who's already made it in the music industry before she can even legally drink. But hey, let's be real: Lorde deserves it! She's got a killer voice, amazing lyric-writing capabilities, and, a badass sense of style for a teen — not to mention, more awards at her young age than I can even count. And now, it seems she might be able to add one more award to her lengthening list: Golden Globe winner. Lorde's song "Yellow Flicker Beat" from The Hunger Games: Mockingjay Pt 1 earned the young pop queen her first Golden Globe nom, making her one of the youngest Golden Globe nominees ever. (For the record, the youngest star to actually win a Golden Globe is Ricky Schroder, at 9 years old, for The Champ.)

Gotta say, I am not one bit surprised by this nomination, because, like I said, Lorde is talented and deserves all the praise in the world. However, the idea of her winning this award has got me thinking: Generally, the Golden Globes can be seen as a sort of primer for what to expect at the Oscars in terms of the nominee list — so, does this mean that Lorde could be nabbing an Oscar nom next year for her Hunger Games track in addition to this Golden Globes honor?

It definitely wouldn't be the first time we've seen it before: For instance, back in 2012, Adele's song for the James Bond flick Skyfall — which was also titled "Skyfall" — nabbed a Golden Globe nomination (and subsequent win) in the Best Original Song category, before going on to nab an Oscar win as well. And, in 2009, the same thing happened with Ryan Bingham's track "The Weary Kind" for Crazy Heart: A Golden Globe nomination and win, followed by an Oscar win shortly after.

Of course, a Golden Globe nomination doesn't always guarantee an Oscar nomination, but, the point is, it can be taken as a good indicator of what could happen. And, of course, if anyone's going to be the person to conquer odds like that, it's definitely Lorde.