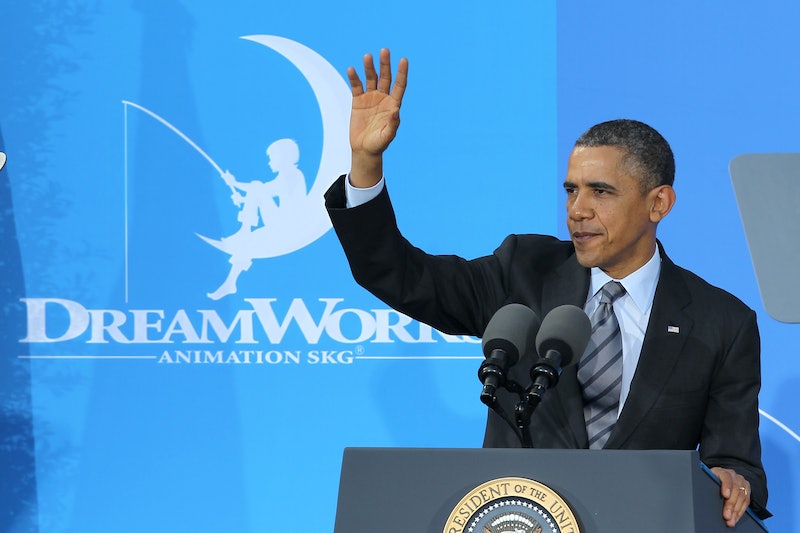 The massive hack on Sony has brought us some of the greatest entertainment of the year: Sony Pictures Chairwoman Amy Pascal and veteran producer Scott Rudin's comical e-mail showdown over the ill-fated Jobs movie. There's even cameos from David Fincher, playing the snarky BFF; Leonardo DiCaprio's somewhat desperate agent; Michael Fassbender's private parts; and notorious agent Ari Emmanuel (a.k.a. Jeremy Piven in Entourage). On Wednesday, another trove of emails between Rudin and Pascal emerged, this time discussing President Obama's favorite movie. It must be Django Unchained, right?

BuzzFeed has the latest batch of emails, which may be even more embarrassing than Pascal's "why are u punishing me" plea. (In case you need a refresher, Pascal eventually lost the long-anticipated Jobs movie to Universal.)

In this latest round of Hollywood insider information, Pascal asked Rudin, "What should I ask the president at this stupid Jeffrey breakfast?" Jeffrey is Jeffrey Katzenberg, current CEO of DreamWorks Animation, which hosted Obama in November 2013. There, Obama made a pandering speech to Hollywood about jobs and the economy.

According to BuzzFeed News, here's how the rest of e-mail correspondence played out:

Rudin: “Would he [Obama] like to finance some movies.”

Pascal: “I doubt it. Should I ask him if he liked DJANGO?”

Yeesh, Pascal and Rudin, I think we get the not-so-funny racist joke already. Unfortunately, it didn't stop there (though it really should have stopped at, "What should I ask the president"). Rudin had one more response: "Ride-along. I bet he likes Kevin Hart."

On Thursday, Rudin issued an apology for his racially charged statements, admitting they were "insensitive" and "thoughtless." However, Pascal has yet to make a public statement.

Private emails between friends and colleagues written in haste and without much thought or sensitivity, even when the content of them is meant to be in jest, can result in offense where none was intended. I made a series of remarks that were meant only to be funny, but in the cold light of day, they are in fact thoughtless and insensitive — and not funny at all. To anybody I’ve offended, I’m profoundly and deeply sorry, and I regret and apologize for any injury they might have caused.

When it comes to Obama's favorite movies, the two Hollywood power players couldn't be further from reality. While on the campaign trail in 2008, Obama listed The Godfather as his favorite movie, with The Godfather II as a close second. His third favorite movie? The David Lean epic Lawrence of Arabia. These really aren't left-field movie picks, especially considering The Godfather routinely tops "best of" rankings.

It's OK, Obama. Laugh it off. You secretly know that television is better than film these days, The Wire is "one best shows of all time," and Omar is greater than Don Vito Corleone.

And as for that Jobs movie debacle, where Rudin called Angelina Jolie an egomaniac and producer (and daughter of Oracle founder) Megan Ellison a "bipolar lunatic." Well, Hollywood players and celebrities seem to be having some fun with it.

More like this
What Is Barack Obama’s Net Worth? He Makes *Way* More Now As An Ex-President
By Hugh McIntyre
10 Times Diana & Meghan Spoke Similarly On The Royal Family
By Sophie McEvoy
Photos Of Boris Johnson Drinking At A Downing Street Lockdown Party Have Surfaced
By Bustle UK
How The City Healed Five Years On From The Manchester Arena Attack
By Ella Glover
Get Even More From Bustle — Sign Up For The Newsletter