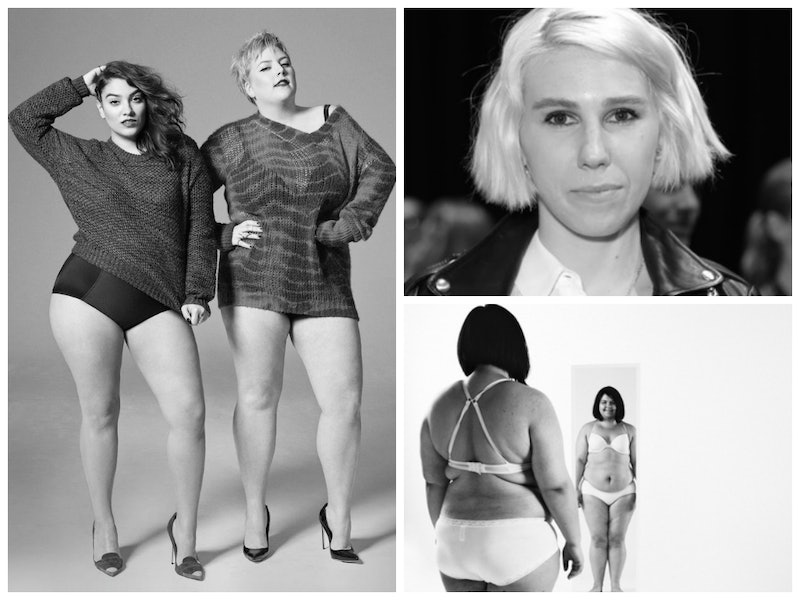 Looking back at this past year, it's starting to become quite clear that 2014 has been intense. We lost a lot of greats, from Maya Angelou to Philip Seymour Hoffman to Robin Williams. And Hobby Lobby's birth control case reified that we are not yet living in a society that grants total and equal choice to its female citizens. But in terms of admitting to the skewed and harmful body image issues that permeate much of 21st-century living, well, we've been making some strides. Some. Plus-size fashion in 2014 saw some remarkable advancements, for instance. That being said, though, the past 12 months haven't been remotely perfect when it comes to the metamorphosis from "there is only one beautiful" toward body positivity and healthier body politics. There have been highs and there have been lows. But there hasn't been a whole lot of in-between.

In conversation with ROOKIE's Tavi Gevinson, Petra Collins described why the subjects in her photographs are so often teenage girls:

"[Adolescence is] a time in your life when you're form-ing who you are as a person and so many things are happening to you. It's really scary and hectic. For me it's something very interesting to capture; there are endless possibilities. There's always pressure on teenage girls that I think has reached another extreme today, so I'm interested in talking to these girls, finding out what their lives are like and documenting it."

It's funny. I totally agree that the pressures (aesthetic and otherwise) put on young women today far exceeds that of decades past. But I also don't think it's a pressure that leaves us as we grow. That we need more positive imagery in our advertising, or our television screens, in our literature and in every aspect of our lives in irrefutable. And 2014 saw a lot of it. It saw a lot of moments that inspired and awed and perplexed in the most marvelous, and necessary, of ways. But it also saw a lot of bullshitty things, too. The latter serving to remind us that we need less "All About That Bass" and more Neringa Rekasiute's.

Through her photo project, "We. Women," Lithuanian photographer Neringa Rekasiute poses women of all shapes, sizes and colors in front of a mirror. The mirror is traditionally a source of much body dysmorphia amongst women (and men) everywhere — plaguing us with imagery that isn't really there. The photos are strong. They show the beauty in every kind of figure, and encourage us all to re-vamp our visions of beauty.

WORST: MEGHAN TRAINOR'S "ALL ABOUT THAT BASS"

OK. In theory a song that encourages body confidence amongst fuller-figured women with bigger booties than your run-of-the-mill size 2 rump has got to be a good thing. Except that in the process of doing this, Trainor ended up skinny-shaming thin women everywhere. Guys, the key to more size inclusivity is stopping all the body bashing toward all people.

Although 2014 has been a tumultuous year for Lena Dunham, her collaboration with Stylist Magazine is unforgettable. Dunham asked two of her favorite bloggers, Nadia Aboulshosn and Margie Ashcroft, to model some fall fashions. And the trio made for some serious body pos wonderment. For such a high-profile celebrity to acknowledge the need for female role models and fashion icons of all sizes was much needed.

WORST: THE "WOMEN WHO EAT ON TUBES" FACEBOOK GROUP

Yeah, so this happened in 2014. Although the "Women Who Eat On Tubes" Facebook group (packed with over 33,000 members) claims to be "observational, not judgmental," the group sparked a lot of mockery toward women who dare to eat on public transportation. "Next time you're on the tube have a look around at all the women eating. Then take a picture and send it to [us]." No matter what way you look at that, it's not OK. Women (and men) should not be targeted for, you know, subscribing to a basic part of survival.

Hayley Morris-Cafiero's "Wait Watchers" photo series aims to capture the ways in which human beings fat shame others in the day-to-day. She's been able to take shots of passerby's literally gawking at her body, whether she's been roller blading, swimming or contemplating a fashion purchase. Through her photos, we see just how cruel and real and hideous this behavior is — we see how common, and accepted it is. And we're reminded of how much still needs to change.

When Renee Zellweger attended Elle's 21st annual Women in Hollywood Awards, she dared to look a bit different than she did in Bridget Jones — a film that came out over 13 years ago. The media, and just about everyone on social media, took the opportunity to compare her to X Men characters and call for a lawsuit against her plastic surgeon. Zellweger, however, was a shining star about the whole thing, proclaiming that she was glad people thought she was unrecognizable. "Perhaps I look different. Who doesn't as they get older? Ha. But I am different. I'm happy."

Anyone who doubted that Russell Brand has evolved since his days as Aldous Snow was in for a treat when he aired his response to the media-frenzy against Zellweger. In perfect sarcasm, he began, "As there are only 69,000 articles covering her appearance at the Elle Awards — this is, after all, a person going to a place — we’re covering it on Trew News." In response to all the criticism surround Zellweger's eyes (which people deemed to be so changed that the actress couldn't possibly be herself any longer), he added, "Yes, it’s her eyes! Not any essential relationship with an unknowable entity, not her personal experiences that she’s been through, not her talent, or her charm, or her individual experiences as a woman — it’s her eyes, that’s what’s always made her herself."

Jillian Michaels, the notoriously famed Biggest Loser trainer, has said a lot of questionable things. When xoJane's Emily McComb's asked Michaels about her take on size acceptance and health at every size last year, Michaels responded with this:

Her accusation that anyone who claims to be happy, or feel beautiful and confident, at a larger size must be a liar was ignorant and cruel to say the least — and certainly didn't encourage body image in anyone. This year, Michaels opened up about her sexuality, telling Health Magazine:

"I don’t know that I am [comfortable talking about being gay] now, to be honest with you. The gay thing has always been hard for me. When Heidi and I are out and somebody older asks, ‘Are you sisters?’ I say, ‘We’re friends.’ I guess it comes from thinking that they will be shocked or disturbed. Look, I wish I had some strapping football player husband. It would be such a dream to be ‘normal’ like that, but I’m just not."

The "strapping football player husband" remark is a difficult one to stomach. Michaels' platform is huge. People love her. I'm of the mind that she should be using that platform to encourage not only positive body image, but positive representations of non-heteronormative relationships. In shaming this part of herself, she's shaming homosexuality as a whole. The struggle to come out is a real one. It sucks and it's hard and it can be hugely trying. But Michaels is out. And for her to embrace that would undoubtedly help a lot of her fans.

Girls actress and Glamour columnist Zosia Mamet opened up about her eating disorder in September, and whilst it may seem strange to include this news in the "best of body image" category, her article was honest, bold and an inspiration to anyone who has been (or is going through) similar issues. In it, she pleaded, "Let's diminish the stigma. Let's remind one another that we're beautiful. Maybe you'll help a friend. Maybe you'll help yourself. And if you're reading this and you're suffering, please know you're not alone. Tell someone: The people who love you will listen, I promise. And you'll feel better."

When Carolyn Hall's "6 Things I Don't Understand About the Fat Acceptance Movement" went live, people became rather reactionary. The thing is, it's OK to not understand fat acceptance. Most people have yet to even try. Most people have yet to understand that beauty comes in a all forms; that there are people who like being larger than a size 4; that being big isn't always a death sentence; that health does not really have a place in this discussion — because whether or not a person is "healthy" has no place in a conversation about treating a human being like a human being. But to claim that America is "accepting" of fat was just wrong. The quantity of fat individuals rising does not equate to the acceptance revolving those individuals rising with it. If that were the case, we'd also see a vast decline in eating disorders and severe, life-threatening body dysmorphia.

Last month, Keira Knightley's topless, non-photoshopped shoot went viral. In an interview with The Telegraph, she said, “I’ve had my body manipulated so many different times for so many different reasons, whether it’s paparazzi photographers or for film posters... [This shoot] was one of the ones where I said 'OK, I’m fine doing the topless shot so long as you don’t make them any bigger or retouch.' Because it does feel important to say it really doesn’t matter what shape you are.” And with that, she embraced her body and the taboo of having smaller breasts, and she encouraged us all to do the same. To not live via some impossible-to-achieve industry standard, but by whatever makes us, as individual beings, happy.