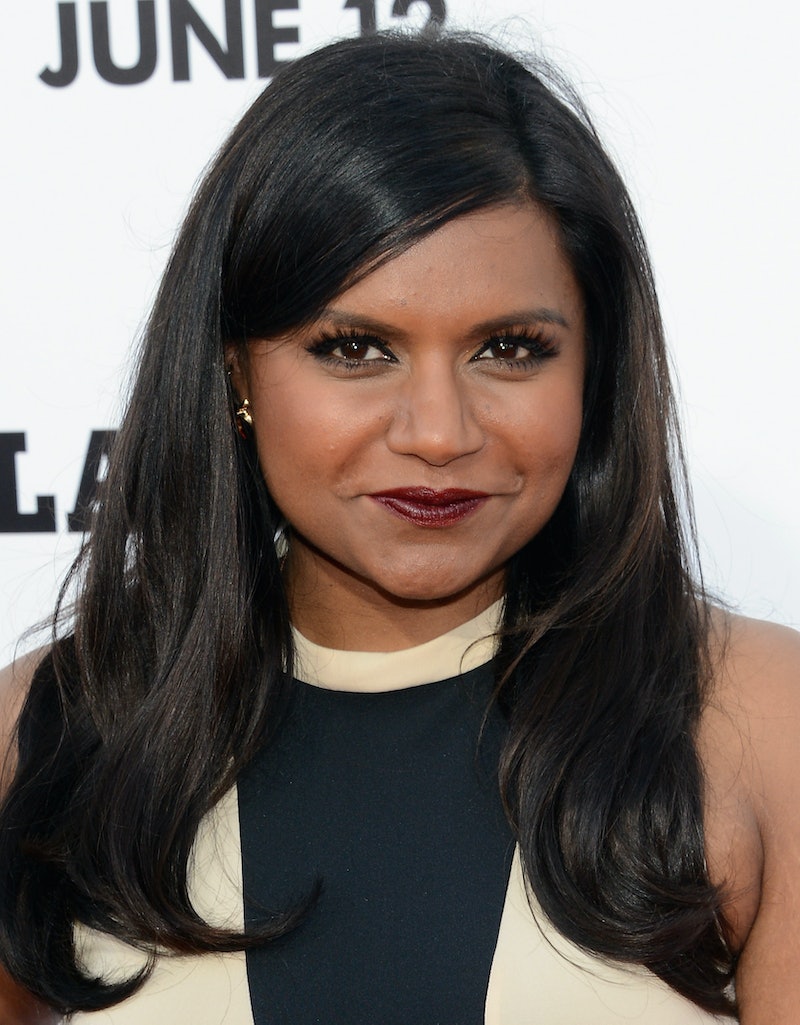 For those who've followed the career and life of Mindy Kaling closely, there are a few mysteries about her that have never been fully fleshed out: Will she conquer the world with her comedic savvy? Are she and best friend/one-time love BJ Novak dating again? And finally, is Mindy Kaling a Republican?

It's pretty well-known that Hollywood — at least in terms of on-screen talent and writers; it's a little more nebulous in the executive seats — is heavily occupied by varying degrees of liberals. There are exceptions, of course (Clint Eastwood, Melissa Joan Hart, Adam Baldwin, etc.), but by and large, Hollywood has long been part of what Fox News would refer to as the "lamestream media."

This is a story very familiar to one Mindy Kaling, It Girl of comedy, the multi-hyphenate star and showrunner of The Mindy Project.

When The Mindy Project's second season premiered last night, there was one line in particular that stood out to those who have long wondered about Kaling's political affiliation: When her [spoiler alert I guess?] fiancé asks main character Mindy Lahiri to marry her that very week, she responds, “Don’t you think that’s kind of rushed? It took me longer to get a permit for my handgun!”

This runs on TV during a time when the horrific trend of mass shootings has gun control at the forefront of the minds of many Democrats, so Salon took Kaling's character's comments as the catalyst for a piece on why Republican Mindy Kaling would include the line in her show. Tweeting afterwards to promote the story, Buzzfeed writer Kate Arthur proclaimed Kaling's Republican status. And then the actress herself responded.

Apparently, Kaling meant her Mindy Project character's comment as belonging solely to the latter, and not as much the former.

Regardless of Kaling's assurance, it's not exactly a mystery where Arthur (or Salon's Daniel D'Addario) got the idea that Kaling identified as a Republican: There are multiple instances of either Kaling herself or those who know her referring to her as pro-gun. Michael Schur, creator of Parks and Rec and Kaling's former co-worker on The Office, told an anecdote to Vulture about Kaling's desire to own a gun, as well as recalling a time when she was thinking about voting for Bush. (Schur is unsure as to whether she did or not.)

Kaling — who is also the subject of admiration on GOPCelebrities.com, which is apparently a website that exists — has also talked in the past about how both of her parents were avowed Republicans, as well as referring to herself in one tweet as a "new-money Republican" and as "way conservative" in one blog post. Of course, that blog post was also called "Why I Strike," and laid out why she was so vehemently supporting the 2007 WGA writer's strike.

Basically, there was a lot of (at least tangential) evidence supporting Arthur's idea that Kaling leaned GOP.

But we heard it from the lady herself, folks: Mindy Kaling is not a Republican. People do, after all, sometimes shift their opinions about politics, or at least certain aspects, so maybe that's what happened here. Or maybe she's always been a moderate, flipping back and forth between the two with the tides of the times. It happens. People contain multitudes. When people in the public eye contain those multitudes, however — especially an ardently talented woman of color in a position of power, as Kaling is— it often becomes the subject of exploratory articles.

It may be a while (or more likely never, unless you're seated next to her somewhere with a lot of time to kill) before the writer/actress explains to the public all the minutiae of her political standings. We may never know her status on issues like immigration, women's health, global warming, trans rights, or a number of other hot-button issues often discussed by the left wing. But hey, baby steps. She's still got a long career ahead of her.