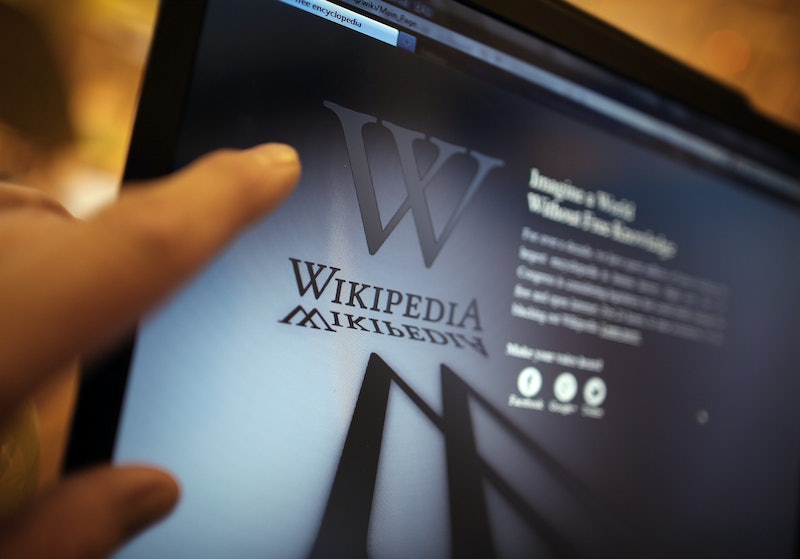 What were they thinking — that this would be a simple case of "out of sight, out of mind"? As if it weren't bad enough that the word torture was never used in the Senate Intelligence Committee's 525-page report, now the Senate is trying to delete torture from the Wikipedia article about the report, even though the term was used in a completely neutral context. The sneaky move comes after months of monitoring Congress's activity on Wikipedia through the Twitter tracking bot @CongressEdits, which has caught the government making edits on everything from the completely random to the disturbing. This would definitely fall under the latter category.

On December 9 and 10, @CongressEdits caught an anonymous user, whose IP address is registered to the U.S. Senate, trying to delete a line that described the CIA's enhanced interrogation techniques as "a euphemism for torture." Each time the user cited "removing bias" as their reason for the edit, but the deletion was overruled both times. What is exactly is biased about a seemingly factual statement?

At present, there's still a lot of contention over whether the term torture can be legally used to describe the techniques, and whether or not interrogators can be and should be prosecuted. Because there's been no official decision made to identify the techniques legally as torture, the user called out Wikipedia for suggesting otherwise. To say that "enhanced interrogation technique" is a euphemism for "torture" would be to imply that the acts do qualify as torture...

However, as we pointed out Tuesday, just because an official call hasn't been made on the legality of the techniques does not mean they don't qualify as torture. Anyone with common sense would consider the EITs that the CIA used torture tactics, indisputably. Furthermore, according to a memo provided by Assistant Attorney General Jay Bybee to White House counsel Alberto Gonzales, obtained by the Washington Post, the Bush administration followed the following legal boundaries of torture:

Physical pain amounting to torture must be equivalent in intensity to the pain accompanying serious physical injury, such as organ failure, impairment of bodily function, or even death.

Well, if this was the legal definition the CIA was basing its interrogations on, then the agency has plainly broken the law. According to the report, "serious physical injury" was inflicted on detainees (broken legs and feet) and then subject to further stress (forced to stand on broken legs and feet) after "impairment of bodily function."

Human rights groups, as well as the United Nations, are now urging President Obama to investigate the responsible CIA officials for prosecution.

[The report] should forever put to rest CIA denials that it engaged in torture.... By choosing to move on, to forget about the past, not to prosecute the serious crime, Obama is keeping torture as a misguided, wrongful policy option for some future American president.

Amnesty International is also calling for prosecution, based on the unquestionable basis that the CIA engaged in torture:

Torture is a crime and those responsible for crimes must be brought to justice. This was not some rogue operation.... It’s time for accountability, including a full investigation, prosecutions and remedy for victims.

In light of the overwhelming rhetoric using "torture" to describe the CIA's detention program, it's no wonder the Wikipedia user was fruitless in their edits. Wikipedia wasn't being biased; it was showing common sense.Images: Wikipedia

More like this
Sarah Everard’s Killer Wayne Couzens Is Appealing His Whole-Life Sentence
By Sophie McEvoy
How To Fight For Reproductive Rights, Based On How Much Time You Have
By Courtney Young
LGBT+ Men Fleeing Afghanistan Were Denied Asylum By The Home Office, New Findings Show
By Sam Ramsden
Celebrities & President Biden Are Enraged By The Leaked Roe v. Wade Decision
By Alyssa Lapid
Get Even More From Bustle — Sign Up For The Newsletter